About 6 weeks ago I predicted that Brazil, which at the time only had 1,000 cases/day, would see a huge surge comparable to Italy, due to being low-IQ:

But low-IQ nationalistic countries are not safe either. IQ is necessary, or otherwise the people are too dumb to take precautionary measures. Even if governments close the borders, that does little if individuals continue to infect each other from within. All the border does is define the size of the petri dish. They stay ignorant, well up until it is too late to slow the spread. This is why Brazil, despite only having 1100 cases now, is probably going to have as many as Italy. 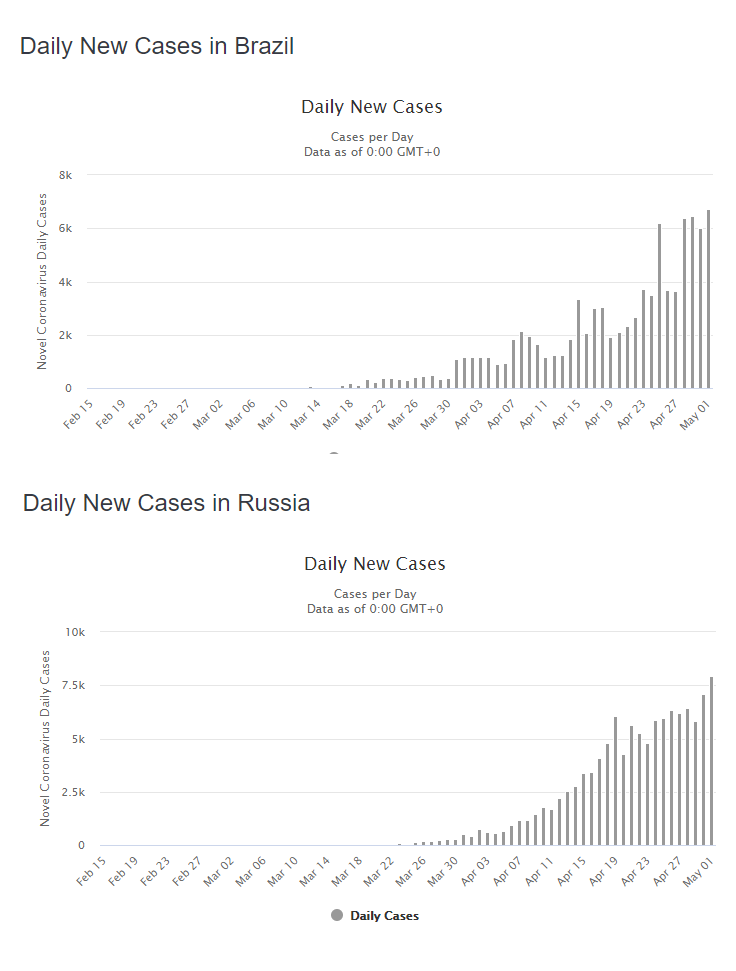 Sure enough, Brazil is at 6,000 cases/day now , for a total 97,000 as of writing this. When this is over, it will probably have at least a many cases as Italy has now (210,000). No surprise that a low-IQ, incompetent country such as Brazil, that fetishises soccer and butts, is seeing a surge in cases in spite of having 2 months of forewarning (it took about 2 months for the virus to make its way from China to Brazil, giving Brazil ample time to take precautions). Turkey and Russia also saw similar surges, in agreement with the HBD thesis. Russia’s IQ is higher than Brazil, but its government is incompetent. No shocker that a country known for email spam, copious vodka consumption, and mail-order brides, dropped the ball despite having 2 months of forewarning. A reason why low-IQ countries are at such high risk is because the people are oblivious and do not change their behavior. In smarter countries, people will subconsciously change their behavior such as minimizing close contact with each other. Also, low IQ countries, culturally, tend to have more touching (cheek kissing in Middle Eastern countries and Spain, vs bowing in East Asian countries). Also, this virus is having a eugenic effect, too, in that the death rates are also higher in low-IQ countries. Germany, Japan, Korea, and Singapore, which are high IQ, have a much low death rate than Peru, Columbia, Brazil, Italy, Spain, and Russia. This IQ-prognosis disparity is also observed within the US, with smarter states such as California and New York having lower death rates compared to less intelligent states such as Louisiana.