But also subversivness plays a role, related to the “weird twitter” phenomenon discussed above, and 4chan ‘meme’ culture. Older people don’t get the jokes, but rather take them literally, and by being outraged, spread the memes to those who who understand. Or the memes can actually affect public discourse. 4chan users can change society, not through legislative policy or public office, but by getting the media’s attention, who then disseminate the memes (often not the image itself but the social significance it entails and signifies) to the masses through the bottom-up meme prorogation process, until it becomes a part of the general discourse and ‘collective consciousness’. So the process begins on 4chan, 8chan, and maybe Reddit and Twitter, gets picked up by Vox, Washington Post, The Atlantic, and then gets shared by ‘normies’ on Twitter and on Facebook. The final iteration is often heavily editorialized from the original meme, but the underlying message remains the same through the process.

From The ‘Metamodern Condition’:

It’s like a giant cargo net, in which by tugging one of the corners, however slighlty, the entire net moves. Posts on ‘weird Twitter’ can reverberate to the alt-right and on the alt-lite, which spread to Reddit’s hugely popular /r/politics, and 4chans’s /pol/, and then also picked up by Vox media, Quartz, and other more mainstream publications. Nothing is too small or insignificant to be amplified. Social media puts a microscope and stethoscope to everything. A small campus demonstration/protest gets tweeted, which gets re-tweeted by a large account, and then it gets posted to Reddit and 4chan, and then picked up by Vox and Qz, becoming in less than an hour a full-fledged story. But at the same time, the elite and smart of the world–such as journalists, politicians, the rich Chinese, and elite college students–have a microscope/spotlight on social media. Some of the smartest, most influential people in the world read Reddit, Twitter, Tumblr, /pol/ etc. to take the pulse of the ‘vanguard’ before it becomes propagated. By posting on pol, you’re effectively a representative of your ‘tribe’ broadcasting a message read by these elites, and if the message is compelling or interesting enough, it will be propagated. The irony is that although the far-right is nationalistic, 4chan and Reddit are international communities. It’s sorta like the UN, where representatives of all countries converge in single location.

That’s why the mainstream media such as Vox and The Atlantic is tuned into 4chan and Reddit for what is important and newsworthy, because inchoate sentiment is expressed in meme-form on those sites.

To go on a digression, consider two authors: author A, who has a large audience that was built in the ‘old’ era of online journalism from the ’90s up until around 2010 or so, and a second author, B, who has a tiny or non-existent audience. The apparent viralness (in terms of page views) of the first author is not attributable to any special insights on A’s part, but because he built his audience in an era when the intellectual barriers to entry were lower, so in spite of a more challenging and intellectualized environment, he’s till able to retain a loyal following. Such examples include Pat Buchanan and Ann Coulter. But for reasons described above, in spite of A’s large audience and traffic, his impact on the ‘national dialogue’ is limited or non-existent. Right now, everyone is talking about ‘clown pepe’, which was conceived on 4chan; before that, it was Q-anon and pizza-gate, both of which originated on 4chan and were picked up by the mainstream media, affecting the national discourse in the process, but no one really cares outside of talk radio what Mark Levin or Sean Hannity says. Consolidation and increased competition has made it much harder for new authors employing the reductionist, overly partisan approach of author A to find success, so in order to win over the intellectual gatekeepers who hold the keys to viralness, author B has to employ the stylistics of ‘new’ online journalism.

Screenshot of the ‘wall of links’ method: 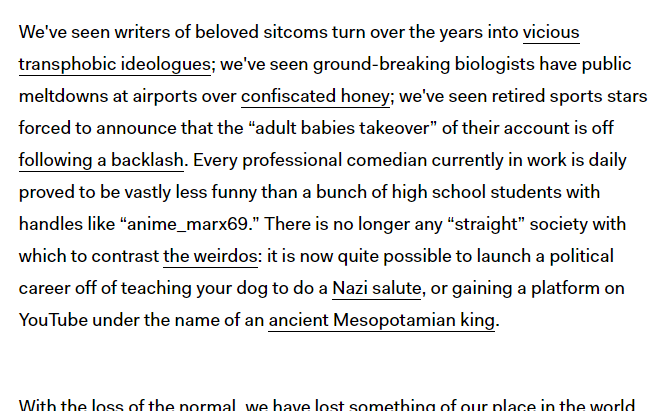 Regarding narratives, whereas the mainstream-left and mainstream-right are fighting age-old culture wars that ceased being as relevant, the high-IQ right & left on social media care about deeper, more existentialist matters, as well as economics and other ‘great debate’ and shared narrative topics. Each story, whether it be about gender bathrooms, campus protests, etc., is a puzzle piece or node of a larger tapestry/system/narrative, with everything interconnected, whereas the mainstream-left and right treat such events in isolation and are not ‘plugged in’ or participants of this grand narrative.

Regarding participation versus detachment, the ‘old school’ media are like reporters, from a distance, rather than participants. It’s like gonzo journalism, but extended to include everyone as participants even if they aren’t physically there. A story about campus protests isn’t just an isolated event that affects only students of that school, but affects everyone connected on these social networks, who are connected through shared narratives and demographics. A reason why millennials and gen-z care so much about campus protests and economics is because they are both participants and on-the-ground reports of such issues.