Facebook stock is surging higher on yet another quarter of huge earnings:

Morgan Stanley analyst Brian Nowak believes ad sales will only grow bigger with Instagram’s promise as an e-commerce tool. In raising his price target on Facebook shares to $195 from $190 on April 9, Nowak estimates Instagram could add $4 billion in incremental sales by 2021 as advertisers and companies connect purchases to their digital apps.

“We believe investors will continue to gain comfort with the incremental financial risk created by content and privacy concerns while at the same time usage trends have remained solid,” Guggenheim analyst Michael Morris said in a note this month. He maintains a Buy rating and price target of $200.

As wrote in 2018, I was correct about the privacy concerns not being a big deal and that Facebook stock would recover all its losses:

I predict Facebook, Microsoft, Amazon, and Google will each be worth $2 trillion dollars. It’s like the 90’s all over again but with much lower valuations (Facebook’s PE ratio is only 24, versus 100+ for Cisco and Oracle in 1999), no bubble, bigger earnings and fatter profits, no crash, bigger gains, and it will continue for many more years to come, possibly a decade or longer before there is a bear market. Even as far back as 2013-2015 in the blog archives I was correct about there being no crash. The Nasdaq 100 PE ratio is still in the low 30’s, versus 100+ in 2000: 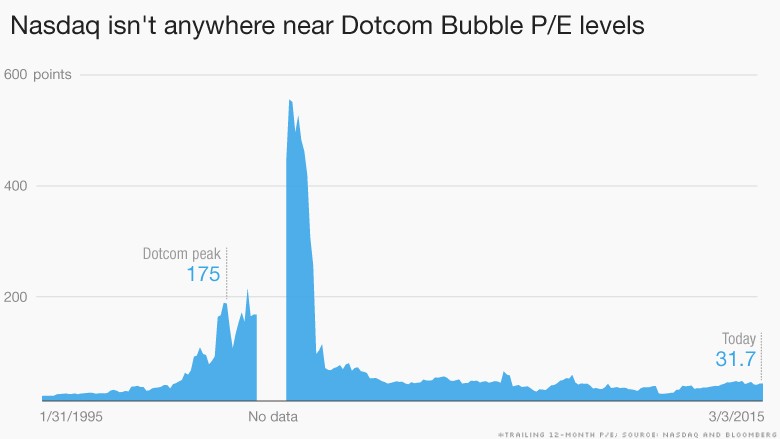 The major difference between now and the ’90s is that the gains are limited to maybe only a dozen mega-sized tech stocks, whereas in the ’90s everything was indiscriminately bid higher. Valuations are much lower. As discussed in Post-2008 Capitalism: A Guide, this is an example of capitalism becoming smarter and choosier, because capital is chasing after only a handful of the biggest and most successful companies instead of being spread thin among a bunch of smaller companies. There’s no need to speculate on small, weak companies when investing in Facebook and Amazon can generate consistent 30+% annual returns on capital.

This is supposed to be a bad time for the global economy. The IMF forecasts a sychronized slowdown, with 70% of the world economy expected to record weaker GDP growth this year. Just a few weeks ago, bond markets were sending ominous signals that usually signal a recession is near.

These forecasts are useless. The slow growth is limited to weaker foreign economies, as the US continues to pull ahead of the rest of the world economically.

I predict the S&P 500 will post 15-25% annual returns for the next decade, and no recession. Interest rates and valuation are still low. 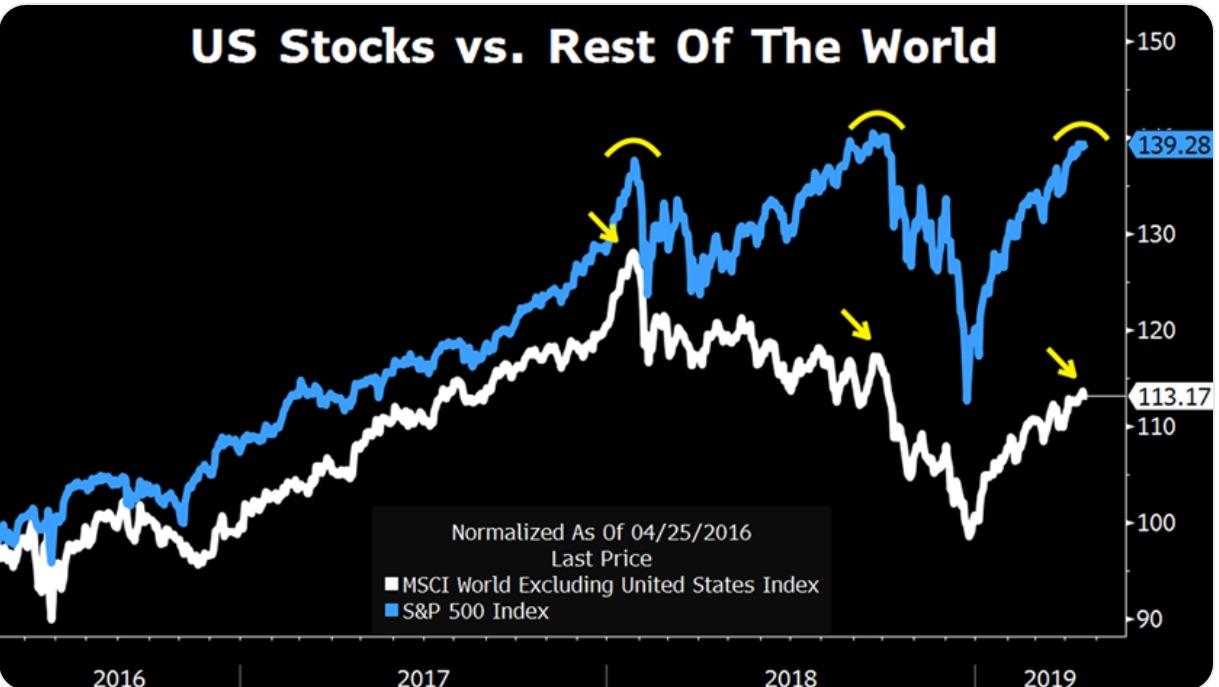 I saw the above chart posted on Reddit, which was massively up-voted.

From the post: Foreign Stocks Don’t Belong in Your Portfolio:

People on Reddit and hacker News are implicitly aware of the HBD-investing thesis. When you explain it to them, they understand it and it makes sense on an intuitive level (but also backed by empirical data) that high-IQ countries and companies should have superior inflation-adjusted and dollar-adjusted economic growth and stock market gains compared less intelligent countries. But also, America’s culture of individualism and capitalism also helps greatly, so when combined with high-IQ, is a very hard combination to beat. The high concentration of capital among high-IQ regions and companies is great for investors, whether it’s Bay Area real estate or Facebook or Google stock.