A question that I didn’t address in part 1 is, why is IQ so important for investing? What is the mechanism that explains why high-IQ stocks, assets, industries, and countries do so well compared to average & low-IQ ones.

The answer has to do with how wealth is concentrated, in that high-IQ entities concentrate wealth at a higher density than less intelligent ones. When inventing, you want as much wealth as possible concentrated in your particular investment.

From Human Varieties, IQ and Permanent Income: Sizing Up the “IQ Paradox” one can see the positive correlation between national IQ and GDP per capita: 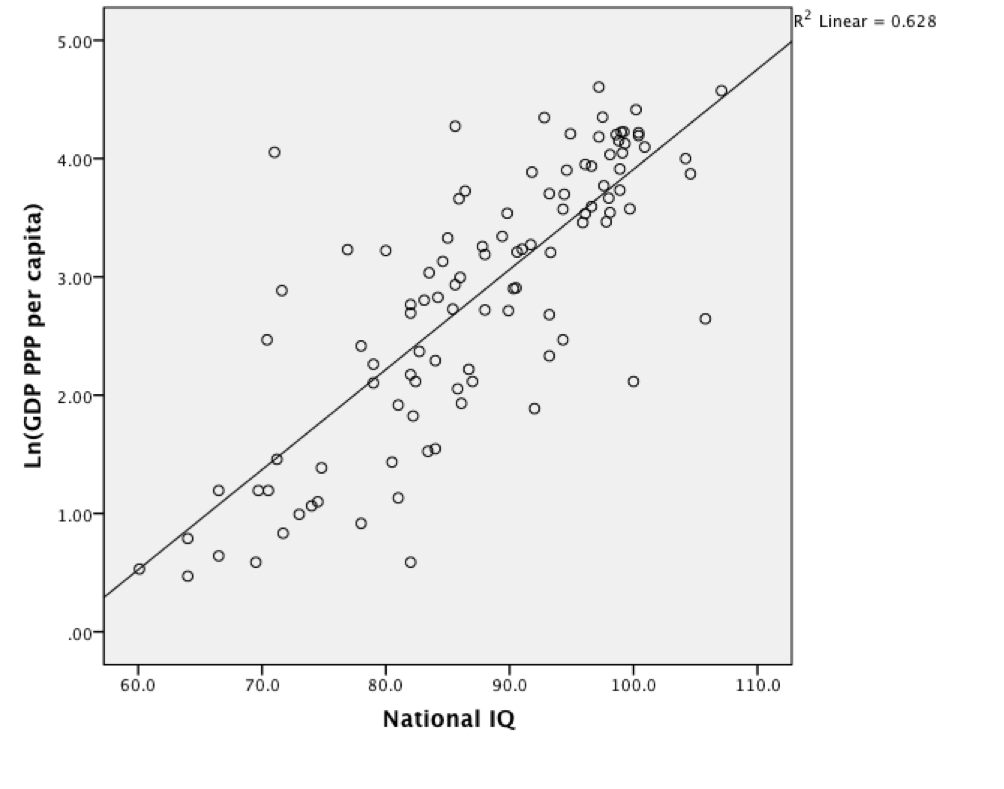 But then why do high-IQ entities concentrate wealth so well? The answer has to do with market share and intellectual property. Consider a hypothetical medium-IQ business, Co. A, such as mining or drilling. Microeconomic theory says that under perfect competition profits will eventually converge to zero. If Co. A posts real, inflation-adjusted profit growth, a competitor (called Co. B) will come along and reduce A’s profit growth. Eventually, even if the total industry grows, there will be enough companies that none of them will have excess profits when adjusted for inflation. Investors in Co. A, B, etc. will not make excess returns even though the country, GDP, industry, etc. is growing. The same for real estate. Because without excess profits, there cannot be excess wealth. Without excess wealth, there cannot be neighborhoods with excess concentrations of wealth (like we see in Manhattan and Silicon Valley), so this means as soon as dollar-adjusted home prices rise too much, more homes are built or people move ‘outward’, such that home prices don’t go up much, even if the country is growing as measured by total GDP. This puts a cap on US-dollar adjusted returns, which is bad for investors.

High-IQ businesses take advantage of ‘intellectual property’ and ‘network effects’, which are hard to replicate. Because steel, oil, coal, and fertilizer are commodities, it’s not not like someone can replicate IBM, Google, Facebook, or Microsoft in the same way someone can replicate a steel, drilling, or mining company. Such irreproducibility and lack of competition can yield enormous windfalls for investors. Indeed, as shown below, the highest inflation-adjusted market returns were in the 50′s and 60′s (the first computer boom) and the 80-90′s (the microcomputer, communications, and internet boom): 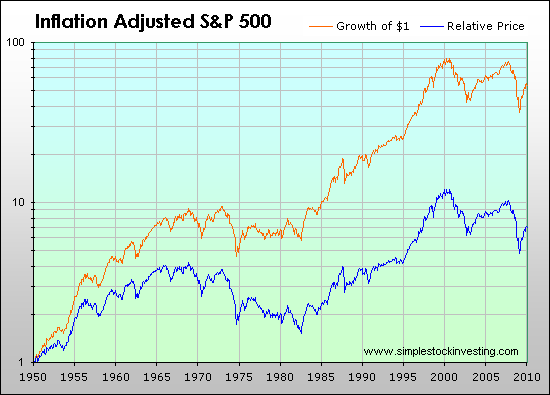 As shown in the post Will Silicon Valley’s Tech Fortunes Dissolve like the Rockefeller, Carnegie, and Vanderbilt Fortunes? No, an investment in US Steel in the early 1900′s, 100 years later, lost 75% of its value on an inflation-adjusted basis. IBM, however, gained over ten-thousand percent. Ford and GE similarly posted poor inflation-adjusted performance (and GM went bankrupt).

The post-2009 stock market boom, again, is being lead by tech, mainly Google, Apple, Microsoft, Amazon, and Facebook. These companies, unlike the PC and video game manufactures of the 80′s and 90′s, have business models that are even more resilient and immune to competition, because there is much less risk of commoditization.

The concentration of wealth in America’s technology sectors spilled over to the real estate market, too, with real estate in Silicon Valley and Manhattan posting among the highest returns since 1980, more so than any other region in the world. This continues to this very day, even though prices are very high.

During the 2013-2014 fracking boom, there were hundreds of tiny up-start drilling and fracking stocks, but because no single company had much of an advantage over any other one, when the boom collapsed, so too did all those companies. With such scant profit margins and so much debt, they could not weather the oil price decline, and investors and especially bond holders were ruined. Meanwhile, high-IQ stocks like Facebook and Google kept going up. A similar pattern was observed in the 2004-2008 housing and construction boom & bust.

Although Nike and Disney are examples of less intelligent business that have market dominance and brand recognition, their products are easier to reproduce than, say, Google , Amazon or Facebook. Disney is just an entertainment company; Nike is just an apparel company. But technology companies like Google, Microsoft, Amazon, and Facebook are the infrastructure itself, much like GE and PG&E. I look at it this way, if said company vanished overnight, how much disruption would there be? Could another company easily fill the void? How much media attention would its absence get? If the answer is ‘not much’, then it’s likely not a good investment. Amazon vanishing would be a much bigger deal than Nike or Disney vanishing. Apple’s and Microsoft’s product launches get much more attention than the latest Disney attraction or the latest iteration of the Air Jordan. To get an idea of how important Google is, just look at all the media coverage a harmless memo written by a former Google employee purporting the existence of gender differences, got.