I last checked Tooleb’s Twitter 2 weeks ago, and just by chance I dropped in to see if he is still whining about IQ, and sure enough he is. This guy is a walking punchline.

Here he is insulting Peterson again, with the ‘fancy math’ that is supposed to show how smart he is to his followers (even though it’s just graduate-level stats, and he’s wrong):

The IQ situation even worse. Found that here is no correlation IQ- income/wealth at highers levels EVEN FOR LOW IQ.

Hence the math used for “g” fails. Psycholophasters do not seem to know what correlations mean under nonlinearity.

And, BTW @jordanbPeterson is a quack. pic.twitter.com/BCN3Z1JMYt

Same story for income. Above average income there is NO correlation. A “low IQ” person as likely to get a higher income. pic.twitter.com/SlMgwgWuoc

The above scatter plots were taken from the 2007 paper Do you have to be smart to be rich? The impact of IQ on wealth, income and financial distress, (Zagorsky, J. L.).

I originally saw that Taleb posted the above scatter plots a month ago, of course without a link to the original study. A link to the study was posted in the comments by someone else, but it is paywalled.

But more importantly, the abstract contradicts Taleb’s thesis on income versus IQ…which shows he didn’t even bother reading it or he hopes his followers won’t notice:

How important is intelligence to financial success? Using the NLSY79, which tracks a large group of young U.S. baby boomers, this research shows that each point increase in IQ test scores raises income by between $234 and $616 per year after holding a variety of factors constant. Regression results suggest no statistically distinguishable relationship between IQ scores and wealth. Financial distress, such as problems paying bills, going bankrupt or reaching credit card limits, is related to IQ scores not linearly but instead in a quadratic relationship. This means higher IQ scores sometimes increase the probability of being in financial difficulty.

Here is an excellent blog post from 2007 that debunks Taleb’s misconstruction of the Jagorsky study. All it took was 20 minutes for Google searching to refute Taleb’s thesis, that all of his hundreds of thousands of followers failed to see:

…But wait, what does this look like graphically? Taking the data from Table 2 of the Jagorsky article and plotting the relationships of IQ with net worth on the left axis and income on right axis, you get a graph like the one at the top of this blog post (see above)

Yes, the low correlation between IQ and wealth does, in fact, mean that low IQ does not doom a person to poverty and that high IQ does not guarantee wealth. However, the difference between the median net worth of the lowest IQ category ($5,775) and that of the highest ($133,250) is hardly trivial. To make an analogy, your basketball skills wouldn’t be that much better if you grew an extra inch. However, to claim that height is irrelevant in basketball is utter nonsense.

The Jagorsky article is not claiming that there is no relationship between wealth and IQ. It does, however, claim that this relationship disappears after controlling for a number of sensibly selected variables such as age, marital status, education, race, inherited wealth, and so forth. If these variables were uncorrelated with IQ, the interpretation of this finding would be straightforward. Unfortunately, many of these variables are robustly correlated with IQ and this makes the interpretation of the findings rather difficult.

Here is the chart Taleb will not show, which is derived from the Jagorsky study and refutes his IQ-does-not-matter thesis: 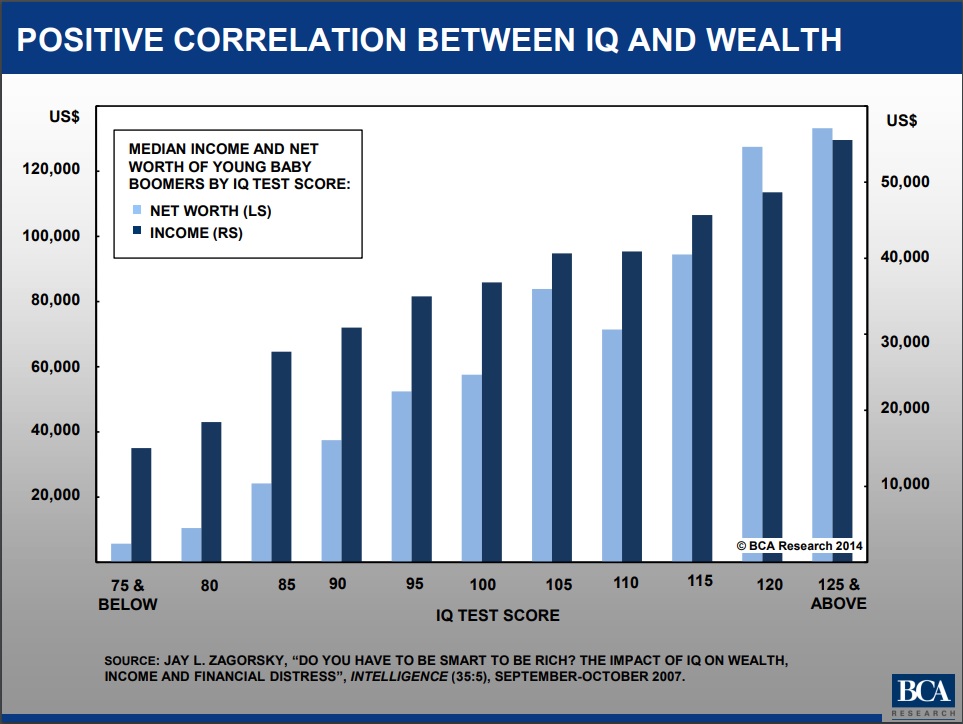 This shows a positive link between IQ and wealth and income, but this relationship diminishes when one controls for a bunch of variables. However, it’s possible for someone to have negative or low net worth and still have higher earnings potential in the long-run than someone with a low-paying job and an initially higher net worth. A 20-year-old who is in $50k in debt for a computer science or finance degree, technically, has a negative net-worth, but in the long-run comes out way ahead of someone who works at Starbucks and has no debt.