So going back to foreign stocks, although the efficient frontier curve shows that a mix of U.S. and foreign stocks can slightly boost risk-adjusted returns, I would not bother with foreign stocks at all, and they have no place in a portfolio (foreign bonds may be a different matter, but for this post I am just focusing on stocks). Much of excess returns of foreign stocks are from the mid 80’s due to Japan’s asset bubble, and it’s unlikely this will ever repeat. When one compares foreign performance vs. U.S. performance, over long time frames, foreign stocks have slightly worse annualized returns and higher volatility, therefore making it an inferior investment compared to U.S. stocks. Foreign stocks do not diversify-away risk, because they are highly correlated with U.S. stocks. This is especially true since 2011. When foreign stocks outperformed in 2002-2007, such gains were negated by the crash of 2008 and again when they crashed in 2011. Foreign stocks lagged the S&P 500 considerably from 2013-2016. 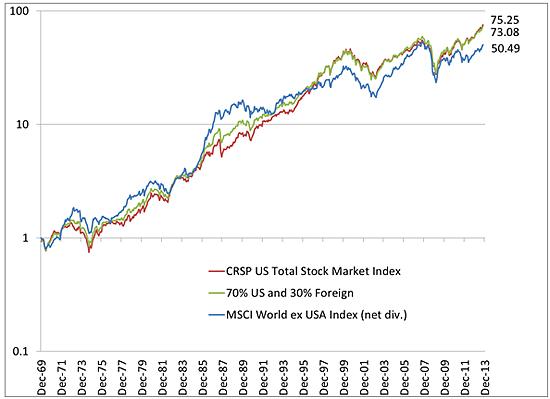 When one goes as far back as the 1930’s, again, foreign stocks are inferior: Why would anyone knowingly and willingly invest in inferior stuff. If given a choice between a 5-foot-tall basketball player and a 6-foot-tall one, the latter is virtually always a better pick. And similar to the impossibly of an adult growing a foot, the trend (with the possible exception again of China and Singapore) is for weak countries to remain weak. Cultures and national IQs don’t change. Brazil’s low IQ population and culture of corruption and ineptness is not going to change overnight, if ever. The U.K., unlike the Silicon Valley or Shanghai, is not going to become a ‘mecca’ for tech. Same for Germany, which due to ingrained social and cultural factors, will never become as economically competitive and innovative as the United States. Even when foreign countries have growth spurts, the gains are always given back during recession or crisis, whereas the U.S. economy keeps its gains. Low-IQ regions are dependent on exporting natural resources, which tend to more volatile, for economic growth, as opposed to intellectual property, which requires a high IQ but is more stable. Brazil and other Latin American countries had growth in the 2000’s due to the oil boom, but all of those gains were erased due to commodity prices falling and corruption in the decade that followed. Same for Russia and Turkey. They do well for 5-10 years and then collapse like a house of cards and do not recover.