A recent article by Peter Turchin, The Ginkgo Model of Societal Crisis, went viral and was shared on Vox Day and elsewhere, so I figured it merited a response.

It will soon be two years since the US presidential elections of 2016, which should have made it clear to everybody that our society is in deep crisis. The technical term in the structural-demographic theory (SDT) for it is a revolutionary situation: when the established elites are still holding the levers of power, but the social pressures for crisis have built up to the point where something has to give.

Hmm…the empirical evidence shows otherwise. As predicted in Sep. 2015, the economic crisis is in Turkey and Brazil, not the U.S. or China. Three years later, it looks like I was right again as Turkey, Spain, Brazil, Venezuela, and Russia slide further down the chute to perdition, all while the U.S. continues to out-perform the rest of the world on a wide variety of metrics: social stability, low corruption, strong stock market returns, low inflation, strong corporate profits & earnings, strong consumer spending, innovation, strong U.S. dollar, low bond yields, and so on.

Right now, the economy of Brazil is suffering from a crime wave as well as corruption and currency collapse, as reported by the Financial Times

The report by the Brazilian government was released days after government think-tank IPEA and the Brazilian Forum on Public Security (FBSP) revealed in a study that the country’s homicide rate exceeded 30 per 100,000 in 2016 with 62,500 murders, the highest ever recorded, and about 30 times more than in Europe. Between 2006 and 2016, 553,000 people were killed in Brazil, said the IPEA/FBSP study, more than in the seven-year Syrian civil war, according to the Syrian Observatory for Human Rights.

And the United States has much lower homicide rates than South America: 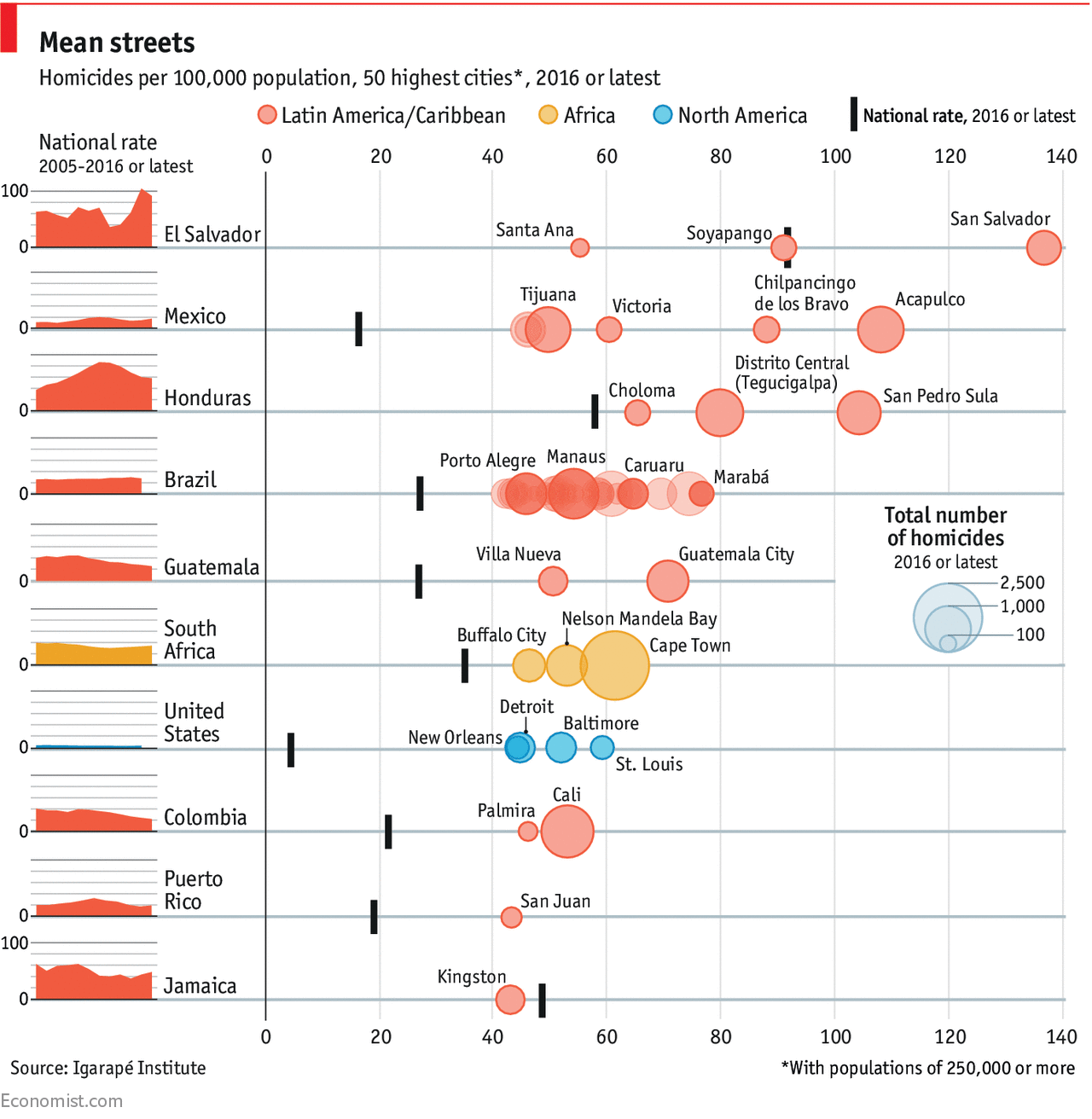 This agrees with posts I wrote in 2015 about Brazil being in crisis mode, not the Untied States. The civil unrest in Rio and other Latin American cities makes Charlottesville, as bad as it was, a walk in the park by comparison.

I was right in 2016-2017 in predicting no social instability as a consequence of Trump. I was also correct in predicting no recession either. The except opposite happened: Trump surpassed even the most optimistic of expectations. The riots and crisis that to the pundits in 2016 seemed ‘so obvious and inevitable’ never came, except the occasional campus protest or rally. Tim Urban of Wait But Why was raked over the coals by his readers for his optimism that Trump would not tear America apart, and saying so cost him a sizable chunk of his readership and may have ultimately doomed his once-popular blog. He paid the price for intellectual honesty.

Look at it like this: Trump may be bad, but the U.S. economy and society is strong enough–that as bad as Trump may be–the economy and overall functioning of the U.S. is impervious. Meanwhile, the fragile economies of Turkey and Brazil are at the mercy of their leaders. A corruption scandal in Brazil is an economic crisis, whereas in the U.S. it’s just a bad news cycle.

Regarding the tired and wrong narrative of ‘elites losing power’ or ‘Trump being bad for elites,’ again, the evidence shows otherwise. With the stock market constantly making news highs and the post-2009 bull market and economic expansion the longest and biggest ever, the Wall St. elites are in a stronger position than ever. With Boeing and other defense stocks at historic highs, the defense elites are stronger than ever. The Silicon Valley elites are not losing sleep over Trump and continue to ban right-wing content creators. Uber is still worth $60+ billion. Facebook, Google, and Amazon worth nearly $2 trillion combined. Apple recently eclipsed a $1 trillion valuation, the first ever for any publicly traded company. Hardly losing power. The site predicted this last year.

What I found remarkable as we have lived through the past two years (indeed, the past eight years since I made my prediction of the impending crisis), is how precisely we today are following the trajectory into crisis that my colleagues and I saw in the historical societies we have studied.

Uhhh…the past eight years have been the exact opposite. The Post-2008 bull market and economic expansion is a period of unprecedented social and economic stability. What he is saying flies in the face of empirical reality. This guy is just literally making stuff up now. Steven Pinker’s thesis of the so-called ‘long peace’ is looking much more accurate than these repeated cries of crisis. Same for the ‘great moderation’, which after a hiccup in 2007-2009 is back on track.

The fundamental drive (a kind of a “pump” that drives up social pressure) is the oversupply of labor, which developed after the 1970s as a result of multiple interacting factors, and more recently was made acute by technological change driving automation and robotization. Oversupply of labor is the root cause for both popular immiseration and elite over-production/intra-elite competition. Both of those factors, then, contribute to the fiscal crisis of the state, because immiserated population can’t pay taxes, while the elites work to reduce the taxes on themselves.

It’s obvious that higher unemployment is correlated with unrest, but the difference is such unrest is not in America. It’s in Greece and Turkey, which have higher unemployment rates and weaker economies. The U.S. is an especially fortuitous position, in that it can raise funding readily by selling cheap debt, which allows taxes to remain low and entitlement spending high, whereas smaller and weaker countries have higher rates of borrowing. Also the U.S. dollar being the global reserve currency helps too.

David Graeber in Debt explores this:

It is Graeber’s virtuosity as an anthropologist that he can extend his social and political analysis of debt to the geo-political scale. U.S. economic power has succeeded in making the dollar the world’s “reserve currency” – the preferred medium of exchange in international commerce. This means that the U.S. Government can “create” money out of thin air by selling U.S. Treasury bonds to internatioinal investors. This makes the U.S. a debtor nation, but the fact that it controls the currency of debt – and commands overwhelming U.S. military power – means that it will never really have to repay its debt. (Even better, the value of its debt will depreciate over time!) The U.S. debt is simply rolled over indefinitely – for now.

The meaning of U.S. debt has a lot to do with U.S. power. Graeber notes that “it’s never clear whether the money siphoned from Asia to support the U.S. war machine [through the purchase of U.S. Bonds] is better seen as ‘loans’ or as ‘tribute.’” But it is clear, he writes, that “American imperial power is based on a debt that will never – can never – be repaid.”

The U.S. will continue to escape any reckonings (at least for now) because its imperial economic and military power enables it to control the world’s default currency. When and how the “tribute” that China is now paying (by buying U.S. bonds) turns into “loans” (i.e., something that actually has to be repaid, not rolled over) may be one of the great geo-political shifts of the modern era.

Similar to Japan, America’s reserve currency status and ability to raise capital to fund entitlement spending, helps stave off potential unrest. Weaker economies have to resort to austerity, which is unpopular.

Political violence has also reached new heights, although thankfully mostly demonstrators and counter-demonstrators are beaten up, not killed (a major exception was Charlottesville a year ago).

As discussed here, here, and here, the evidence suggests there is less civil unrest now than decades ago. In 1967 alone over 159 cities experienced race riots, compared to the four or so protests that happen every year now. Due to social media and the 24-7 news cycle, unrest is being over-reported, whereas decades ago it was under-reported. Incidents that decades ago would have been ignored/unreported are immediately plastered all over Fox, Facebook, Twitter, and YouTube, to be immortalized digitally. The rise of Malcolm X’s black separatism and Martin Luther King made a ‘race war’ a definite possibility, and the U.S. govt. was making contingency plans for such an outcome. This strife continued on and off probably until the 90’s, when things suddenly died down.

Another argument is that increased immigration will lead to unrest. Again, the evidence does not bear itself out. Despite increased immigration into the U.S. since the 1990’s, unrest has not gone up. A possible reason for this is that both sides benefit from immigration; for the ‘left’, they benefit from expanding the electorate; for the ‘right’, many of these immigrants are Catholic and are potential source of cheap labor. Many conservatives want immigration reform and see non-Christian immigrants as potential converts to Christianity. If America’s immigrants were mostly Muslim instead of Catholic, there would perhaps be less tolerance, but even after 911 U.S. views of Muslim Americans did not fall. If could be that Americans are exceptionally tolerant of immigration.