excellent article Exponential correlation of IQ and the wealth of nations

Is it any coincidence high-IQ countries, high-IQ stocks, and high-IQ asset classes, going back decades, have outperformed low-IQ ones?

Positive correlation between national IQ and GDP per capita: 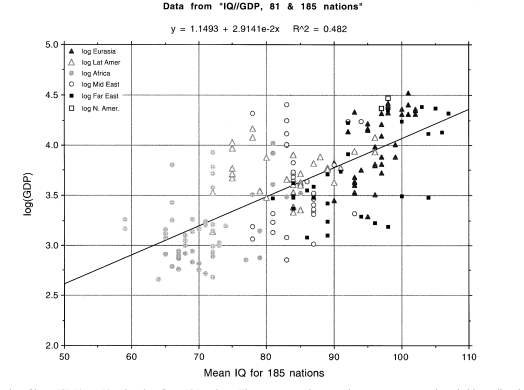 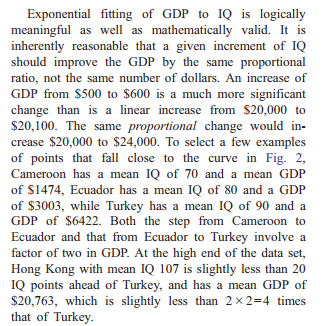 Note how they measure it by GDP per capita instead of total GDP. This is an important distinction because low-IQ countries such as Brazil have a higher total GDP but lower per-capita GDP than smaller but high-IQ countries such as Hong Kong ($1.7 trillion vs. $320 billion). A higher per capita GDP implies a higher concentration of wealth, as discussed in HBD & Investing, Part 3 (IQ and the concentration of wealth), which is important from an investing standpoint [2]. When investing, you don’t want more total wealth, but rather wealth that is more concentrated among your particular investments. Silicon Valley real estate (such as Palo Alto) and tech companies (such as Facebook and Google) are an example of how extreme wealth concentration can yield superior investor returns on an inflation-adjusted basis. The S&P 500, which has a lot of high-IQ companies and sectors such as financial services, payment processing, and information technology, has for decades significantly outperformed foreign markets. And within the S&P 500, tech has outperformed everything else. Even after factoring in the 2000 dotcom crash, the out-performance still persists. Since 2009, this trend has accelerated markedly, with the Nasdaq beating the S&P 500 by 10%/year on an annual compounded basis, yet the Nasdaq is not anywhere near as overvalued as it was in 2000.

Regarding real estate, expensive high-IQ regions have, since the early 80’s [1], significantly outperformed less intelligent regions. Due to factors such as scarcity, the booming tech economy, and foreign demand, Bay Area real estate made new highs as early as 2013, but many regions such as Las Vegas, Miami, and Houston, are still below their 2005-2007 peaks. But unlike less intelligent regions, Bay Area home prices are also much less susceptible to corrections, which is why pundit predictions of a Bay Area housing bubble keep being wrong. Even in 2013, the left was saying it was a bubble, and 4 years later not only have prices not fallen, they have continued to rise (but that doesn’t stop the media from trying to call a top even though they have been wrong for the past 4 years). This is because high-IQ tech does a better job of not only concentrating wealth, but also maintaining it, whereas less intelligent regions like Las Vegas have more cyclicality.

The problem is, due to low barriers to entry and other factors (high-IQ businesses have high barriers to entry and intellectual property, which are trademarked but also hard to replicate), less intelligent industries don’t concentrate wealth as well as smart industries, but also less intelligent businesses take on too much debt due to high time preference and general ineptness of management that is to be expected of the less intelligent, I suppose. A notable example of this is Chesapeake Energy, whose CEO, Aubrey McClendon, nearly drove the company to bankruptcy due to proliferate spending, and then killed himself by plowing his car into an embankment the day before a federal indictment for conspiracy.

How HBD can be used to beat the market, part 2: Predictions & Stock Picks

Don’t Bet Against America (America as an HBD success story)

[1] This is not a coincidence, and the early 80’s coincides with the early stages of the personal computer revolution, the beginnings of the rise of East Asia, the rise of Silicon Valley, and the financialization and digitization of the US economy.

[2] The inability of countries to concentrate wealth on a per-capita basis is described by some economists as the ‘middle income trap‘:

It’s evident there is a positive correlation between IQ and escaping the trap, whereas less intelligent countries are stuck.