Here is an example of one of the more common arguments that we’re in a tech bubble and or that the reign of Amazon, Google, Microsoft, and Facebook are unsustainable:

The largest market cap companies in a given decade, overwhelmingly tend to be under-performers in the following decade. It’s a trend that has repeated decade after decade. Many of these types of companies – AMZN, NFLX, GOOGL, FB – have pulled a massive share of their future returns forward (which is what happened to Microsoft, stagnating its stock for ~15 years).

Is Amazon going to grow into a $2 trillion market cap over the next ten years? No, there is zero possibility of that happening. It’ll be very lucky to grow into its existing market cap today, over that ten years. Keep in mind, they have $100 billion in retail sales, generating Walmart style margins on that business; Walmart has ~$450 billion in retail sales, generating ~$15 billion in net income. For that, Walmart gets to trade at half the market cap of Amazon. That’s Amazon’s future value compression. That multiple erosion won’t occur until the market starts to realize the AWS growth machine isn’t going to last forever (AWS representing a very large portion of the Amazon stock appreciation the last three years), as that growth curve slows in the next few years, the market will push down on Amazon’s present extreme premium.

Netflix has a ~200 PE ratio, there is no means for it to ever justify its existing valuation (400 million global subscribers? no chance), much less a far higher one. Their present business model has never proven the ability to produce good margins, content has perpetually sapped their earnings potential and is likely to continue to do so.

Facebook and Google will stagnate and grow into their valuations. Google particularly is trading far beyond where it should versus its now modest growth rate. ~37 times earnings, $700 billion market cap, for 10%-15% annual growth over the next five years? No thanks. In the not very distant future, Google will pull a Microsoft and begin paying out a dividend, after this latest stock market bubble ends and their stock returns drift to mediocrity.

People said that exact same argument three, five, ten years ago. What is happening is that the market for mobile and desktop ads and e-commerce is growing, combined with increased market share for these three companies, creating a double tailwind. I’m certain Google, Amazon and Facebook will not suffer the fates of Exxon, GE, PetroChina, Royal Dutch Shell, Citigroup, AT&T, Gazprom, BP, Toyota, Bank of America, China Mobile, HSBC, ICBC, and Walmart. Part of the reason Amazon, Google, and Facebook will be permanently successful and are so resilient is because they have market dominance, impassable moats, ubiquity, and are mostly immune to global macro conditions, whereas commodity and banking companies are much more vulnerable to macro conditions. It’s much easier to create a steel, drilling, or mining company (look at all the overnight fracking companies that went bust in 2015-2016) than it is to, say, get 1/6 of the world population on your social network (Facebook), every website and phone displaying your ads (Google), or every consumer buying from your store (Amazon) (and also the cloud hosting services).

A decade ago, few foresaw Amazon and Facebook being as big as they are now (in fact, so big and important that people are becoming concerned), yet it happened. Same for Tesla, Ali Baba, Netflix, and others.

30 years ago it seemed inevitable that someone eventually would come up with a competitor to Windows and or that Windows would cede to a competitor, but it never happened. Same for Google in 2002 “Someone else will build a better search engine,” or Apple in 2009 “The iPhone is a fad…Microsoft Zune is better,” or Facebook in 2008 “It’s the next Myspace…anyone can make a social network,” yet those three companies are stronger and more dominant than ever. The promise of competition and or obsolescence never came. GE, IBM, and PG&E, which are still going strong after 100 years, are examples of how companies can defy the survival odds.

Regarding Netflix, unlike in the 90’s, valuations for the median tech company is lower. What this means is although some companies (such as Netflix, Amazon, Tesla, and Snapchat) are very overvalued by conventional metrics, the median tech company is not. In the late 90’s, however, both on a mean and median basis, tech companies were obscenely overvalued. And unlike Tesla and Netflix, these companies had much weaker business models, more competition, and no ubiquity. This is related to the post-2008 trend of capital flowing into a smaller and smaller pool of companies, while shunning the rest, unlike in the 90’s when capital tended to flow into tech stocks indiscriminately.

The five strongest tech stocks make up 30% of the S&P 500, but have also posted among the biggest gains for the year, too: 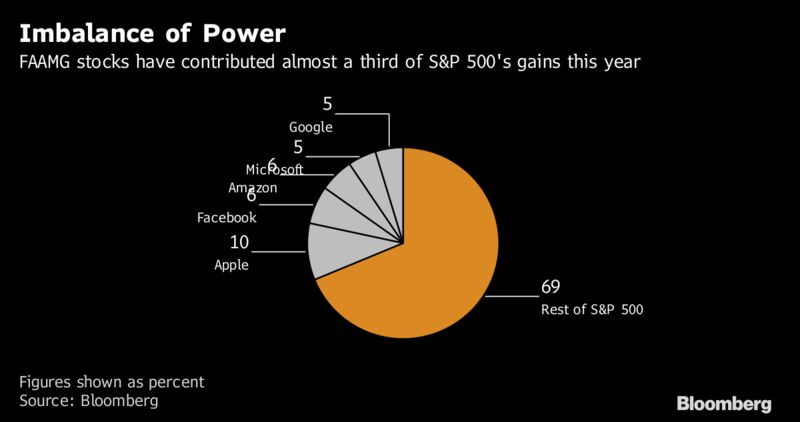 Those who say we’re in a tech bubble don’t understand this subtlety. A bubble is less likely when all the money is going into the strongest of businesses and sectors. Rather than there being a bubble, investors and funds are getting smarter (as an example of how capitalism has become smarter) by choosing in only the strongest businesses and ignoring the rest.