This paper presents a systematic review of published data on the performance of sub-Saharan Africans on Raven’s Progressive Matrices. The specific goals were to estimate the average level of performance, to study the Flynn Effect in African samples, and to examine the psychometric meaning of Raven’s test scores as measures of
general intelligence. Convergent validity of the Raven’s tests is found to be relatively poor, although reliability and predictive validity are comparable to western samples. Factor analyses indicate that the Raven’s tests are relatively weak indicators of general intelligence among Africans, and often measure additional factors, besides
general intelligence. The degree to which Raven’s scores of Africans reflect levels of general intelligence is unknown. Average IQ of Africans is approximately 80 when compared to US norms. Raven’s scores among African adults have shown secular increases over the years. It is concluded that the Flynn Effect has yet to take
hold in sub-Saharan Africa.

One of the most common arguments used by opponents of IQ testing is that IQ tests are culturally biased against blacks, who on average tend to score 15 points (a standard deviation) lower than whites. The above meta-study further refutes this misconception, and shows how Africans consistently score below European norms on the Raven’s Progressive Matrices [1], an IQ test specifically designed to have no cultural bias.

Average IQ on the SPM of people in the United States is approximately 2 points lower than the UK average (Lynn & Vanhanen, 2002; J. C. Raven et al., 1996). If we choose to compare the average SPM scores of Africans to an IQ of 100 for the United States, average SPM IQ of Africans would be 80. A Flynn Effect correction would lower these estimates by about one IQ point.

The authors, however, attribute such low scores (relative to European norms) to the absence of a ‘Flynn Effect’ in Africa, and that’s where I disagree.

Many of the variables that have been proposed as causes of the Flynn Effect (e.g., Barber, 2005; Ceci, 1991; Dickens & Flynn, 2001; Greenfield, 1998; Lynn, 1989; Schooler, 1998; Williams, 1998) have yet to undergo improvement in developing sub-Saharan African countries that they have enjoyed in the developed world over the last century. Because the environmental variables that potentially contribute to enhanced IQ have yet to improve in the countries of subSaharan Africa, we regard the Flynn Effect as still in its infancy. There is in fact a considerable empirical support that (mal)nutrition (Grantham-McGregor & Baker-Henningham, 2007; Sigman & Whaley, 1998), health (Williams, 1998), sanitation (Boivin et al., 1993), and schooling (Ceci, 1991) have an effect on IQ. The UN have included such variables in the so-called Millennium Goals, i.e., they are targeted for improvement by 2015 (United Nations, 2005). The formulation of the Millennium Goals provides an interesting opportunity to evaluate the effect of these factors on IQ levels in sub-Saharan Africa. There is now a clear indication that the Flynn Effect seems to have come to a halt in developed nations (Flynn, 2007). It is, therefore, reasonable to think that as circumstances in sub-Saharan Africa improve, the IQ gap between western samples and African samples will diminish.

But despite modernity, African Americans still lag whites on a wide variety of metrics (such as educational attainment, IQ, SAT scores, income, wealth, etc.), suggesting a biological component that cannot be easily ameliorated. African Americans have had every possible opportunity made available to them (at least compared to Africans), yet still score lower than whites. Steve Sailer has a post showing how high-income blacks score lower on the SAT than poor whites.

The obvious counterargument is that African Americans, genetically, are not the same as black Africans, so we cannot make such an inference.

Regarding the Flynn Effect, the authors try to pass off a hypothesis (that the Flynn Effect is due to nutrition, or that modernity implies higher intelligence) as fact. The truth is, no one knows why scores have risen…there are a bunch of theories, but no answers, or even if the Flynn Effect is proof people are becoming smarter. The authors are hinging their hopes on ‘magical’ powers of nutrition to close the gap, but the evidence shows that although children from disadvantaged backgrounds do more poorly academically and have higher rates of attention deficit disorder, their IQs are not much lower. Thus, better nutrition may mean higher achievement, but not a higher IQ. Also the low intelligence among groups self-selected for intelligence and higher SES (such as South African engineering students (Rushton et al. (2002))), further casts doubt that modernity can close the gap. And furthermore, much of Africa is modern in so far that it resembles a typical urban setting, contrary to common belief that all Africans live in primitive dwellings. For example, Windhoek, the Capital Of Namibia: 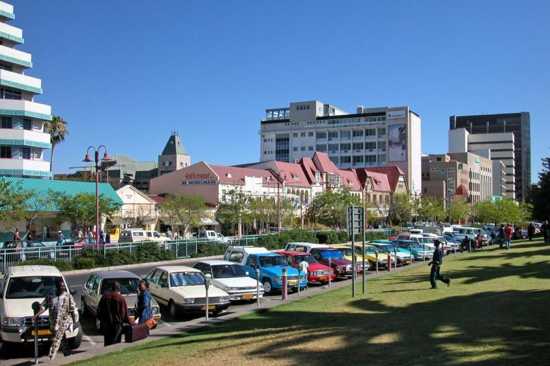