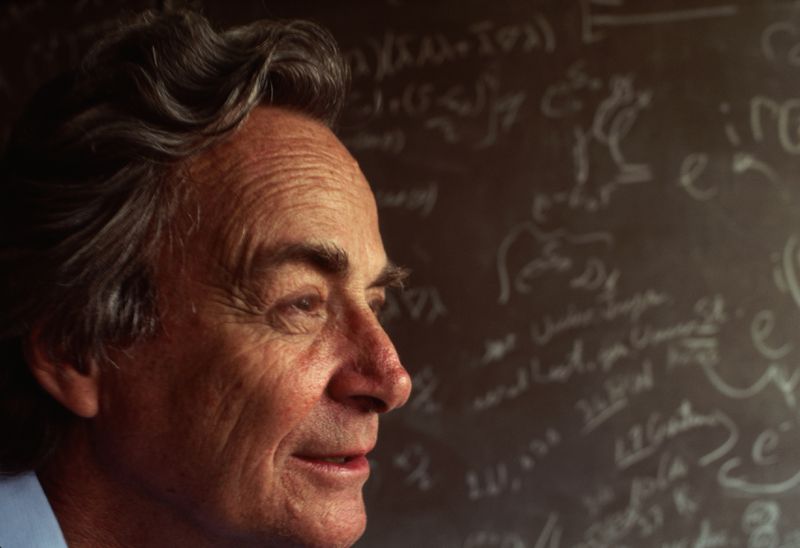 Richard Feynman, Nobel Prize-winning physicist, is among many high achievers whose measured IQ was not as high as you’d expect. Kevin Fleming / Contributor, Source: Vox

Richard Feynman is regarded as one of the most brilliant physicists who ever lived. That’s why it came as a surprise (to me at least) that his two books Surely You’re Joking, Mr. Feynman! and What Do You Care What Other People Think? are, first, not actually contiguous books (but rather are collected anthologies), and second, were not written by Dr. Feynman himself, but by a ghostwriter. Wouldn’t someone as ‘smart’ as Feynman be able to write his own books; how hard could that be; surely, it couldn’t be harder than QED or general relativity?

But it’s not just Feynman. In a recent podcast with James Altucher, Gary Vaynerchuk, an entrepreneur who grew his $3 million-dollar family wine business into $60 million-dollar in sales and launched an advertising company that grosses of millions of dollar a year, describes using ghostwrites for his four New York Times bestsellers, and in his own words, is “unable to write three coherent sentences”. Many people, despite the outward appearance of great intellect and competence, find it difficult to articulate their thoughts into written form. Why is that?

Writing requires a high degree of articulation and precision. It’s not just enough to have a thought, but one must also convey it coherently and cogently in written-form, which requires grammar, organization, and a certain degree of stylistic ascetics. The job is to create ‘order’ from the disorder of the universe and one’s own mind. It’s like a giant jigsaw puzzle where one knows what the finished product looks like, but one must laboriously assemble the pieces exactly to obtain it. Furthermore, the thought must be conveyed in manner that appeals to other people, and this requires at least a basic grasp of human psychology and is what makes writing challenging. A typical column in the New Yorker goes through multiple revisions and editors just to make it ‘read’ the way it does. If they could cut their headcount without sacrificing style, they would.

That’s why, despite my personal ‘affinity’ for STEM, I don’t look down upon the liberal arts; that stuff when done at a high caliber is fucking HARD. Jordan Peterson has a video where he extols the value of artists to society. Try writing a viral article that ‘resonates’ with everyone; I’ll take the equations any day over trying to doing that. This is especially true for creative writing, which seems deceptively easy because of the world ‘creative’, but is harder than non-fiction, because of the importance of style but also how the unconstrained format means that author so much choice that it can be overwhelming; it’s almost easier to be told what and how to write (such as for assignment) than to be given so much freedom. And there is also a degree of randomness, too, and the difference between a ‘good’ and an ‘awe-inspiring’ piece of writing often hinges on the arrangement of some sentences, the use of metaphor, or choice of words, even if the content or theme is more or less the same.

As a personal anecdote, the hardest class I ever took in college was not math, but rather an English composition course, because the exactness what not what I used used to. It took me an entire weekend, nonstop, to re-write an essay in the way the teacher wanted to get a “B+”. But I’ve made good money investing in Bitcoin and stocks [and people who have taken my investing advise have also made money], and I’ve derived many mathematical formula on my own, but success at writing (in terms of writing a ‘really great’ article) [is hard. And from the post Verbal…Harder than Math? Part 2, it seems to be ‘easier’ for people with literary aptitude to make the transition to math, than the other way around. Even from personal experience, the smartest people, growing up, in elementary school, were those who excelled at writing. It’s just weird how that works.

So are writers the smartest people alive? I dunno, but if successful writers are able to accomplish things that even people we take for granted as ‘smart’ find difficult to do, then maybe they are smarter than we give them credit for.