Regarding the proposed Trump tax cuts, will they cause inflation, as everyone is predicting, or not? As I wrote many months ago, Peter Schiff Wrong as Always: How the Trump Tax Cuts may actually be Deflationary, I stand by my prediction that the Trump tax cuts, if implemented, will cause no meaningful inflation (as measured by CPI and other indicators) and may even be deflationary.

In our era of asset-based capitalism–where everything from tech stocks, to high-end real estate, to Bitcoin keeps going up to no end–one of the reason why this fiscal liquidity has not created inflation is because the money is being invested rather than spent on economic activity such as entrepreneurship, labor, infrastructure, and consumer spending.

From Daily Reckoning, Can Money Printing Cause Deflation?:

I am aware that this is a very simplistic view, but my point is that all the liquidity that central banks have created isn’t flowing into the real economy but remains in asset markets (mostly financial markets) buying and selling currencies, bonds, stocks, real estate, art, entire companies, etc. For example, most corporations find it more advantageous to buy back their own shares (in order to boost their share prices) instead of investing in new plant and equipment. (In 2014, S&P 500 companies will spend almost 60% of their profit on share buybacks.)

Or take wealthy individuals as another example. Most of them invest in stocks, bonds, funds or real estate; very few of them go out and build businesses. Private equity funds do the same: instead of building new businesses, they tend to buy existing assets.

In fact, I would argue that central banks’ monetary policies have been too successful at boosting asset markets; because of this, they have been a complete failure at maximising the level of national income for the majority of people and at providing sustainable economic growth that would raise the standard of living of the majority of participants in the economy. Furthermore, the current global macroeconomic conditions remind me of the high-tech, media and telecommunication boom of the late 1990s, which ended in March 2000. As long as tech stocks moved up, investors showed very little or no interest in investing in old-economy companies, real estate and commodities.

But this passage also showcases one major misconceptions about monetary policy: QE (Quantitative Easing) 2 &3 were primarily designed to manipulate the long-end yield curve of treasury bonds; it is NOT literally money printing. People keep getting this wrong, and this distinction explains why QE has not created inflation and has not boosted the M2 money supply. In QE 2 & 3, by buying long-term bonds, this lowers their yields and makes bonds less attractive, in theory creating an incentive for people to take on more risk, thus boosting the economy, instead of seeking the safety of buying treasury bonds. The fed does not print money; the treasury does, which is authorized by Congress. This is explained in more detail here: Does the Money Supply Increase When the Fed Buys Bonds? When the fed buys mortgage backed securities or treasury bonds from banks, it replaces those with reserves, which are not lent out.

So now Trump is proposing a $2.4 trillion tax cut (by comparison, the Bush Tax cuts cost $1.5 trillion over a decade).

As stated before, the tax cuts will not create inflation and may even be deflationary, for the following reasons:

1. Due to ‘assets’ being favored over entrepreneurship and consumer spending, the tax cuts will be invested and saved, effective acting as another QE program.

2. Some of the money will be used to pay down existing consumer debts, hence acting as deleveraging.

3. Some of money will be saved in banks, effectively acting as an interest rate hike.

4. The perception of the tax cuts being inflationary will boost both treasury bonds yields and the US dollar, the latter lowering import costs and narrowing the trade deficit, hence lowering CPI inflation.

5. The tax cuts can’t be both useless and inflationary. If the tax cuts fail to spur economic growth (which seems to be the consensus among many economists and pundits), then it cannot also create inflation.

Despite predictions of hyperinflation, neither the Bush tax cuts nor the Obama stimulus (and other spending) meaningfully boosted the CPI: 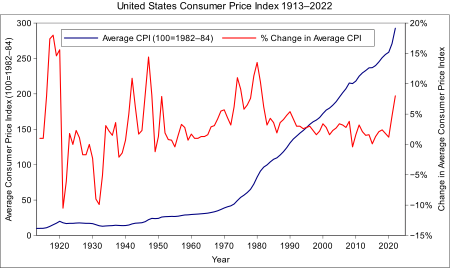 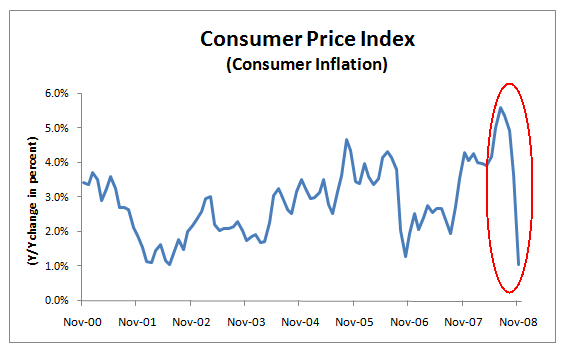 Had someone in 2002 or 2008 bet against treasury bonds in anticipation of high inflation due to spending, they would have lost a lot of money.

Another misconception is that interest rates must rise to pay for the tax cuts, from CNBC GOP tax plan could trigger a domino effect that sends interest rates shooting higher

A common criticism of the details released Wednesday is that they don’t include any offsetting revenue or state the impact the plan will have on the government budget deficit or debt level, currently at $20.2 trillion. Bove figures the $587 billion deficit will increase considerably under the GOP proposal.

“In order to get the tax rates reduced, interest rates have to go up because the potential buyers of the debt are going to demand more in order to take on that debt,” Bove said in a phone interview. “Or, they’re going to say they don’t want it, which is really going to drive rates higher.”

What’s more, the Federal Reserve is already on a rate-hiking course, with the market expecting another quarter-point increase in December. Should the central bank continue on its professed path of regular increases, as well as the unwinding of its $4.5 trillion balance sheet that includes nearly $2.5 trillion of Treasurys, that would compound the yield pressure.

Tax cuts (or any form of government spending) are not funded by raising interest rates. They are funded by the Treasury auctioning treasury bills and notes, which are longer duration than the federal funds rate. The fed raises and lowers the interest rate to control inflation and mediate economic growth, but beyond that their powers are much more limited. If debt buyers feel they are not being fairly compensated for inflation risk, they will demand higher yields at auction, causing bonds prices to fall. Second, if the Trump tax cuts fail to create their promised economic growth, the fed should have no reason to raise interest rates beyond their projection, despite increased spending. Because the US has the highest possible high credit rating and reserve currency status, it can demand very low yields on its debt at auction, relative to, for example, C-grade corporate debt (which commands 6-8% on 10-year debt, instead of 2.5% for 10-year treasury bonds).

This is also wrong:

A key provision of the reform plan calls for the repatriation of cash that multinational companies are holding overseas. While details remain thin, foreign holdings will get softer tax treatment when they are brought home. Companies have about $2.5 trillion stashed abroad.

Treasurys fit into the equation because much of that overseas money is held in cash, cash equivalents or short-term investments — a category that includes government debt.

So, when companies start pulling that money back to the U.S., that presumably would mean selling of Treasurys, a move that would push up yields. Buyers will be needed for those bonds as government debt and deficits increase, which also could see a demand for higher rates.

Repatriation simply means transferring existing assets from a foreign bank to an American one. It has nothing to do with the sale of securities. And also, the treasury market is $14 trillion, which is vastly larger than overseas corporate holdings.

As further example of this blog being right, CNBC just published an article titled The Trump tax plan won’t pay for itself. Here’s why it doesn’t matter, which is similar to an article I wrote in 2015 Do Tax Cuts Pay For Themselves? It May Not Matter:

*No one should believe for a second that any Republican, Democrat, or Trump administration official cares much about debt. What they should believe is that Americans can do better things with their own money and do it more responsibly and effectively than Washington ever could.*

I agree. Even if the tax cuts don’t pay for themselves, due to the insatiable demand for bonds and America’s reserve currency status (but also the fairness and moral rectitude of letting people keep more of what they earn and spend how they see fit, instead of having Washington spend the money on more bloated programs), the money is effectively free anyway, which is why I support the tax cuts.