Greg Johnson and others on the alt-right talk about the need or inevitability of ‘white identity’, but is white identity viable, or just wishful thinking? I want white identity to work, but I’m not so optimistic for the following reasons:

1. Who is white? Seems obvious enough, right…people who look white. But it’s not that simple, because not all people with white skin are considered ‘truly’ white. For example, many Jews look white (unlike that common caricature you see on the internet, most Ashkenazi Jews don’t look like that), so are Jews white if they look ‘white enough’? [1] The election of JFK was a big deal because in America, at the time, Catholics weren’t considered ‘fully white’. Only WASPs were ‘white’, and ethnic groups such as the Irish, Scottish, and Italians were considered to be a sort of ‘inferior version’ of whiteness, or a sub-race above the negro but below the Anglo-Saxon Protestant: 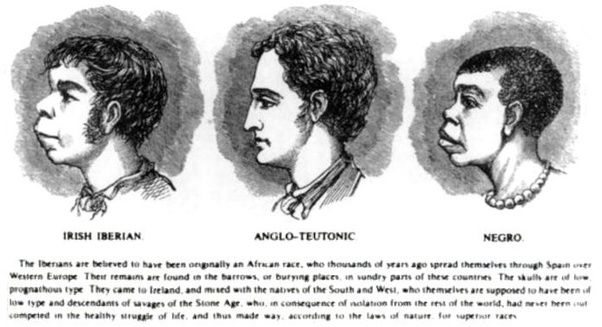 The election of Kennedy and other factors upended those notions, and Catholics, Irish, Scotts, Italians, and Greeks are considered white. But how about the Slavic peoples of Eastern Europe and Russia? And what about people who are half Jewish or half Slavic, quarter Asian, or even fractionally African, etc. As you can see, defining whiteness is difficult and goes beyond just superficial skin color.

2. Race secondary to culture and ethnicity. A couple days ago, this story went viral Black Student Group Complains Ivy League School Is Letting In Too Many African Students:

Black Students United takes issue with the fact that there are more African and Caribbean students on campus when compared to black students. The group defines black students as those who come from black families that have lived in America for two or more generations. While the group said it doesn’t mind the university trying to recruit African students, they want the college to pay more attention to black students whose families have been affected by years of white supremacy.

“The Black student population at Cornell disproportionately represents international or first-generation African or Caribbean students. While these students have a right to flourish at Cornell, there is a lack of investment in Black students whose families were affected directly by the African Holocaust in America. Cornell must work to actively support students whose families have been impacted for generations by white supremacy and American fascism,” the group wrote.

So for Black Students United, ‘blackness’ is not just about skin color but about a shared cultural experience of ‘oppression’. The absence of this cultural experience makes Black African immigrants outsiders, despite being black. This shows how identity is as much cultural as it is racial, and is one of the reasons why ‘white identity’ does not work. Besides skin color and religion, culturally conservative whites in the South have little in common with liberal whites up North. Second and third generation Irish, Scottish, and Italian Catholics in California and New York, culturally, have little in common culturally with white Southerners.

3. No unifying cause or struggle. Whites in America don’t really have a ‘unifying cause’, unlike African Americans that can unite against the legacy of slavery and Jim Crow. The Northern Irish Catholics can unite against the English Protestants; for example, The Troubles, an ethno-nationalist conflict in Northern Ireland between English Protestants and Irish Catholics during the late 20th century. But White American Protestants in the South have no ‘unifying cause’ with white Catholics up North and in California. But even among American white Catholics and white Protestants, there is no unifying struggle that unites them.

4. Too many whites. Although they are united by Christianity and color, that is not enough to create a movement, because there are too many of them and individual cultural factors begin supersede race, whereas there are only 3-6 million Ashkenazi Jews in America, which could explain why American Jewish identify is stronger than white American Catholic identity or white American Protestant identity.

5. Biological and cultural factors unique to whites. Due to cultural and biological factors, Christian whites may to be less gregarious than blacks and Jews, but this is just a hunch. The Protestant work ethic is party to blame for the culture of individualism and self-sufficiency among whites.

6. Too much infighting, although this is not unique to white identity movements. Identity movements tend to be absolutist, meaning that any defect from idealized ‘purity’ is not tolerated. Members who are deemed impure may be ejected and is why the biggest threat to identity movements are not outsiders but rather rejected members who seek retribution. But some members that are in otherwise good standing may take matters into their own hands by overthrowing what they perceive to be an impure leadership, sometimes with deadly force. But also, big egos are also liable to clash. For example, George Lincoln Rockwell and Malcolm X were killed within two years of each other, both by disgruntled members of their respective organizations.

[1] Based on physical appearance alone, for all intents and purposes, Jonah Goldberg and Eugene Volokh are white and don’t at all resemble the stereotypical Jewish caricature.