In the past month, there have been a plethora of doom and gloom articles about web 2.0, Silicon Valley, the economy, and start-ups. In this series, I address some of the major concerns, arguing that perhaps the negativity is not all warranted.

Everyone has been predicting tech bust 2.0 since 2009, and they keep being wrong. The post-2008 tech boom – which includes web 2.0, Facebook, Google, Uber, Amazon, and Silicon Valley – is more permanent than cyclical or transitory. Like the Bitcoin boom, it has also defied all predictions of it demise. It’s not like 2000 or 1929 where the is going to be a deafening implosion. Instead, the exiting trends that are established, such as valuations going up, will continue. The arguments for tech bubble 2.0 are less convincing than the arguments for a continuation of the boom.

Fred Wilson, in his predictions for 2016 writes:

Markdown mania will hit the venture capital sector as VC firms follow Fidelity’s lead and start aggressively taking down the valuations in their portfolios. Crunchbase will start capturing this valuation data and will become a de-facto “yahoo finance” for the startup sector. Employees will realize their options are underwater and will start leaving tech startups in droves.

As a VC expert, I’m surprised Fred doesn’t realize these markdowns are strategic (possibly tax related), not because of reduced investor demand. There is zero evidence of Snapchat shares changing hands at reduced valuations.

Crunchbase will start capturing this valuation data and will become a de-facto “yahoo finance” for the startup sector. Employees will realize their options are underwater and will start leaving tech startups in droves.

Fred is being sensationalist here. I don’t see any of that happening, except for the deterioration low-quality ‘unicorns’ like Jawbone, GoPro, and Fitbit.

A someone who has followed financial markets for years and written thousands of words and hundreds of essay on the matter, I’m pretty good at being right, at separating doom and gloom hype from reality

In an earlier article about Theranos, I give examples of how the media predicting failure:

Whether it’s Tesla, Uber, Theranos, or or any other successful start-up, the left are like bloodhounds drawn to the scent of failure of the successful, even when such failure does not actually exist. The liberal media is so desperate for the successful to fail that they have to make stuff up, turning molehills into mountains.

There are many more…

In 2005-07, the leftist media dismissed Facebook as a fad like Myspace. After being wrong there, then, in 2012, the left said Facebook was doomed because the stock fell after the IPO, and that Facebook would not be able to monetize mobile users. The stock is up 300% since then, and mobile advertising growth is crushing expectations: In 2011, the liberal media sensationalized a story about an AirBNB renter vandalizing an apparent. What was overlooked or ignored in the anti-AirBNB sensationalism is that the vast majority of rentals are without incident.

The event happened, which is a terrible blow to the company’s reputation. The confusion seems to be around whether or not Airbnb will compensate her for her losses. The company at first said no, then said yes, and clarified that they made the offer last month when it happened, not in response to the PR storm yesterday.

Terrible blow? lol more like a hiccup. The valuation of AirBNB has since surged 500%. So has growth.

The problem is there is no accountability. Pundits can just shoot their mouths off, making unsubstantiated comments that are later proven wrong and no one calls them out on it.

Google has some obvious weaknesses. Its ad revenue per page has been declining for years because the internet is now coated in ads, and very few people on the internet actually buy anything. This has caused sites to become clickbait in order to draw in enough traffic to get a decent income from the lower-paying ads they now run; this in turn causes a concentration of traffic on relatively few sites. That puts us right back in the place where we were with old media where six big companies ran the show, and this has decreased the value of the internet as a news source.

Google has been unstoppable since launching its ad platform in early 2000, with a monopoly contextual ads and duopoly in mobile advertising (shared with Facebook). Cost per click keeps rising, and it seems like virtually all commercial websites have Google ads. As for ad blindness, what a lot of skeptics don’t understand is that adverting is most effective for 60% or so percent of the general population who have IQs between 80-110 and will keep clicking ads, which is a lot of people and a lot of clicks.

Second, there are two people who buy ads: small buyers who are looking for a quantifiable ROI (sales, leads), and large buyers that are looking for ‘mind share‘, where the ROI is harder to quantify. An example or the former is someone selling an ebook report or collecting emails, and the latter is, for example, a movie studio buying ads to promote a Summer blockbuster. The studio doesn’t care if visitors buy anything or not (the movie trailer doesn’t have any way to buy anything); they just want to blast their movie promo everywhere, and will pay a lot to do so. Same for those expensive car ads you see everywhere. Ford doesn’t expect anymore upon seeing their ad to immediately rush out and buy a truck, but instead to merely consider Ford as an option when shopping for a new automobile.

Right now, as of February 9th 2016, Snapchat announced a deal with Viacom – a very deep-pocket advertiser looking to spread ‘mind share’. Now we can see how Snpachat will live up to its $15+ billion dollar valuation, which I predict will rise as high as $30-60 billion within the next year or two.

Facebook wallows in weakness as well. It has tons of users because people can access it from at phones or on the job. The problem is that these people, beyond a few product categories, do not represent consumers. They are there to screw around. As a result, while Facebook and other social media have many users, they do not have many buyers. It’s not even clear that ads on these sites attract eyes from people who want to buy the products, which is why the ads are getting more random and more frequent, becoming a genteel form of spam. Twitter suffers the same problem.

Hardly, as I show above regarding Facebook’s huge growth in advertising revenues. Facebook, unlike the doomed Myspace, appeals to an older demographic who have more purchasing power than teens. But even sites such as Snapchat and Instagram, that appeal to younger demographics, are not having trouble finding advertisers, who are willing to spend millions of dollars promoting clothes and other products to this large demographic (mind share). As part of the boom in mobile and video advertising, Instagram revenue is projected to surge: Also, as I explain above, a lot of online advertising is to build ‘mind share’, with the intent of merely nudging people to consider a brand, not to actually make an immediate purchase.

And from the WSJ: Tech Startups Face Fresh Pressure on Valuations 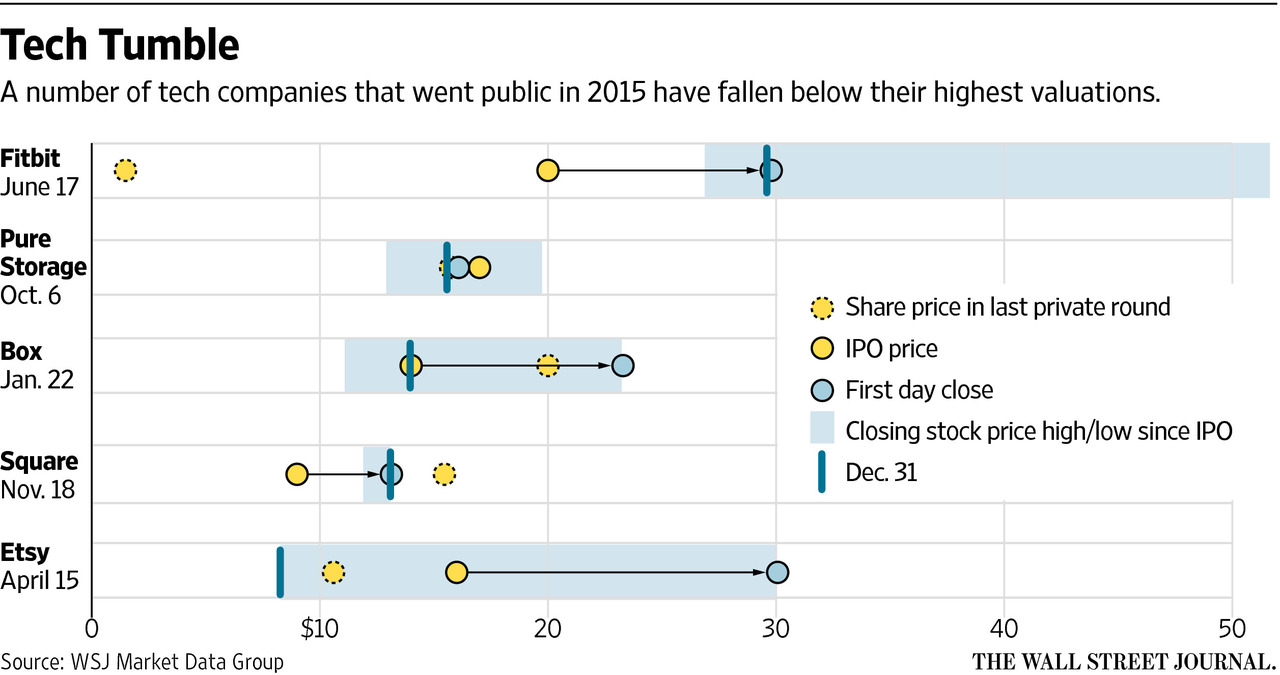 The one for Square is off only 20% from the private round vs. the Dec. 31st close. It hasn’t moved that much, and it’s too soon to assume it’s under pressure. Most of the valuations gains were made in the years leading up to the IPO, as companies are going public later and later. That could explain why some of the post-IPO gains seem stunted.

The author mentions the worst companies that even I, web 2.0 bull, would never invest in. He mentions box.net but ignores dropbox. No mention of Air BNB, Uber, Snapchat, Slack. Although these aren’t public, there is an investor bias against hardware, but such a bias is warranted given the storied history of once high-flying hardware companies eventually soaking investors due to profit margin compression, competition, or becoming fads or obsoleted, examples being Sony, Atari, Garmin, Nintendo, Sega, Fitbit, Nokia, Motorola, Gopro, Jawbone, Skull Candy, Research in Motion, and many more.

Yeah, there is valuation pressure, but for companies that aren’t very good. This is evidence investors are becoming smarter and more selective, whereas in the 90’s a company like Fitbit would have had a PE ratio of 500 instead of 50, which is what it is right now.

Some more shoddy reporting for the from the WSJ: As Angel Investors Pull Back, Valuations Take a Hit

On AngelList, a crowdfunding site aimed at such investors, the average valuation for a company receiving funding reached $4.9 million for two quarters last year, its highest level in five years. But valuations dropped to $4.2 million in the fourth quarter, the lowest level since early 2012. Dow Jones VentureSource data shows that deals involving angel investors fell by 16% last year.

It seems like a big deal until you realize there is a huge variance in prices and that 2012 isn’t very long ago. The biggest and most successful ones such as Snapchat, Uber, Air BNB, Dropbox, and Pinterest seem to be doing just fine.

It’s easy to separate the potential winners from the losers. As mentioned before, start-ups that deal with hardware and other physical stuff tend to fare much worse than apps, websites, and software. For example, Fitbit, Skullcandy, Jawbone, and Gopro have all performed poorly. Now jawbone got the axe, raising money at half its 2014 valuation. Had VCs heeded my simple strategy of avoiding hardware, a lot of pain could have been avoided. Hardware is just too difficult to get off the ground. Costs are too high, and tangible products are vulnerable to becoming fads of commoditized.

From the New York Times: Expect Some Unicorns to Lose Their Horns, and It Won’t Be Pretty

Haven’t we been ‘expecting’ this since 2012, yet the biggest, most successful unicorns keep going up in value.

For all the hype and doom about Square stock, the price is back to where it was when it began trading a month ago, although it has fallen 20% in recent weeks.

But this is a good opportunity for employees to understand the risks of stock options, but it’s not like the world is coming to an end. Such risks have always existed.

My prediction is by the end of 2016, we’re still going be seeing record high valuations for the top unicorns.