Interesting article from the Anti-Democracy activist, although I disagree with some of it.

The ‘mall’ sucks. Amazon is putting them out of business, and good riddance. The ‘mall’, any mall, is sideshow of the dregs of humanity. At least Walmart and Amazon are cheap and convenient, versus spending hours strolling through a mall as you force yourself to not make eye-contact with the glassy-eyed double-digit IQ zombies bearing 2-liter sodas and strollers of obese babies in tow. The ‘mall’ has probably always been awful, and I can’t imagine there was ever a ‘golden era’ for malls, as Anti-Dem suggests. Just because I’m a capitalist doesn’t mean I like all aspects of it.

People had more pride in themselves back then: the morbidly obese, the garishly tattooed, the grown men dressed like adolescent boys in falling-down pants or in t-shirts with obscene slogans on them – these were all still rare and freakish. Some of the hairstyles may seem silly now, but even those took an amount of time and effort to pull off that showed us for a people who still took care of ourselves.

These 1989 mall photographs paint a depressing picture. The shoppers look like immigrants and refugees, with unruly hair and dark, ill-fitting clothes. Obesity is undesirable, but crime is even worse, and the 80’s, to quote Coolio, were a gangster’s paradise as crime flourished, abetted by a combination of America’s newfound economic prosperity (more income means people buy more stuff, which helps burglars and drug dealers) and lax law enforcement, both of which made organised and petty crime lucrative. The same for Germany, which following the second world war had become emasculated, allowing Arab terrorists to hijack airplanes (a favorite was Lufthansa) and have their ransoms acceded, often with impunity. The mob had reign over New York, until finally being shut down in 90’s with the arrests of Gotti and James Burke. It wasn’t until the mid-90’s and 2000’s, with tougher sentencing (especially for repeat offenders), the war on drugs, computerized databases and the modernization of law enforcement, did the 70’s and 80’s ‘crime boom’ end.

Violent crimes peaked in 1989 (the same year those mall photographs were taken) and has steadily fallen since: Similar trends are observed in America for property crimes:

The 70’s were even worse. Everything was overpriced, with long gas lines, high inflation, awful TV dinners, hand-me-downs, and grainy televisions with few channels. The 80’s were an improvement, but it wasn’t until the late 90’s did the economy become ‘modern’, as it remains.

In another article, the Anti-Democracy writes:

The face of modern leftism is upper-middle-class white women with Master’s degrees in economically useless fields complaining about the content of video games, while what used to be the native-born working class sinks deeper into poverty, hopelessness, purposelessness, welfare dependency, oxycontin and/or methamphetamine abuse, and self-destructive sexual irresponsibility.

He’s ignoring the tremendous explosion of wealth since the 80’s, such as household net worth: 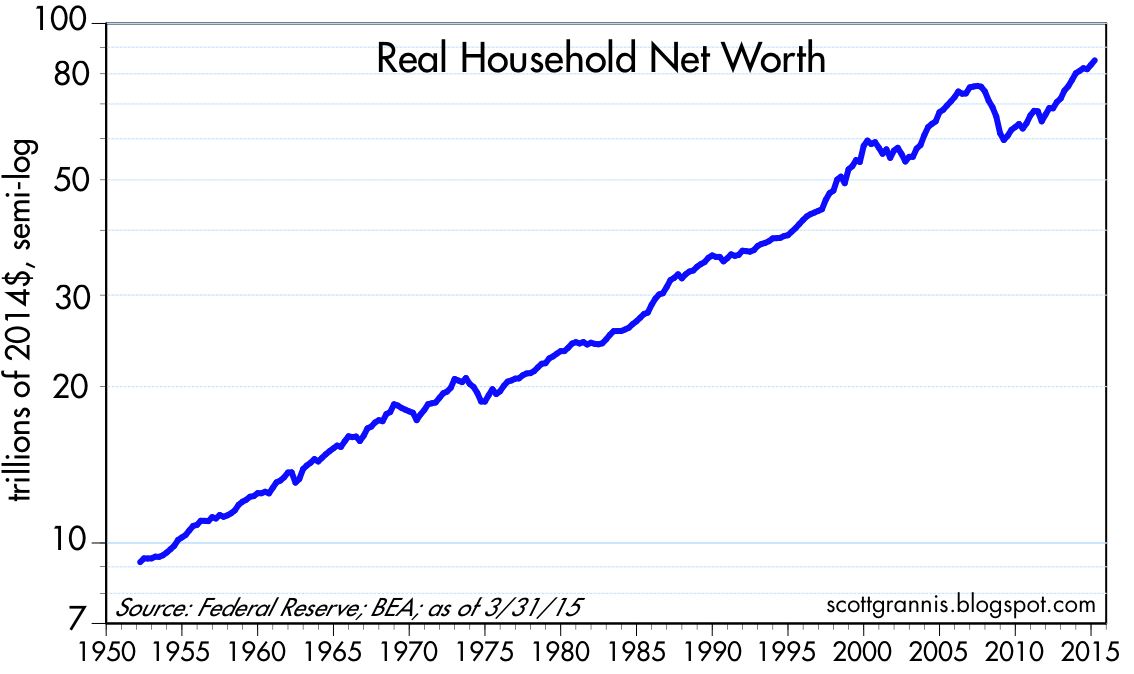 A worker in the 50’s would have had to save for months to buy a television, whereas today a middle-income worker can get a quality flat panel, with just a weeks’ worth of earnings. While real wages may have stagnated, purchasing power as measured by utility has surged. Food has become so cheap and abundant, there is an obscenity crisis in America among the ‘poor’.

According to this price guide, a typical TV set cost $500 between 1950-1960. Average hourly wages were about $2/hour, give or take. Thus, you had to work 250 hours to buy a TV. A high-quality TV set today still costs about $500, but median hourly wages are $25, so you have to work much less to buy it, and the TV is obviously of a much better quality. Even if real wages are stagnant, utility is always improving, which is really what matters.

As for employees being exploited, while real wages may be stagnant or falling, benefits have surged:

The labor force has been shrinking for decades, yet GDP and other economic data is at record highs, indicating that we may be moving to a society of less work and more leisure, where the workers that remain become more productive. Republicans, not the liberals, support this, knowing that people should work to create economic value, not work for the sake of working.

As hard as this may be to remember, leftism was actually founded in order to protect farmers and factory workers from bourgeois, decadent, effete, overeducated, libertine urbanized elites. That’s why its symbol was a workman’s hammer and a farmer’s sickle.

No, AntiDem is revising and mollifying – ‎Marxism–Leninism, which is about the proletariat owning the means of production, often through violent revolution if necessary, to something ennobling. It means private property is forcibly taken from those who built it and redistributed, if by ‘protecting’ workers.

Say what you will about the Classical Marxists of the past – Lenin, Stalin, Mao – but they built massive hydroelectric dams, intercontinental missiles, skyscrapers, and atom bombs. Yet in The Current Year, they and their grand projects have been replaced by the Cultural Marxism of Gramsci, Marcuse, and Alinsky.

As for ‘dams’, he is probably referring to the Three Gorges Dam in China, but, as it turns out, Mao didn’t begin the project – its was Chiang Kai-shek who began the work. Shek, a Nationalist, was unable to maintain good relations with the Communists. After the 1949 Communist takeover, Mao Zedong supported the project, but began the Gezhouba Dam project nearby first, and economic problems including the Great Leap Forward and the Cultural Revolution slowed progress. It wasn’t until the 80’s, after Mao and his revolution died, did planing and construction begin.

Joseph Stalin initiated a nuclear program in the 40’s, but was unsuccessful in developing a working atomic bomb before America. Some historians don’t really consider Stalin to be Marxist but more of a fascist who deviated from Lennin’s ‘vision’. Maybe Stalin was one of the ‘better’ Communists, but that’s like choosing between Salmonella and E coli.

The future is ‘small’ – smartphones, apps, biotechnology, contextual advertising, nanotechnology, payment processing – stuff like that, not big, unwieldy stuff. Big projects cost too much money and, in many instances, are not needed. Many skyscrapers have high vacancy rates. Same for malls. As evidence of this trend towards miniaturization, shipping, mining, drilling, and oil rig stocks have been among the worst performers since 2009, with information technology, payment processing, banking, and biotech being among the best.