As shown below, while jobs are being created, many of them are in the low paid service sector, but this doesn’t include ‘gigs’ on TaskRabbit or Craigslist, which typically pay even worse. Many people with college degrees hold jobs that a generation ago would have gone to high school dropouts. But those without a degree are even worse off, finding it harder than ever to get even a low paid service job. 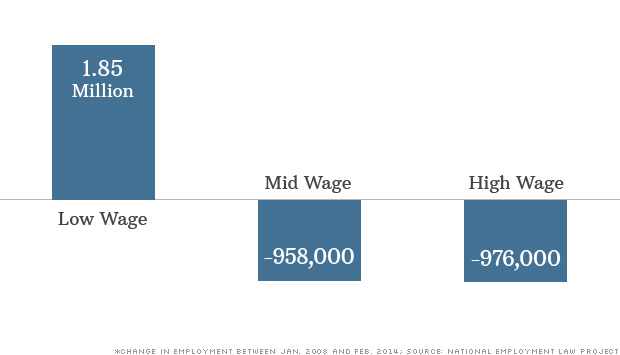 Companies are automating and outsourcing everything else, as shown by the table of jobs that have been outsourced: Jobs are being added overseas and cut at home:

Many millenials are majoring in subjects that are of dubious value. Employers have little use for African American gender studies, although the completion of the degree, however worthless in the real world, could signal some degree of literacy. Possible solutions to credentialism are proposed here.

This is the most competitive and cutthroat labor environment ever. Although the unemployed to job openings ratio has fallen, it doesn’t take into account the vast number of long-term unemployed people that aren’t counted. Due to automation, outsourcing, and the swelling U.S. population, the supply of workers still vastly exceeds demand, a trend that will continue because there is no obvious impediment or reason why it won’t. For example, during a recent McDonald’s hiring day, only 5% of 1 million applicants got a job – a lower acceptance rate than Harvard. A labor force participation of less than 60% means there’s still a ton of people looking for work, even if they are no longer counted in the official unemployment rolls. In the early 80’s it was much easier for average Americans to find work; now not so much. Due to all the competition, you have to be way above average to fill the most mundane of positions. From The World As It Is: Post-2008 Economic Reality Part 2, despite record profits and earnings, employers are still in 2008-style cost cutting mode. To get hired means you have to be overqualified. To get a job as a Starbucks barista, you have to be a really good barista. This is good for the consumer in terms of better service and quality, and good for the employer because he has more leverage over the employee, but makes it hard to get a job. On-site job training is also becoming a thing of the past because the supply of labor is so great, companies can choose from a large pool of experienced applicants.