Our opinions or narratives are formed by an amalgamation of facts and personal biases. For the left, such a narrative is that the economy is weak due to record wealth inequality, the debt being too high, low labor force participation, or alleged fed tapering and therefore the stock market should be lower. To quote Shakespeare, think of these liberals as a serpent’s egg. Our narrative is that we’re still in an economic boom, a Goldilocks economy, and that the market is going much higher with no foreseeable top. Five years form now the dow could be at 25,000 and the left will still be waiting for ‘full employment’ , for the debt binge to stop, for the wealth inequality to stop widening, for student loan bubble to burst, for profit margins to collapse – all to no avail – the poor, stupid, crisis-seeking losers that they are. This is a blog for for winners, or at the very least, those who acknowledge economic reality instead of the make-believe narratives and incantations of wishful thinking conjured by the Cassandras of the leftist blogosphere. You come to this blog for the unvarnished truth and that is what you will get, without fail.

People are eager to blame the economy, the rich, the government and the fed for their unfortunate circumstances. According to Napoleon Hill’s Think and Grow Rich, the difference between those who can live a fully functional life of abundance and those who don’t are the people who have a burning desire. People have the desire, but don’t have the determination or willingness. There have been periods of time when unemployment is high and inflation is crazy, but there’s never been a moment when there hasn’t been opportunity in America.

It’s bad to have an incorrect economic narrative; it’s suicidal to have money at stake in addition to an incorrect narrative and a confirmation bias. A confirmation bias keeps your head in the clouds in the wake of contravening evidence. If you want economic failure you will only see the data that confirms this and you will subconsciously ignore the data that disagrees. A trader that goes by the pseudonym The Fly writes

All of the earnings coming out are dreck. The liquidity that once drove stocks higher, provided by the Fed, is gone. The economy, once led up by a recovery in housing, is now on the decline. I ask myself “other than the fact that stocks have gone lower and are seemingly on sale, why should I be long?” It’s a question I should’ve asked myself about a month ago. However, sometimes it’s better to be late than never at all.

Stocks suck, especially the one’s with big growth rates. They’re not growing fast enough because the economy is rotten. The only companies that seem to be doing well are basic necessities: beer, toilet paper and cheap clothes. Other than that, it’s casino time, all day, every day.

Bounce or no bounce, I’ve seen enough of this cancer. We’re going much lower from current levels. The growth stocks are only the beginning and serve as the proverbial “canaries in the coal mine.”

Anyone that bets against the market based on the nonsense in the aforementioned passage will be squashed like, um, a fly. America is not Rome burning as Nero fiddles. The only thing burning is the trading account of anyone foolish enough to short the market. There is no canary in the coal mine. Earnings are great. Over the past four years, 73 percent of companies have beaten earnings estimates for about 20 consecutive quarters. This most recent quarter is no different. Facebook, Google and Apple reported blowout earnings, yet again. A month ago the fed came out and repudiated any further tightening. They did as 180 and promised not to do anymore.

Interest rates are never going up again. Richard Fisher, president of the Federal Reserve Bank of Dallas, said he thinks interest rates will remain very low for some time even as the central bank continues its current rate of tapering of its stimulus program. The Federal Reserve began trimming its stimulus this year by $10 billion a month to its current bond-buying pace of $45 billion a month. The fed is hardly ‘gone’. Housing never lead the recovery, sorry lib. 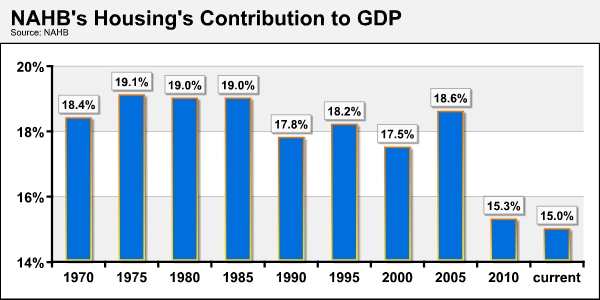 Despite the U.S. being in an economic boom, the contribution of housing is near historic lows. The recovery is lead by exports, consumer spending, and globalization. The United States will surprise many with huge growth rates in about 3 to 5 years time.