Every day, there are headlines and predictions about how “college is a bubble,” or about the “trillions of dollars of student loan debt,” or how the “student loan bubble must burst,” and yet, as the years pass, tuition and debt keeps going up, and the people who keep predicting bubble and crisis must revise their their forecasts accordingly. So why does higher education keep defying predictions of its collapse? What is going on here?

From College Degree – A Necessary Evil:

In spite of increasing debt and tuition, no matter how you crunch the numbers [1], college grads–especially ‘high-ROI’ subjects such as computer sci, econ, math etc.–do way better than non-grads. And the gap in wages and employment between grads and non-grads, and especially since 2009, is the widest it has ever been and shows no signs of narrowing. In the aftermath of the financial crisis, college is more expensive but also more necessary, partially due to the continued decline of manufacturing jobs, but the failure of middle-class, medium-skill jobs such as construction and auto to recover to their pre-crisis peaks .

Other types of jobs such as energy and mining, although they pay well and don’t require a college degree, are very volatile and cyclical. The result is a bifurcated labor market with a lot of low-paying jobs such as healthcare and the service sector, some high-paying jobs in legal, medical, tech, and various ‘creative’ and ‘administrative’ fields– but not enough in the ‘middle’. This also weakens the ‘family structure’ because the need to always be moving and looking for work makes it difficult to settle down and raise a family.

People fail to realize (and the media ignores the fact) that college debt, as bad as it is at the national level (at $1.5 trillion and growing), at the individual level, is a better ‘deal’ than credit card debt or auto debt. This is also why studies that show millennials having negative net-worth due to student loan debt are also misleading. $50k of debt for a degree is much different than $50k of debt for a new car. The college degree has much better payment terms, lower interest rates, cannot be repossessed, generous deferment and forbearance plans, and gains value in the form of higher wages. Although the car can be resold, a new car typically loses about 35-50% of its value within 3 years. It’s not uncommon to read stories on YouTube and Reddit of people who have are making six-figure incomes and have stock accounts, a home, and other savings and investments despite having student loan debt. If you’re making $70k+ year out of college (which is not that uncommon for STEM) and keep expenses low, the student loan payments, although a drag, pale in comparison to how much you’re earning on a monthly basis.

What about “useless degrees?” Despite all the media hype about hordes of unemployed gender studies majors, the humanities have never been that popular and have been in decline for a long time. In terms of wages, as shown below, although STEM tends to reign, the data shows that even majors in “low paying” subjects such as literature, social work, education, and philosophy still earn more money than “no college.” Most people graduate in ‘actionable’ fields such as education, psychology, nursing, business administration and management, accounting, or a STEM subject. Gender studies is near the bottom of the heap in terms of popularity, along with religious studies. 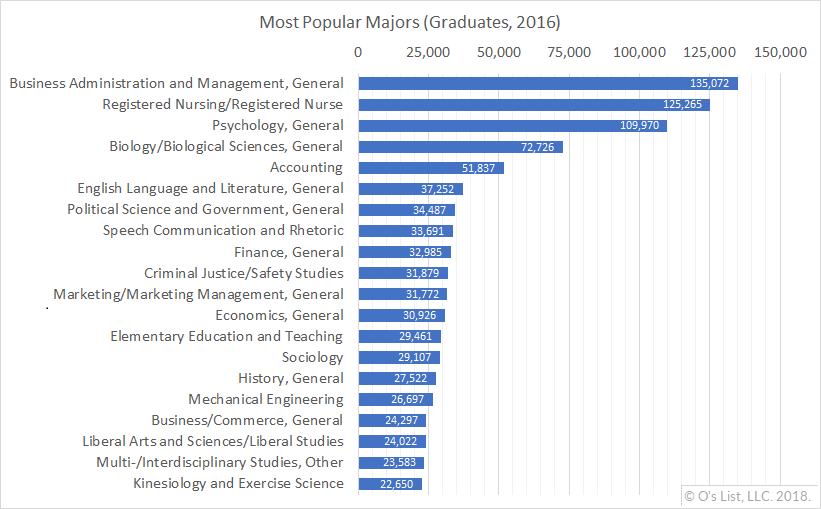 I remember listening to a podcast a few weeks ago in which one of the hosts mentioned that despite having money and a good credit score, he was still declined for a certain type of credit card. It’s much easier to successfully apply for federal student loans than a credit card, a bank loan, or a car loan (or any private-backed loan). For federal student loans, the eligibility requirements are pretty much non-existent (all you need is a GED and to be able to demonstrate  “financial need”). With federal loans, the less money you have, the more you are qualified, whereas with private loans, it’s the opposite. It’s macro econ 101 that the cheaper you make something, the more demand will go up.

Credentialism may may mean higher quality employees and better service for consumers, but more debt at the individual and national level, as well as higher inflation for both tuition and, to a lesser extent, the overall economy. But at the individual level, it’s rational to take on debt because grads make more money (given how cheap financial aid is relative to wage gains), which is enough to offset the inflation and student loan debt in many instances (as the footnote below shows). People acting in their own self-interest makes the debt problem worse in the aggregate. At the employer level, due to the glut of labor and the decline of low-skill middle-class jobs in the aftermath of the financial crisis, it is  also rational to screen for degrees, because all else being equal, a candidate with a degree should be smarter and more competent than one without, which means greater productivity, but that too adds to the problem.

As long as college provides a ‘good deal‘ for both grads and employers in terms of inflation-adjusted gains in wages and net-worth that exceeds the cost of the loan itself, and increased productivity for employers, I don’t see anything changing.

[1] But what about low-ranking colleges? This guy ran the numbers and found even the worse-ranked college still provides a positive ROI: “…and this is the WORST university we give a ranking to? A $309,000 estimated return on investment, not-adjusted-for-major. You have to visit Payscale, click ‘See Full List’, and scroll past 1,752 colleges before you find one that doesn’t have a positive RoI — not-adjusted-for-major.”