This disdain for arguments about the pagan roots of Christian religious practice is a prototypical example of the current turn in atheism: where once atheists competed to be the most disrespectful towards believers, now they compete to be the most respectful. Where once atheist online spaces were filled with sneering and contempt, now they are filled with men (almost exclusively men) who cannot wait to tell the world how much they respect religion and the religious, that they recognize how valuable the community and ceremony of religion are, that they aren’t one of those atheists…. They’re guilty, in other words, of what I’ve accused Jonathan Haidt of, worshipping other people’s worship, believing in other people’s belief. As I wrote,

What Freddie is describing is the metaphor of politics or ideological movements being like a pendulum, periodically oscillating between extremes. For example, ‘internet atheism’ peaked in 2012-2013 or so, and has been in steady decline since, first with r/Atheism ignominiously being demoted from Reddit default sub status, and then soon after the rise of gamergate.

It became seen as low status being too outwardly anti-religion. Atheism became less about openly professing one’s disdain for religion or championing atheism as a good in and of itself, but in Freddie’s words, ‘worshipping other people’s worship’. Haidt, Peterson and others on the ‘IDW’ espouse a sort of humanist style of secularism that acknowledges the value of religion to society, even if one is not actively religious.

A similar reversal was observed with the alt-right, which peaked in 2016-2018 and also has undergone similar decline due to being seen as low status, being replaced by trad-conservatism, which mixes parts of the alt-right with mainstream traditional Christian conservatism.

Again, status is a major factor. People want to see seen by their peers as open minded or cool, even if it goes against one’s own personal beliefs/values; outright dismissing things is hence seen as narrow-minded, hence low status. The alt-right similarly was seen as low-status due to its adherents being perceived as doomers/coomers types or basement-dwelling ‘incels’, in comparison to successful, physically-attractive trads.

I also observed such a reversal regarding the lottery. It used to be seen as cool or socially acceptable dismissing lottery players as innumerate rubes or the lottery as an ‘idiot tax’, but similar to bashing religion, such disdain became seen as low status. As you can see below, comments which repeat this narrative of the lottery being a scam or lottery players being gullible, are greyed-out, meaning they got downvoted: 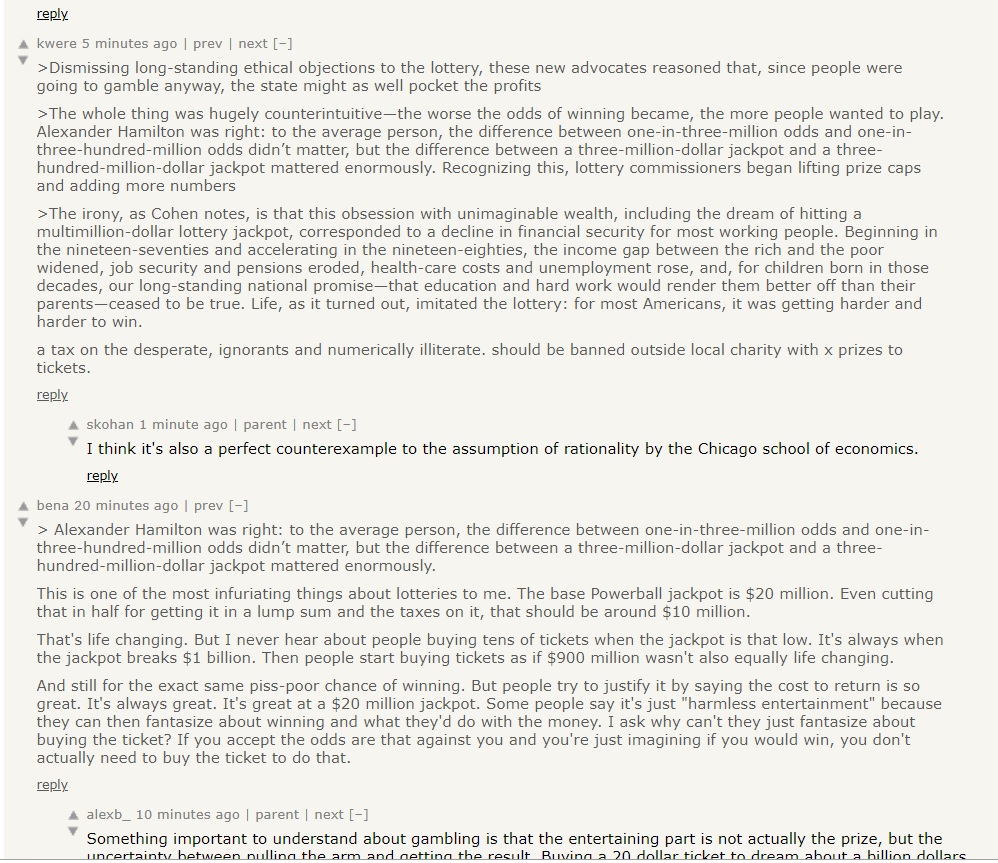 I am not sure when this reversal occurred, but the good thing to believe is that although the lottery has a strongly negative ROI by its very design, the act of playing and the hope or suspense of winning, however low the odds are, is worth the price, even if some people, who can also least afford it, spend a surprisingly large percentage of their income on the lottery (I personally think this is foolish).

Of course there is no assurance of this. As many have observed, the left seems to have gotten only more extreme with each year, without any indication of pendulum swinging back. I am not sure why some intellectual or ideological fads or trends exhibit such reversals and others do not. Wokeness is way more prevalent than internet atheism ever was, so it should probably be close to peaking (insert obligatory Cthulhu reference).

The takeaway is, if it seems like your ideological team/side is having too much success or there is too much of a consensus, enjoy it while it lasts.