I’m sure many are familiar with the so-called ‘lost decade’, in which Japan’s economy and stock market stagnated for over a decade, starting in the early ’90s when its bubble economy burst, and continuing until around 2010. But many European countries are also having a lost decade, which has gotten far less media coverage.

France, Germany, the UK have all stagnated since 2008. Compared to the US, the difference is stark. We’re talking 14 years in which there was zero increase of the size of those economies. 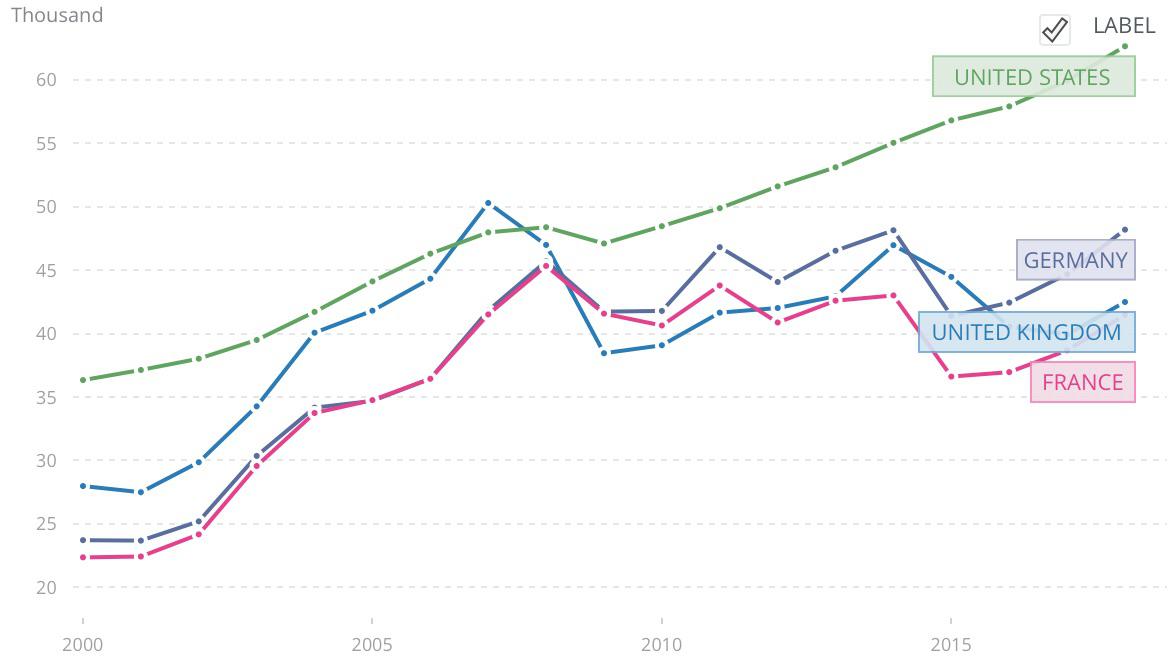 [Note: this in terms of economic activity converted into US dollars. The decline of the Pound and Euro means less GDP when economic activity in local currencies is converted into US dollars. Without this conversion, hyperinflationary countries with collapsing currencies and significant nominal growth would have the biggest economies in the world, which is obviously wrong. This means that low-IQ countries, like Turkey, which have embarked on inflationary monetary policy in the hope of growing their weak economies, are not actually creating wealth, because any nominal growth is merely negated by the collapsing local currency relative to the US dollar and hyperinflation.]

This goes to show how every problem that the US has, the rest of the world has it worse, whether it’s corruption (for example, the VW emissions scandal), wokeness (people in the UK and Germany have been arrested for tweeting ‘hate speech’), Covid lockdowns (far worse lockdown in Germany, which were useless at containing Covid), inflation (10% inflation in the UK and Germany; 70% annual inflation in Turkey compared to 8% here), falling currencies (the US dollar made a new high this week as the Euro, Canadian Dollar, and Pound keep falling, as I predicted many times since 2015 on this blog would happen), and weak GDP (Europe’s lost decade).

The US dollar is at 20 year highs…guess whose blog predicted this would happen?

[Here’s a post from far back as 2015, Economics Myths, Part 2: America Is In Decline/The Dollar Is Weak, in which I made a similar argument as now predicting that the US dollar and GDP would trounce foreign peers…still correct 7 years later]

This is pretty funny…Western Europe is struggling with surging energy prices and shortages due to dependence on Russian natural gas.

Why UK energy prices are rising much faster than in Europe

Germany’s circumstances are particularly urgent: The country’s dependence on Russian gas leaves it vulnerable as it desperately searches for alternative supplies. The nation is considering restarting coal-fired power plants and may extend the life of remaining nuclear power plants, while urging gas conservation. Industries in Europe’s biggest economy are already taking a major hit.

Trump was trashed by the Western media for pulling out of the Paris Agreement and for supposedly being a Putin appeaser, yet Germany’s dependence on natural gas not only enriches Putin but created a major point of failure for its economy. It’s easy to pretend to ‘go green’ and lecture the rest of the world when Russia is supplying you with cheap gas, which worked until 2022.

This goes to show how those supposed sophisticated or enlightened Western Europeans, who are held up by the liberal media as America’s moral superiors, have the same energy dependence and shortsightedness, if not worse, as the US does.

Only Japan has resisted the post-2020 trend towards higher inflation: 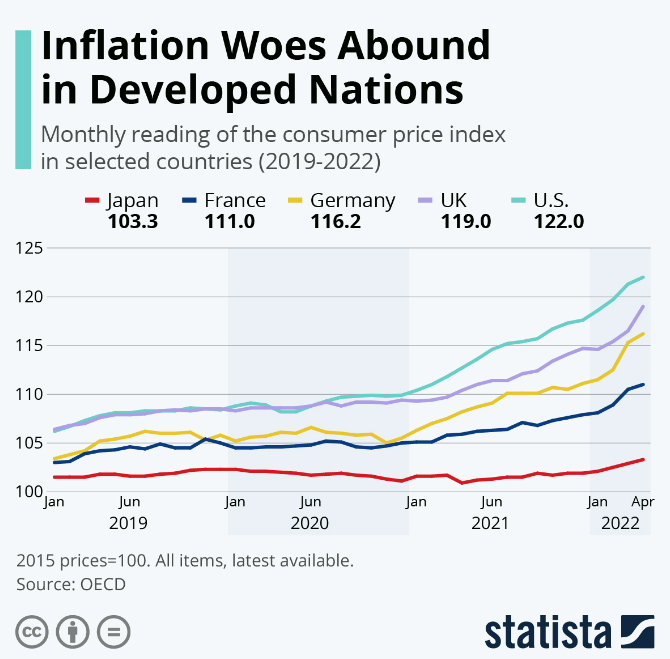 Admittedly I was wrong in failing to predict the recent surge in inflation, but also was almost everyone else, but my thesis or ‘grand narrative’ of the US being ahead of the world, the rest of the world being in worse shape than the US, and the rest of the world collapsing before the US does, is still true. The handful of people like Peter Schiff were right about inflation in 2021-2022 were still wrong from 2008-2020. Moreover, Mr. Schiff was dead wrong about the dollar collapsing, and gold prices didn’t go up in 2021-2022 despite high inflation.

[The narrative by Schiff and others is that gold is supposed to be an inflation hedge; obviously that failed. I correctly observed, however, that gold is not a hedge against inflation but rather a hedge against currency collapse for ex-Americans. Because the US dollar is the unofficial global ‘unit’ of wealth, gold prices are understood to be quoted in dollars, so converting a falling local currency into gold helps preserve one’s purchasing power and dollar-denominated wealth when gold is converted back to said local currency. For for Americans this does not apply, because Americans are paid and transact in dollars. This is subtle but it matters a lot.]

In conclusion, all of these people who are always predicting collapse or crisis keep getting it wrong…the collapse if and when it happens, will not hit the US first…the crisis is in other countries instead like the UK, Lebanon, Turkey, etc. Yes, the US has problems, but we see over and over that elsewhere has worse problems.