I saw this Freddie deBoer article going viral: If Everyone Learns to Code, the Value of Knowing How to Code Will Be Destroyed. I knew that by writing about computer science and econ he was going into unchartered territory, compared to education policy or politics, and it shows.

The inevitable impact will be a tougher job market and strong headwinds on coder salaries. The overall fundamentals for the profession might mean that salaries still increase, but the immense number of new entrants into the field will still be depressing salaries. They have to. That’s how a market works.

He commits some elementary econ reasoning mistakes. For example, the ‘lump of labor fallacy,’ which is the erroneous belief or misconception that there is only a fixed number of people who can do a specific job. The gist of his argument is that more coders means a more saturated job market, and thus lower pay. It’s not that simple. He ignores that the demand for coding and other STEM jobs has risen in line or exceeded the growth of such majors, so supply is merely matching demand. For example: Google, Apple, and Microsoft’s employee headcount has increased 8x, 3,x and 2x respectively since 2011:

And since 2010, employment for computer and math professions has far outpaced the national average: There is also no evidence to suggests salaries are falling; it’s the exact opposite of Freddie’s thesis of supply depressing wages.

For all of the constant “learn to code” rhetoric out there to work, you’d have to believe that there’s essentially insatiable demand for coders, that there’s always going to be more and more jobs that need them. That does not seem to reflect a real-world economic reality to me. All of this is particularly stupid because the great advantage of coding is that code is infinitely and costlessly replicable. If you make a physical product no matter how efficiently you do so there will always be at least some relationship between how much you can scale up your production and the number of people you employ. Sometime has to make the thing. GM can automate as much of their factories as they like, they’ll still have some degree of labor costs that scales with increased production.

Computer science is far broader than coding though. ‘Learn to code’ is just one aspect of computer science and the tech industry overall. ‘Data science’ is probably a bigger deal today than just coding.

In my experience tech companies hate hiring and want to stay as lean as possible. And these are the firms a ton of otherwise bright people are expecting to essentially carry out economy. Recent results are discouraging for the youngest computer scientists.

This applies to all companies. Labor is very expensive.

Then he sorta goes off the rails here by arguing that recent computer science graduates have it bad unless they graduate from elite schools like CalTech or Stanford:

it’s in part due to dynamics that are perverse in this context: many, many people try to join the field and can’t hack it, ending up dropping out of their programs or collecting their degrees and shuffling off to look for good white collar email jobs where they’ll never use the skillset they acquired. And, look, ask the median recent computer science graduate if their labor market is the land of milk and honey. Not your Stanford or CalTech grads, but the median graduate from an average state school. It’s them that policy has to cater to. Better yet, ask a professor at a good-but-not-exclusive public university whether they think their students will just breeze into jobs because they learned to code, even with all that new competition in the chart up there at the top. They’ll tell you. The point is not that their prospects are particularly bad but that a) the major has been sold as the key to riches by a lot of people who are long on rhetoric and short on sense and b) that very cultural expectation that computer science is a safe major makes it less safe!

Well obviously graduates from elite schools will generally have better career prospects compared to graduates from non-elite schools, but this applies to all majors, not just computer science. Coding has competition, yes, but so does all majors. Law school is very competitive. Breaking into journalism is very hard.

The real valuable advice is not “learn to code,” but “be smart and talented.” This is doubly unfortunate, though, as we don’t have a reliable path to becoming smart and talented, and also discussion of talent and intelligent has been written out of our policy conversations, seemingly because it’s deemed impolite. Personally, I would much rather be a talented and adaptable Classics major than a computer science major who’s less bright, less talented, and less able to adapt to an endlessly-changing labor market.

I am not sure where he is getting the idea that comparing the most brilliant of humanities majors to below-average STEM majors is a valid comparison. I’m sure that the top 1% or so of Classics majors will probably be more successful at life compared to the the bottom 1% of STEM majors, but so what? The data still shows that computer science graduates, in the aggregate, earn a lot more compared to most or all other majors. How many companies are paying even low six figures for historians or lit majors?

Also, majoring in computer science is predictive of superior talent and intelligence. How many people are majoring in math or physics but are somehow not bright? Probably not many. The data shows that STEM majors have among the highest SAT scores (which is like a proxy for IQ) of all majors (with philosophy being the lone exception). And when converting SATs to IQ, we clearly see that STEM majors have a 15-20 point IQ advantage over other majors: 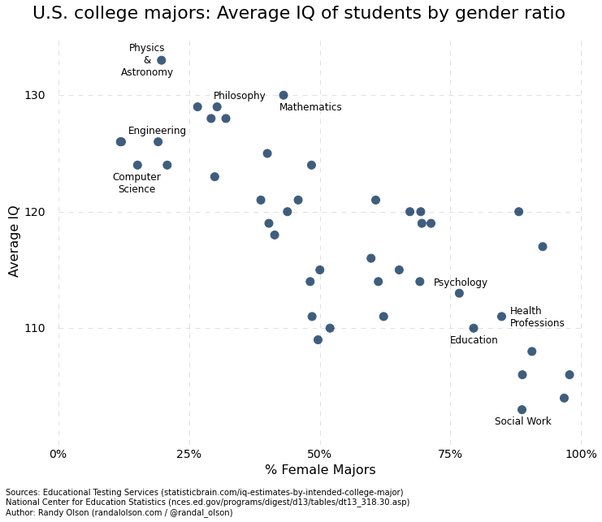 I am not trying to put STEM degrees on a pedestal, but this is what the data shows. Even Freddie who himself has repeatedly argued that the SATs are like an intelligence test, should not dispute this. The empirical observation that STEM majors earn more is a function of higher overall intelligence, secondary to the job market.

To wrap this up, he goes on the defensive:

No one is attacking you or putting words in your mouth. This is not Twitter; you have as much space as possible sufficiently articulate your view in the least ambiguous way possible. People are saying that you are wrong, because you make elementary reasoning errors, probably because you don’t have much background information about economics or computer science, and you make assumptions unsupported by the data.