I saw this article going viral:

US Doesn’t Care About Financial Crimes

There are some common myths that I dispel in an earlier article, but I will expound on:

-That the rich are privileged and can get away with crime

Regarding the first, a bunch of people have recently been arrested for NFT scams over the past year

A total of at least 12 individuals have been arrested for blockchain-related frauds over the past 6 months in the US. This may not seem like much, but it shows that crime which affects ‘average people’ is not being ignored.

What’s notable is that the feds are making arrests just months after the crimes are committed, not years, which shows they do apparently care. It uncommon to make arrests for financial crimes so quickly. In the past it would take years to build a case, now they do it in months. Contrary to the promise of anonymity, the blockchain actually makes it easer to track funds compared to cash or wire transfers.

People who write these articles are making generalizations without looking at the actual evidence. They are still stuck on Enron. They overlook the smaller cases. Also, its not like Enron employees escaped jail time either.

Again, none of these victims of NFT scams were wealthy, nor was the amount of money lost on a per-victim basis substantial.

Financial crimes, interestingly, have among the strict possible sentencing of almost all types of crimes, up to 20 years for money laundering and 20 years for wire fraud. This way more than the possible maximum for tax evasion, obstruction of justice, or contempt of court. It’s comparable to 2nd degree murder or manslaughter, but federal prison and hence no parole, unlike rape or homicide (unless no parole is specified in the sentence). To say that it’s punished lightly is demonstrably untrue.

However, the incidence of congressional insider trading possibly counters my thesis, as an example of the rich and well-connected being privileged, but one must also take into account that cherry-picked examples like Pelosi or 2020 are not representative of all of Congress: just as there are winners who beat the markets, there are many losers, as would be expected in a normal distribution of individual returns. 2020 was an exceptionally good year for Congress, but on other years they lagged the S&P 500. Second, the fact that this is even being investigated is indicative of progress. If insider trading, by congressmen, funds, or employees is a problem now that seems neglected, imagine how much worse it was 50+ years ago. Finally, beating an index does not prove unethical activity. The burden of proof for a criminal case is very high, which is why the feds are known for having a high conviction rate for cases which go to trial (>99.5%).

Also, someone who gets away with insider trading a few times will often keep offending, eventually getting caught, and then will be charged for the earlier trades too. So it may seem like inside traders are ‘getting away with it,’ but it’s also possible that they have not been caught yet and eventually will. The justice system works in part because criminals do not know when to stop. 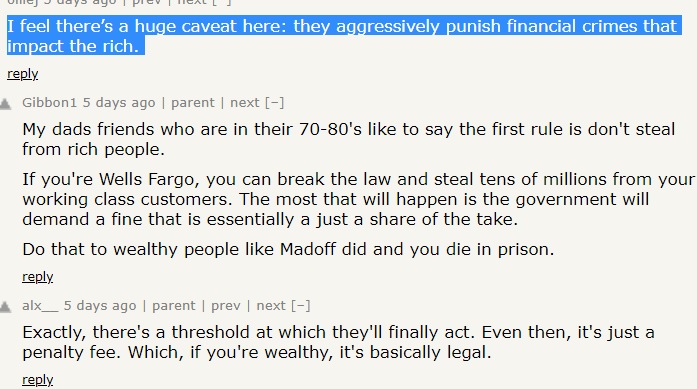 Another common argument as shown in the screenshot above is that it’s a ‘bad idea’ to target or steal from the wealthy, compared to the poor or middle class. The wealthy are protected because of their connections and wealth, as the narrative goes…This is likely false. Being wealthy is not in any way protective against being scammed, nor does being wealthy lead to swift and definite punishment of the scammer, for the below reasons:

1. Wealthy victims may have enough money that they don’t care and thus are disinclined to report the loss, compared to a retiree who is wiped out.

2. Juries and judges may be less sympathetic to wealthy victims.

3. Frauds that target the wealthy tend to be more intricate, and thus the victims may be strung along much longer instead of alerting the authorities, and even then the authorities may not care or wait too long to file criminal charges or investigate.

4. Special agents may not have the tools or resources to investigate sophisticated, complicated financial crimes.

This was the case with the Madoff and Theranos frauds. Theranos was founded in 2003, but it took 12 years for things to start to unravel, starting in 2015 after the WSJ published a major article exposing the company, and then another 3 years for the SEC to file criminal fraud charges against Holmes and Balwani, and then yet another 4 years for sentencing, in 2022. The victims of Theranos were among the most wealthy and influential people in the world, such as the Walton family, yet the fraud was allowed to drag on for sooo long and suck up so much money. It took 30 years for Madoff to be charged, only because in 2008 he turned himself in–the SEC ignored warnings in 2000 and 2005 of the fraud. Although numerous rich celebrities and charities were defrauded by Madoff, this didn’t compel the feds to act until it was too late.