I saw this Lyn Alden article Investing During Stagflation

I think the main problem is that stagflation is so uncommon that it’s not possible to predict which assets or investments will work. There is just not enough data to work with. You have to go as far back as the ’70s or maybe the early ’80s to have stagflation, which is a combination of high unemployment, negative real GDP growth, and abnormally high inflation. Right now, inflation is high, but other data such as the labor market does not yet portend to recession.

Every decade is unique. The circumstances that made certain investments effective decades ago, may not apply today.

Cash and bonds are obviously a rough place to be, because their yields are often below the level of inflation in an inflationary environment. A bond is a promise to pay a certain amount of currency in the future, and the purchasing power of that currency is being diluted.

The problem is that if inflation was to suddenly fall, buying a short-term bond means forfeiting the possible upside that would come from buying a longer-term bond. By now it’s too late to buy short-term bonds, IMHO. You’re going to be leaving a lot of money on the table if inflation falls. Also, 10-year Treasuries are yielding 3% and medium-duration investment grade corporate bonds are yielding 4% despite CPI at 8%, which, ironically, is a better hedge than cash (yielding 1%). So long and medium-term fixed income may be a better hedge than cash or short-term bonds, and also has the benefit of upside if inflation falls. It won’t take much for inflation expectations to come crashing again…some weak labor force data, another Covid relapse, earnings weakness, and so on.

Stocks often don’t fare much better. If the purchasing power of currency is relatively stable, then it’s easy for companies to plan for the future, make long-term contracts, and so forth. If the currency is unstable, it makes planning much harder. A company’s revenue is rising as they raise prices, but their expenses are rising too, and it’s hard to predict whether revenue or costs will rise faster. In addition, as bond yields rise, it puts valuation pressure on highly-valued equities.

Stocks are almost always a better hedge compared to bonds. In the ’80s and ’90 inflation was high, but stocks still posted strong annual real returns, around 10-15%. In the ’70s stocks did poorly but still a lot better than bonds.

Real estate tends to do better than stocks and bonds, especially if you have a fixed-rate mortgage attached to it. The house price (asset) typically adjusts upward with inflation over time, while the the fixed mortgage (liability) gets inflated away. This depends on valuation though; in inflation-adjusted terms, a given house price might stagnate sideways for quite a while.

Agree. But location matters a lot too. Overseas real estate carries forex and geopolitical risk. Lower-income areas tend to be more vulnerable to boom-bust cycles compared to the relative stability of expensive cities. Such as Las Vegas and Miami real estate in 2005, which had a boom-bust cycle. Bay Area real estate has proven to be the best hedge against inflation and has among the smoothest of returns of all asset classes in almost all macro environments, with much less risk and volatility compared to commodities. Thus, there is little need to have to worry about market timing, unlike other investments. Even after factoring in the 2006-2011 housing slump, Bay Area real estate still comes out on top.

It’s hard to beat this chart: 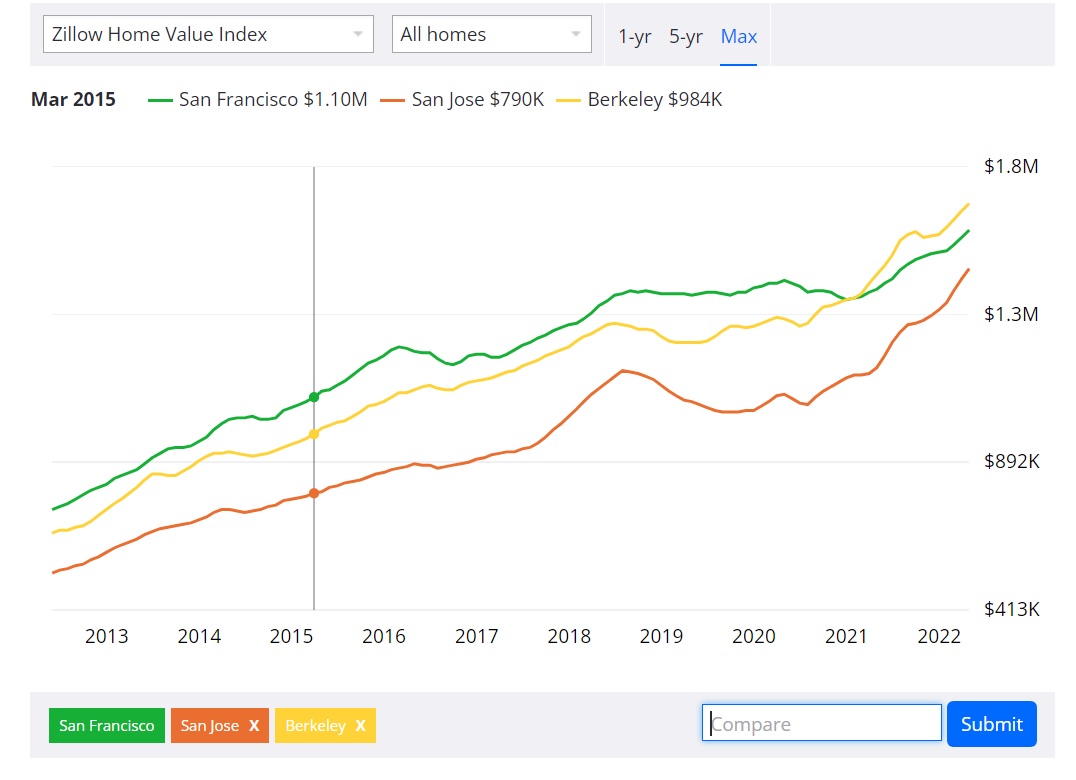 Despite stocks being down 15-30% for 2022, home prices keep rising. Returns can be magnified even more so by renting.

What about REITs? Nope. Those tend to have low correlation compared to the actual home prices. With REITs you’re buying a mixed bag of various commercial properties, whereas with Bay Area homes you are buying the absolute best. REITs pass on the expenses to investors, and also have much more volatility compared to individual homes. REITs also lag on the upside too. From 2012-2014, home prices in the Bay Area, Seattle, and New York City rose 50-70%, but REIT funds did much worse, even way worse than the national average. I often see people on Reddit recommend REITs as a cheap shortcut to investing in real estate, and it’s really not. You’re just buying an inferior alternative/substitute. Either buy the physical property or don’t buy at all.

VNQ, which is a popular REIT fund, gained only 10% from late 2012 to 2014 (which includes dividends), and with considerable choppiness and volatility:

By comparison the Case-Shiller 20-cities index gained 30%, and much smoother: The downside is that Bay Area and Seattle homes are very expensive. It’s not like most people have millions of dollars lying around. But as they say, you get what you pay for: you pay more upfront and in exchange you get better, smoother returns and better inflation-hedging potential.

What about a fixed rate mortgage as a hedge? The problem here is that you’re effectively shorting a 10-30-year treasury bond at an inflated yield, by doing this. You’re making a bet that yields will keep going up, and if you’re wrong it means overpaying. But if Bay Area homes continue to gain 15-20%/year, then even a 5% mortgage should not be a problem.

Monetary commodities (e.g. gold and bitcoin) have an eventual correlation with inflation but not necessarily at the exact moment of high inflation like industrial commodities do. Gold in particular tends to do well during stagflationary environments, where economic growth is decelerating but inflation is still pretty high. It also tends to hold up well in outright recessionary/disinflationary environments, at least compared to equites.

Hmmm…but there is insufficient historical data to make such an assumption that Bitcoin will eventually correlate with inflation. For 2021-2022 Bitcoin has lagged inflation considerably. So she is sorta indirectly admitting that Bitcoin is ineffective as hedge, which is what I have been saying for the past year.

Even if Bitcoin is eventually correlated, from what price level? This detail matters a lot, because Bitcoin’s real returns since its inception–in spite of recent selling–still way exceeds CPI. So if it was to revert to ‘only’ tracking the CPI, this would probably imply a 99-99.99% loss of value. So if the price level is $100, and the price today is $30,000 and CPI rises 4%/year, then it will take 145 years for the base price to converge to the present price.

Regarding gold, there was only a single period of stagflation, the 70s, so it’s hard to make a determination if it will work as a hedge today if there is stagflation. Inflation was high during the ’80s and ’90s, yet gold and other commodities did poorly failing to hedge at all.

As said before, Bitcoin is not a hedge. It’s down 30% in the past week alone. The best hedge is Bay Area real estate, followed by real estate in general, stocks, bonds, and then lastly commodities. I am ranking commodities below bonds because they have more volatility and worse returns overall. Also, I think the issue is it’s too late. Periods of stagflation tend to be brief, so recommending already inflated assets, such as gold or oil, as hedges may be too late. The time to have gotten a fixed rate mortgage was a year ago, not now.