Bitcoin continues to unravel, down 40% in 2 months. The question is how did so many people, supposedly experts, get it so wrong.

Here is Josh hyping Bitcoin and MicroStrategy in February 2021:

One year ago, MicroStrategy was a mundane, third-tier publicly traded software concern with a moribund stock price that hadn’t moved in nearly two decades. Then the CEO decided to dump most of his treasury into Bitcoin. The the stock went from 100 to 1000. Now he’s doing a convertible bond offering (more free money) with the express purpose of buying more Bitcoin. He’s not even pretending to invest in his company’s software products. He’s not working on productivity nor innovation. He’s simply creating value out of thin air through a massive bet on asset price inflation. Equity money is free. No interest rate to repay. The only cost is dilution of the existing shareholder base. But the existing shareholder base is probably 100% Bitcoin Zealot, so give the people what they want. They want more f***ing Bitcoin. “Drown us in it, if you please, sir.” Dilute them for the right reason and they will reward you with an even higher share price ex-post. 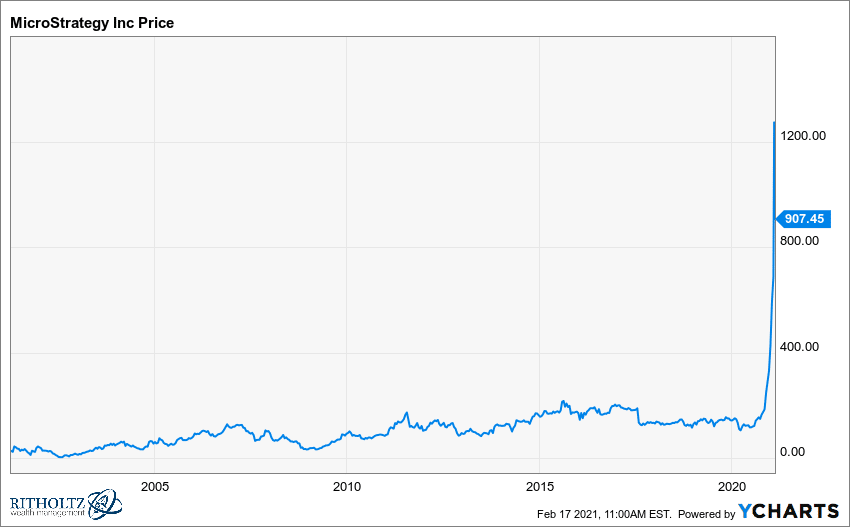 Today MicroStrategy trades at $470, a decline of almost 50% from when the above chart was posted, versus 20% gains for the S&P 500 in that same period.

In case it’s not already evident, Mr. Saylor is a fraud:

Michael Saylor’s entire company was built on deception. The dotcom hype helped carry his stock from $30 to over $3000 in just a few years, but that all reversed (-99.9% crash) when the company was forced to restate its accounting data, which had all of the profits they’ve ever claimed to have made, erased.

On December 14th, 2000, the Securities and Exchange Commission (SEC) opened an investigation into Michael Saylor and accused him of being a fraud.

Like most SEC cases, they usually end with a settlement, and so did this one. Without admitting or denying the allegations, Saylor agreed to pay $8.3 million to shareholders and a $350,000 penalty to the S.E.C.

Don’t say because it’s worthless, it’s clearly worth over a trillion US dollars to lots and lots of people. They may change their minds, but right now, it’s worth what it’s worth. Remember what I said in February: “That sounds stupid, I’m buying some just in case…” is still the vibez. 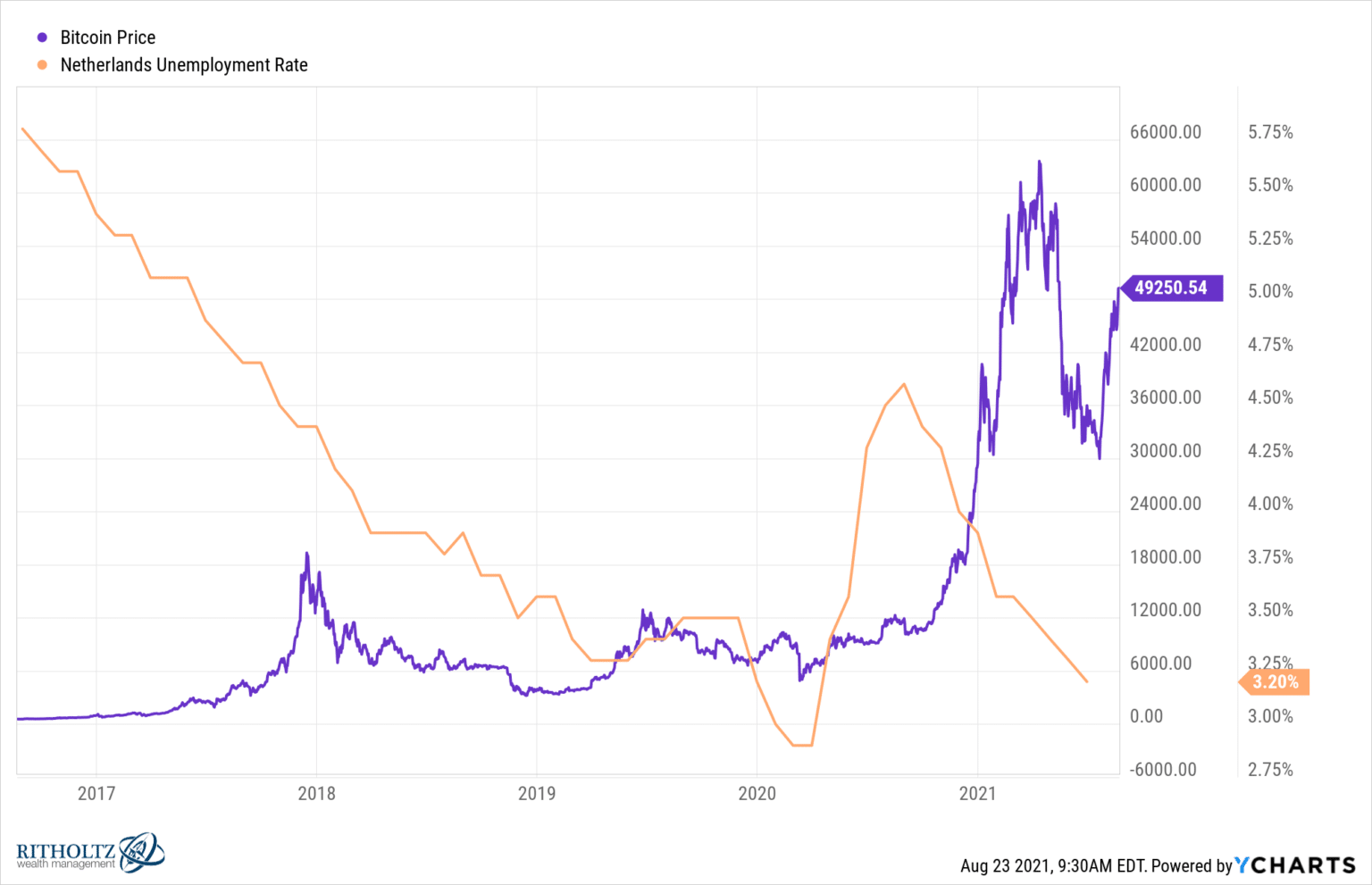 When I claim to be one of the best investors and forecasters in the world, it’s not hyperbole, but based on results that can be verified. That’s why I knew that Bitcoin would do badly relative to the market. Anyone can say they are good at something, but most of the time their results and forecasts prove otherwise.

The best hedge funds do not accept outside money or only reluctantly. If someone is constantly begging for money or advertises their services, as Josh does, then it’s almost a certainty that the performance of their strategies is mediocre at best, or they are just repackaging something that already exists (like index funds) but with high fees attached. The best funds have the opposite problem: having to turn away outside money. Renaissance Technologies does not need to advertise; the performance speaks for itself, and they do not accept outside money either.

There is an epidemic of so-called ‘value vampires’. These people, usually highly-paid professionals, are vastly overpaid relative to the value they produce, their skill, or expertise. They are especially common in the financial services industry, such as analysts, money managers, venture capitalists, or even economists. It’s like the ‘bullshit jobs’ equivalent of white collar jobs. Unlike coders or engineers, they are not actually producing anything, but rather serve as middlemen between investors and the actual product, earning large commissions along the way. I guess you can call them gloried salesmen or gloried fortune tellers.

The epitome of such an individual is Cathie Wood, who is worth hundreds of million of dollars despite her Ark Innovation fund delivering among the worst returns of any fund for 2021 (50% off its highs, compared to 2-5% losses S&P 500 and Nasdaq), and also a long history of sub-par performance and fund closures. Ark has done so poorly that almost all of its post-Covid gains have been erased. Another example is Bill Miller of Legg Mason, who oversaw the ‘Capital Management Value Trust,’ which in 2007 had substantial losses that erased a decade of gains, and probably led to his eventual resignation years later. Despite this poor performance, he’s a billionaire.

Other examples: Chamath, who like Cathie Wood is a major Bitcoin evangelist, whose SPACs lost significant value in 2021 against the backdrop of a 27% gain in the S&P 500. Kevin O’Leary of Shark Tank sold The Learning Company in 1999 to Mattel for $3.8 billion, which was an instant write-off and one of the worst corporate blunders ever (at least for Mattel). Same for Mark Cuban, whose sale of Broadcast.com to Yahoo for $5.7 billion (of which he pocketed $1 billion), in 2000, holds the record probably for the most expensive domain name purchase ever (it used redirect to Yahoo.com but now it’s a vacant parking page).

Another sign is poor analysis, such as making assumptions or claims that are easily refuted by obvious counterexamples. For example, a common assertion is that rising interest rates will hurt stocks, ignoring that stocks did well in 2016-2017 despite rising interest rates or in the 90s too. The S&P 500 gained 30% in 2013 and another 15% in 2014 despite the fed signaling an end to QE. Also, poor understanding of risk/reward analysis. Anyone who can plot a chart would see that Bitcoin fails in this regard since 2018, having considerable volatility relative to returns.

No understanding the concept of rational expectations: if events, such as rate hikes, are already known, they are already priced into the market. The only way rising interest rates will hurt the stock market or the bond market is if rates rise more than expected, or the consequences are somehow worse than expected.

They shoot off these ridiculous price targets and other forecasts that have no hope of ever happening (like Bitcoin going to $1 million), knowing they will never face any repercussions for being wrong so often, or people heeding their bad advice and losing money. If you’re hyping Bitcoin when superior and safer investments exist, it means you are giving bad financial advice and have failed at your objective (to yourself and your clients) of creating and or preserving wealth. You’re just gambling at this point.

Not just limited to financial advice, but consider all the ‘experts’ who were wrong about Covid over the past 2 years. Joe Rogan is taken more seriously than doctors or health experts. A nobody with a Substack page is probably a better source of financial advice and insight than probably any billionaire or overhyped entrepreneur (Gary Vaynerchuk ​comes to mind in this regard).

But about all the earlier years? Couldn’t 2021 just be considered an outlier for Ark and others? Maybe, but if an outlier means your fund losing 40% of its value against a 27% gain in the S&P 500 or Nasdaq, is not just a ‘bad year’ but a catastrophic failure. Such a loss means that any earlier gains are almost assuredly just luck or other factors, not skill.