In response to a tweet by Robert Reich regarding Elon Musk’s wealth, Eric tweeted:

Would you like to discuss this and related matters? I would be open. https://t.co/3j7TUgu1aO pic.twitter.com/YWnHebkNV9

As people in the comments noted, the graph Eric chose was misleading:

What happened was in 2020 savings deposits were re-categorized as m1, which caused about $11 trillion to be suddenly be added to the m1, causing the distortion.

Regarding the meat of the tweet, is he right about Tesla’s recent share price appreciation being attributable to the fed and the inflation of the money supply? Likely not.

As shown below, since 2018 Tesla has staged one of the greatest corporate turnarounds ever, from losing hundreds of millions of dollars a quarter, to generating a billion dollars in profit a quarter and having $16 billion in cash on hand (for 2018 and early 2019 Tesla only had $2.5 billion, hence all the predictions it would run out of money, but Tesla was more than able to raise money at good rates by selling debt or through secondary offers, so Tesla’s likelihood of bankruptcy was never as high as the media hype at the time would suggest). For years I have been recommending Tesla on this blog, such as the 2018 article Short-sellers wrong about Tesla. Tesla has so much money to burn now that it bought $1 billion in Bitcoin in 2021. From first-hand experience, I see Teslas everywhere: on the street, parked in garages, recharging, etc. It’s no longer just a niche brand but fully mainstream.

Regarding the fed, correlation does not imply causation. Here you can see the m1 money supply going back many decades: 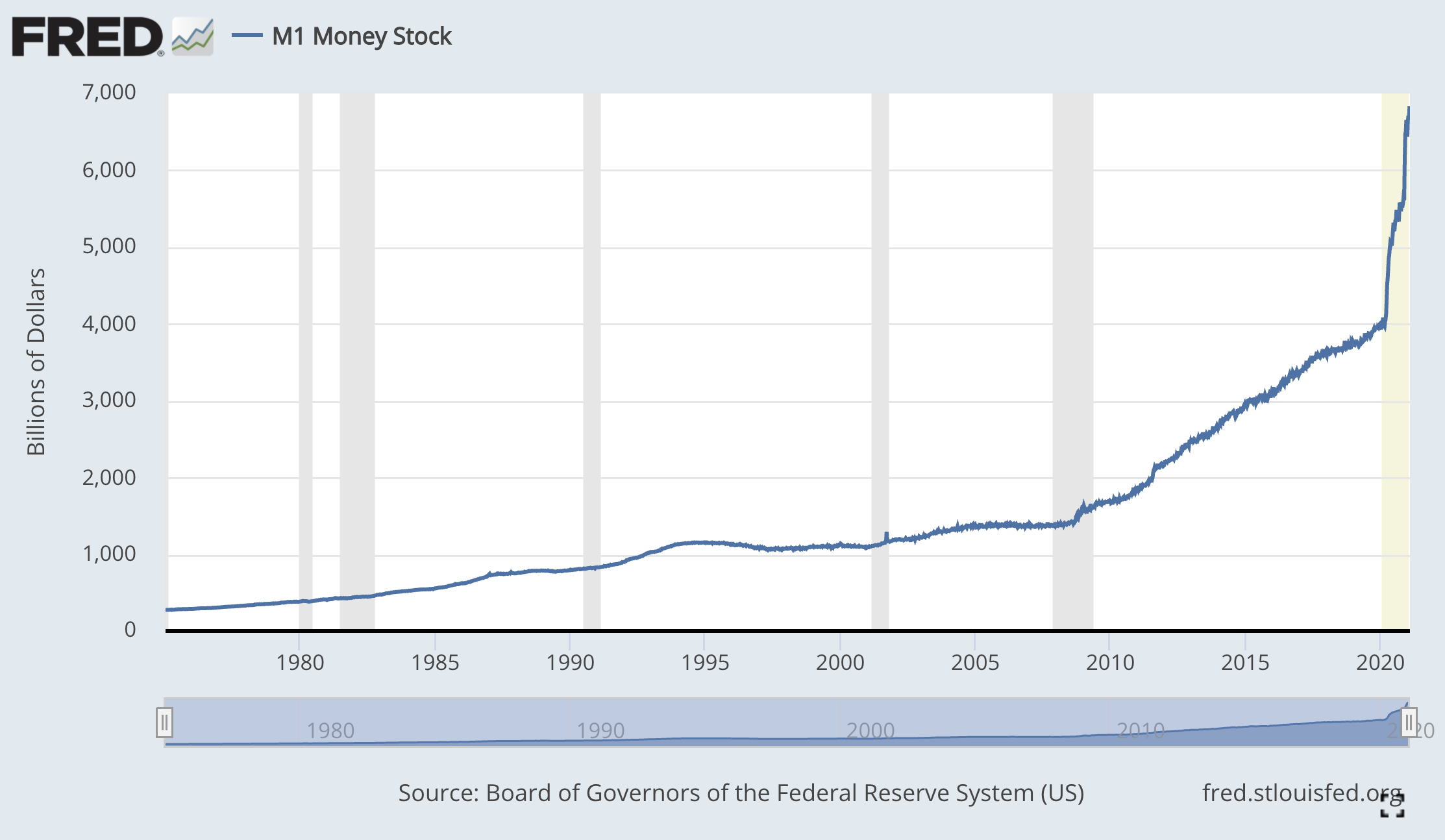 The m2,which is a broader category, shows continuous growth: But despite the m2 supply increasing from $5 trillion to $9 trillion between 1999 and 2010, the stock market still had one of its worst decades ever, showing how little correlation there is between the two. There was no discernible spike in the m2 despite the dotcom bubble either, which saw the Nasdaq triple from 1998-2000, just steady growth.

Central bankers cannot create growth and bubbles ex nihilo. They can try to create conditions that are conducive to speculation, such as low interest rates or QE, but if no one is biting, prices will not go up. In an asset bubble, no one is thinking about the interest rate. It makes no difference if interest rates are at 1% or 7% if speculators are expecting to double their money in a year. Low interest rates can probably exacerbate wealth inequality by making credit cheap, such as low mortgage rates, but 2-6% interest rates between 2004-2006 did not stop the housing market from inflating, and again in the 1990s when interest rates were also high. Likewise, it took about 3-4 years after interest rates were cut to zero in 2008 for housing to stage a comeback, probably because the economy was weak and investors averse to risk. Credit card interest rates are at double digits, but this does not stop Americans from impulsively buying junk. Japan pursued some of the most aggressive fiscal and monetary policy during the 90s and 2000s to boost its flagging economy, to no avail. Western Europe has had poor performance for over a decade despite negative interest rates.

Regardless of what the fed does, investors are not going to waste money on things they perceive to be poor values, or at least not for long. Even during the peak of the dotcom bubble, pets.com and Webvan never did well, their share prices falling instantly after their weak IPOs, and both filed bankruptcy not long later. A rising tide may lift many boats, but as far as investing is concerned, not all of them. Private capital will always be scarce no matter how much money the government may print.