I was looking to understand why @nntaleb was cyber-bullying a young woman who writes on economics, and I stumbled upon a frankly unbelievable history of inability to handle even gentle criticism—by a man who titled his book "Antifragile."

This behavior goes back years. pic.twitter.com/Jm2cSqC0EC

(I dunno what the point of blurring-out the usernames is. If you just search Twitter for the quotes verbatim you can see who replied to whom.)

The young woman in question is Lyn Alden:

People on this thread need to know that @LynAldenContact is a crank in the classical and every other sense of the world, that is the snake oil variety, with the intellectual rigor of an overly ripe cucumber.

I am not personally offended much that Taleb uses foul language…it’s even amusing, because the mainstream media is so inhibited by politeness of those undeserving of it. Mr. Snowden is right that Taleb is kinda an asshole, but far worse is Twitter’s selective enforcement of the rules. Taleb is allowed to call anyone he disagrees with a moron or an imbecile, but for Roger Stone, Milo, James Woods and others who got banned or temporarily suspended for using similar language, it’s called ‘harassment’, ‘hate speech’, or ‘inciting violence’. That’s the point Mr. Snowden should have raised.

I raised this same point many months ago:

Will Taleb’s Twitter account ever be penalized, let alone suspended, for repeated violations of the Twitter TOS regarding harassment? Of course not. The left always looks after its own. Toeing the ‘party line’ about Covid gives his account immunity, as he is a useful idiot and propaganda apparatus for the left. Meanwhile James Woods got temporary suspended a long time ago for some really lame reason I cannot recall. Roger Stone was banned a few years ago for calling Don Lemon a ‘fucking idiot.’ And, of course, Trump was banned for the vague charge of ‘inciting violence’, which is a favorite boilerplate excuse of the left to ban conservatives from its platforms.

As if it was not already abundantly obvious, Taleb’s a full-blown social justice liberal, as I correctly observed years ago. He occasionally has some interesting points, such as about the convexity/concavity of risk, the non-linearity of harm, etc., yet also tweets stuff like this [1] and celebrates the cancellation of those who he deems as ‘racist’ (like Stefan Molyneux and others) [2], just as the SJW-left does. Or equating skepticism of the Official™ Covid narrative and Vaccines™ with psychopathy. [Lindsey Graham showed symptoms and tested positive for Covid despite being vaccinated–something we were told 6 months ago was an impossibly, according to The Science™.]

Taleb is still holding a grudge against Trump and Molenux a year later even though both have been removed from Twitter and most of other social media. The ineluctable reality that some groups are smarter than others and that such cognitive disparity, in part, explains why some countries are more successful than others, is racist according to Taleb.

And a grudge against GM too, white knighting for Ralph Nader

2) I have never owned a GM car because of the harassment to which they subjected Ralph Nader and his old mother, in addition to a smear campaign. And never will.https://t.co/nTN2AjWiVG

A reminder that it is a moral duty to gloat about Molyneux demise: he considers people from some countries deemed of low national IQ (on fake research) as unfit for discussion. He uses "science" to unleash barbaric hordes ag. detractors w/racial slurs.https://t.co/gD5Y60gnAG

Also came cross this A Tale Of Two Talebs

is a genius, as above. More than just an extremely intelligent individual, he has a rare gift of making his insights perfectly accessible. That said, Taleb, l’autore, often goes too far with made-up words, gratuitous self-reference, and all manner of other sneaky parlour tricks to create the illusion of a daunting and all-encompassing oeuvre. Much further down in the essay, I surgically deconstruct this with a mathematical precision for which readers’ minds have not yet been adequately lubricated.

If by generating formulas with Mathematica and pasting them into PDFs, then yes Taleb is an “extremely intelligent individual”. Mathematica is awesome (so is WolframAlpha, which is based off of Mathematica and made by the same company) and is very useful for solving things, so are PDFs, but actual mathematicians tend to start the conceptual framework, and then use the software to check. It’s not like they start with the software. Given the condition of the problem, a competent mathematician can rationalize and devise the solutions (or at least the behavior and properties of the solutions) without having to test it. This is very hard to do. This is what Galois did. Just by knowing the coefficients of the polynomial he was able to devise a scheme to determine if it could be solved with a finite number of root exactions and elementary operations.

A much easier example is, suppose you want to sum the numbers 1+2+3+…+100. Adding each new number individually to the prior result would be considerable work. The trick, based on an easily observable pattern, gives 100(100+1)/2 as the answer, without having to perform 100 additions. Much of math is not about computation but about finding tricks/shortcuts to solve problems that may otherwise seem impossible.

Anyway, Taleb rails against academia and peer review, [3] yet has tried, and not surprisingly, failed to get his PDFs published in reputable journals [4]. I guess actual mathematicians and statisticians are not as impressed by Taleb’s PDFs as the remaining Twitter users he has not yet blocked, are. I have seen undergrad papers in math or physics with more mathematical competence than the stuff Taleb publishes. As discussed here , Taleb’s originality and depth of work doesn’t even rise to graduate level. I think peer review is far from perfect , but Taleb’s biggest problem is the quality of his work is just generally poor, with cannot be fixed by improving the peer review process. In one recent paper he argues that Bitcoin is worthless based on some math hand-waiving. It’s total nonsense, and for someone who claims to reject the Neoclassical framework of economics, this paper is the epitome of it in its assumptions. 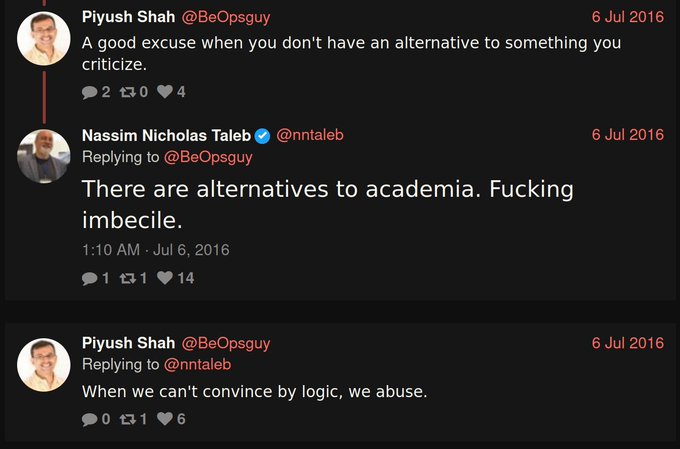 Much, if not all, of Taleb’s insights however are reformulations of existing concepts, some of which are centuries old. Taleb’s ‘black swan’ concept is a reformulation of Hume’s skepticism of induction; Taleb’s turkey parable is literally a facsimile of Bertrand’s Russel’s turkey paradox, as well as Milton Friedman’s ‘Peso problem’. There is nothing inherently wrong with repackaging old ideas if the ideas are worthwhile, to help disseminate them to a new audience, and it’s not like everyone has the time or patience to seek out the source material. Original ideas are hard to come by, and even the most celebrated of intellectuals are only known for a handful of key insights that can be distilled to a few buzzwords: Foucault ‘truth as power’; Einstein ‘relativity’; Habermas ‘the public square’; Kant ‘phenomena and noumena’, ‘priori, and posteriori’, and so on. But Taleb has built a lucrative career as a public intellectual by effectively passing off such ideas as his own and hoping that no one notices.

It says it was accepted in “International Journal of Forecasting” which is not as impressive as it sounds, coming in at #3000 in joural rankings and has an impact factor of 3.6, which is really poor.