Krugman Wonks Out: Return of the Monetary Cockroaches

Krugman is both right and wrong. I agree 100% that there will be no hyperinflation. All this doom and gloom about inflation will keep being wrong. These alarmists like Peter Schiff and others have been wrong about everything for the past decade, so there is no reason to expect they will suddenly be right. Much of the rise in CPI is due to oil suddenly and rather inexplicably surging from $20-30 during the pandemic to $65 now, in large part due to supply shortages after the pandemic , so when the economy picked up, production was still depressed. Also, 4% inflation is hardly hyper-inflationary. Even if inflation goes up a lot, stocks and real estate will do well, so from an investor standpoint it is nothing to worry about. An economic environment of rock-bottom interest rates and anemic treasury bond yields combined with rising inflation is the perfect environment for stocks, because there is no alternative. In the 2000s, 80s and 90s it was a combination of high interest rates plus high inflation, so real returns for stocks were weaker, and thus treasury bonds and bank deposits were more attractive relative to stocks and real estate–but not anymore. The economic backdrop for stocks today is possibly more bullish than any time in history. I am fully invested and no plan to sell.

Krugman gets it wrong here

Before 2007 it was expensive for people to hold money, because cash yielded no interest while bank deposits paid less than other assets like Treasury bills. So people held money only because of its liquidity — the fact that it could readily be spent. When the Fed increased the money supply, this left the public with more liquidity than it wanted, so that the money would be used to buy other assets, driving interest rates down and leading to higher overall spending.

But when interest rates are very low — which they have been for years, basically because there’s a glut of savings relative to perceived investment opportunities — money is, at the margin, just another asset. When the Fed increases the money supply, people don’t feel any urgent need to put that cash to more lucrative uses, they just sit on it. The money supply goes up, but G.D.P. doesn’t, so the “velocity” of money — the ratio of G.D.P. to the money supply — plunges:

For it to be expensive to hold money implies that the CPI is greater than interest on cash (a negative real interest rate). But during 2000-2007, and also in the 90s, it was the opposite: 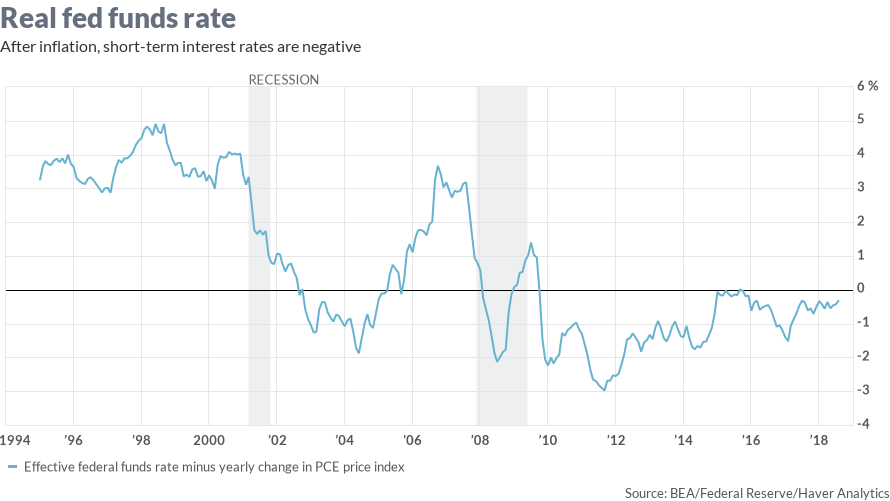 Second the fed does NOT increase the money supply. You would think that if anyone would know this it would be a Nobel Prize economist. Only the Treasury can do this. Indeed, m2 did not spike in spite of rate cuts and qe programs in 2008-2010 , only to spike in 2021 due to the stimulus programs: “When the Fed increases the money supply, people don’t feel any urgent need to put that cash to more lucrative uses, they just sit on it.”