The delamination of the stock market and the tech sector from the rest of the America continues, as Tesla and the stock market continues to relentlessly push  higher in spite of Covid, protests, and the outward appearance of total unrest and dissolution and breakdown of civic trust.

As I said last week, the Covid deaths and cases don’t matter much in terms of the economy, because the people who affected, by in large, contributed little economic value while alive in terms of consumer spending and productivity. It’s overwhelmingly very old people, people with comorbidities, and or low-IQ groups who are getting sick and dying of Covid. This is why I am one of the best economic forecasters because I was able to figure this out back  in May 2020 by  applying my knowledge of HBD and investing, before almost anyone did. With this foresight, I added to my stock accounts on the dip back in March-April, coming out way ahead.

In regard to protests and the breakdown of civic trust and trust in the ‘democratic process’, as I also correctly said, the economic impact of this is nugatory. This does not have any affect on consumer spending, the tech sector, Tesla car sales, or the propensity of people to stream Netflix, buy iPhones, use Instagram, or click Facebook or Google ads, etc.

Already, two of my 2021 predictions have come true. Tesla stock is worth $850 billion, up 30% just 9 days into the new year, and only $150 billion from my target. Yes, technically, it has not hit $1 trillion, but I think it is a foregone conclusion it will happen very soon.

If you look at the stock chart of Tesla, you can see how after seemingly doing little for a nearly decade, a metaphorical switch was flipped: 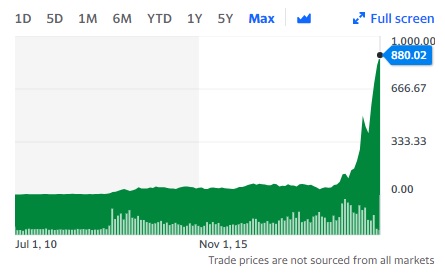 This is nearly perfect facsimile of the hockeystick chart of the singularity.

That what is happening now, merely a year after I prophesized  it.

Market participants are FOMO-ing into tesla in anticipation of this transition 2-3 generations from now, and Tesla is the best-positioned company in the world to benefit from it. It is not a bubble , but rather the price will keep rising in antipcaiton of this transition, until eventually leveling off, so rather than crashing as bubbles do, the second derivative will eventually go negative, much like the log(x) function or the logistic function , after attaining a market cap of around $5-15 trillion. Although the exact figure  and dates are not that important; what is important is, there will not be a crash as so many are predicting. Second, that Tesla is a tech singularity play, not just an energy/battery/car play. Third, within a decade, Tesla will expand its dominance beyond just batteries and cars, to include the production of energy on a global scale, and, combined with Space-X, the creation of orbital outposts, and space resource extraction possibly within 20-30 years, at which point Tesla will have splintered off from the US and formed its own sovereign governance that works in parallel and with the US government. To save money and boost efficiency, the US government will, within the next decade, outsource its roles to Tesla, Amazon, Google, and other dominant tech stocks, in exchange for income tax revenue sharing (the idea being that Tesla would be able to collect income tax, in much way the federal government does, unlocking hundreds of billions of dollars of potential revenue). This is similar to a state-owned-enterprise, but the profits would still be privatized, making Musk and early investors substantially wealthier than they already are. With all of this in store, and much more, is it any wonder Tesla stock has gone up so much and will continue to go up for the foreseeable future.

On a related note, there has been considerable discussion online about Tesla and Bitcoin, as both have posted large gains in regent months. If given a choice between investing in Bitcoin or Tesla, Tesla is way better, without an inkling of a doubt. Bitcoin is still crap and has way too much volatility relative to the gains, whereas Tesla has both higher gains and never goes down. Tesla generates billions of dollars of free cashflow annually; bitcoin, being that it is a commodity, earns nothing and generates zero shareholder value. Compare the chart of gold vs. stocks over the past 3 decades to see the difference. This is why over the long-run stocks will always be better than crypto, cars, art, sports memorabilia, etc. (anything whose value is purely a function of supply and demand, not earnings). I predict Tesla stock will far surpass Bitcoin in terms of gains.

My second prediction that I got right, just a little over a week into the new year, was predicting that Biden’s main focus would be on passing a major stimulus package, and sure enough 4 days ago Biden proposed a massive $3 trillion stimulus. I predict it will pass and be signed into law. As it turns out, everyone likes free money, as opposed to court packing or student debt forgiveness. 3 weeks ago pundits were worried about Biden and socialism, yet the huge gains in the stock market is making people richer, not poorer (many on the right equate socialism with poverty). And Trump would have done the same thing too if he won. Both parties are quasi-socialist in their own ways, with the left supporting socialized healthcare and education, and the right supporting a big socialized military.