Browsing various message boards and communities, such as on Reddit and Hacker News, several common questions and concerns keep coming up regarding Covid stimulus, inflation, etc. I will try to address some of these topics.

Will there be hyperinflation due to Covid stimulus? Why hasn’t there been much inflation?

In spite of trillions of dollars printed for Covid aid (and presumably much more to come) inflation as measured by CPI has not budged, for several reasons:

There is insatiable demand for treasury bonds and dollars, and as well dollar reserve currency status means that the govt can find buyers for its bonds without yields rising, hence tempering inflation.

Studies show only 1/3 of the stimulus is spent on consumer goods. The rest is saved, invested, or used to pay down debts. Such deleveraging is deflationary.

The amount of money is still relatively small and infrequent compared to the vast size of the US economy and total consumer spending and other activity. Consumer spending by Americans is around $13 trillion annually, so this stimulus is just 1% of that, and this is assuming that all of the money is spent on consumer goods instead of invested or saved.

Should I use a combination of gold and or bitcoin or other precious metals to hedge against possible inflation?

For Americans, the short answer is ‘no’.

It also depends on how inflation is defined. There is no single answer.

-changes of quantity of currency in circulation (levels of money supply)

-changes in price levels, wealth, and currency relative to some sort of benchmark or standard that may not be the local one.

Even if inflation as measured by CPI was to rise a lot, you would not need to hedge, because everything would be shifted higher, such as stock prices, home prices, wages, etc. Because the US dollar is implicitly understood as the global and standard benchmark/unit of wealth (the Forbes 400 list is in dollars, not Euros), it means Americans do not lose wealth if price levels rise or if the US dollar falls.

Bitcoin and precious metals could be an effective hedge if you live in a foreign country and you need to stave off loss of wealth relative to the US dollar due to the local currency falling against the dollar. Venezuelan citizens who in 2010-2018 converted their local currency into gold preserved their wealth, whereas individuals who didn’t were left with worthless currency and total loss of wealth. America is in an especially privileged position that it can never have this problem, no matter how much money is printed, because global wealth is almost always denominated in dollars. So no need to hedge.

It is uncommon for the stock market to post a negative real return, and when it happens it tends to be a very small underperformance:

Even during the double-digit inflation of the 70s, stocks only lagged inflation very slightly.

What about keeping money in cash?

Given that CPI-based inflation exceeds interest on deposits (2% vs 0%), this is always a bad idea. Stocks are way better choice.

Will the stimulus programs prevent people from working and or create a disincentive for work?

This is a common concern among republicans, much more so than expanding the deficit (the proliferate spending during the Trump and Bush administrations, showed that anti-deficit rhetoric, is just that, rhetoric). For awhile I thought this too, and now realize I was wrong. First, the amount of money is too small and infrequent even meet the poverty line, let alone be a viable substitute for work. $600/month for a year is below poverty. You cannot even live off that, unless I suppose, you enjoy a really, really low standard of living.

You also have to take into account individual preferences. Although some Americas would choose $600-2,000/month in lieu of work, there are many people who prefer having more money over having more free time, and thus would not be dissuaded from working. Republicans erroneously assume everyone prefers leisure over money. People who value free time highly, would presumably drop out out of the labor force and be replaced by people who have higher preferences for earning money. This may be a net-positive by boosting productivity and customer satisfaction, because people who are dissatisfied and do their jobs poorly would presumably leave the labor force.

It is not that the economy collapsed due to Covid, as many wrongly predicted would happen, but rather it got shifted and re-organized to a more efficient state dominated by online firms, big retail, food delivery, etc. The pandemic had the effect of accelerating the US economy to a more efficient state. This is why you should generally be skeptical of media narrative of crisis. Yes, in 2007-2008 the media was right about a housing crisis, but they tend to get it wrong more often than not. Even when there is crisis, it tends to be short-lived and many underestimate the v-shaped nature of recoveries. If you sell your stocks, waiting a few months may mean having to buy back at a higher price even if the crisis has not subsided. Covid is gonna be with us for years and many jobs and businesses will never returns, yet the market made new highs by July 2020.

Although GDP temporality plunged due to Covid, it came roaring back as shown below, and forecasts show strong growth for 2021 and beyond in spite of many businesses still being closed, many permanently: 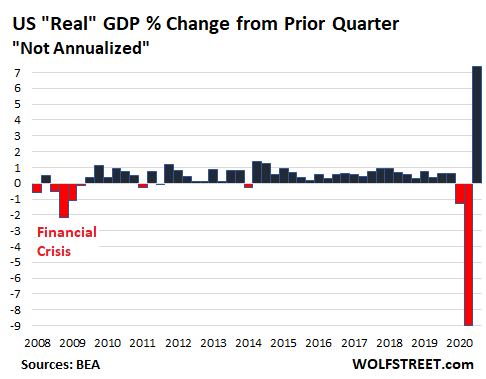 It may seem unfair that ‘big retail’ and ‘big tech’ are the putative winners of the post-Covid economy, and small businesses and low-skilled people are the losers, similar to in 2008 (who were downsized and did not have the luxury of working from home, unlike tech workers), but to quote Rumsfeld, you get the economy you have, not the economy you want.

A common narrative is that the stimulus spending and the fed are why the economy and stock market recovered so quickly. I believe it has more to do with the reasons above–that is, the economy becoming more efficient. The reason stocks have done so well is strong corporate profits and earnings. FAANG stocks generating record profits and earnings. Same for retail and companies like Disney and Walmart. Stimulus spending, 0% interest rates, and QE are insufficient to boost the economy and stock market–no doubt, they help–but it comes down to actual economic activity and economic fundamentals such as consumer spending, B2B spending, and corporate profits. A huge chunk of the US and global economy bypasses the US consumer altogether, such as cloud companies buying ad space on Google, and Google and other big tech companies buying cloud storage. Although it may provide a very brief and fleeting boost, just printing a bunch of money for Covid stimulus is not sufficient to overheat the US economy, let alone engender long-term growth.