A common narrative you see online is how much cheaper things used to be many generations ago, and how everything is so expensive now. The narrative goes along the lines of “In the ’30s, college cost $5/semester and you could buy a home for a couple thousand dollars. Now everything is too expensive.”

Obviously, things are considerably more expensive today than they were in the 30s. But in spite of the popularity of such nostalgia for ‘cheaper times,’ people tend to underestimate or overlook the importance of wages and interest rates, in that not only were things cheaper, yes, but wages were considerably lower even on a real-basis, and that consequently living standards were worse compared to today.

I decided to investigate this further. According to [1] [2] the average annual income in the ’30s was around $1,350, give or take 10%. BY comparison as of 2019, the average annual income for Americans is $40,000. In 1932, the average cost of a new home was $5,700. Today, the median price of a home is $227,000, although, of course, some areas will be much cheaper and others more expensive. So today it takes 5.7 years of wages to buy a home, versus 4.22 years of wages in the ’30s. So by that measure, homes were cheaper in the ’30s compared to today. However, there were far fewer financing options available whereas nowadays home buyers have multi-decade mortgages. The first 30 year mortgage was invented in the ’50s.

Because of low interest rates, home are more affordable now than they have been since the ’70s: 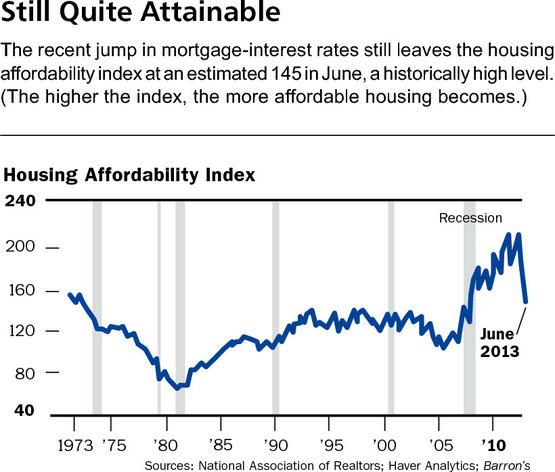 According to [3] home ownership rates from 1920-1940 hovered around 45%, versus 65% today. One would be inclined to believe that because homes were so cheap in the ’30s that home ownership was very high, but it was 20% lower than it is today.

Looking at the aforementioned links, one thing that stood out to me is how low wages were for doctors and lawyers in the ’30s. Doctors, on average, made between $3-4k/year, and lawyers made $4k/year. In today’s dollars, that is, optimistically, $80,000/year, which is quite low. Being a dentist was even worse, paying just $2,400/year, or $42,000 in today’s dollars. Being a doctor or a lawyer just was not that lucrative in the ’30s. Nowadays, doctors can expect to make at least $300,000/year. Even when adjusted for student loan debt, being a doctor is a very lucrative profession. $200,000 of student loan debt to become a doctor, works out to around $2,000/month in payments for a 10-year loan, which may seem like a lot, but is dwarfed by the $22,000/month salary for a starting physician. Same also goes for student loan debt to become a coder, a lawyer, or any other professional job.

In fact, the college wage premium is high enough for virtually all professions, so much so that student loans are ‘worth it’ in terms of higher wages even when accounting for the monthly loan payments. The media tends to only focus on the large nominal figure that is due, but ignore that the payments are quite small on a monthly basis due to the long duration of the loan. A 4-year college grad today can expect to earn $51k/year, versus 30k/year for high school grads or ‘some college’. So So one would have to take out $200k in student loan debt for college to not be worth it ($2,000 in monthly payments negates the $20k/year wage premium), yet the average debt for a graduate is much lower, around $20-30k.

This is why it is not uncommon on sites such as Reddit and Hacker News to read stories of young people who have homes (or have enough money to afford one), in spite of the media narrative of how all young people are overburdened by student loans and other expenses and live with their parents; yes, some are, but many aren’t, yet the media always latches on to the worse-case scenario as being generalizable to everyone. It is not a ‘lost generation’ for young people in STEM fields, finance, medical, or legal, consulting, or any other line of professional or creative-class work, in which living standards are quite good, even when adjusted for inflation and student loan debt, due to low interest rates, high inflation-adjusted wages, and high real returns for assets such as real state and stocks.

The post-2009 bull market is the biggest and longest ever in terms of duration and real gains, surpassing the bull markets of the ’80s and ’90s, which are two decades often held-up as periods of unpresented prosperity, yet on a real-basis the past decade has been even more prosperous (interest rates and inflation were at 5-10% in the ’80s and ’90s, versus 0-2% for the past decade). Millennials and gen-z who began investing years ago and reinvest their savings into the stock market, have amassed considerable wealth, in addition to rising home prices. Although there is an epidemic of young people living with parents, it is not like homeownership was higher back then, but rather young people lived with friends or in other communal arrangements.

Healthcare and health insurance premiums, however, on an inflation-adjusted basis and relative to wages were much cheaper in the ’30s. But one must also take into account that the quality of care was much more limited. Nowadays, treatments are considerably more advanced, so that must be taken into account when factoring in costs. If one’s treatment options were limited to what was available in the ’30s, healthcare would presumably be a lot cheaper but much worse. Moreover, 50% of Americans have employer-sponsored healthcare whereas such options did not exist in the ’30s, so even though prices have surged relative to inflation, the amount Americans are actually paying out of pocket and in insurance premiums is not as bad. When someone gets a seemingly inflated ER bill, it is not like the patient pays the bill out of pocket, but typically the price is negotiated lower and then covered by the insurance company, with the patient only paying a small fraction of the initial sticker price out of pocket.

The same also for clothing. Although costs of services have risen, many of these services did not exist in the 30s, such as cable TV, smart phones, or internet. If one’s leisure choices are limited to what was technologically feasible in the ’30s, such as reading books, going to museums, or listening to the radio, prices would be much lower.

If you go on social media, one thing that stands out is how much ‘stuff’ people have, even middle class Americans. Compare that to 80 year ago, when almost everyone except the wealthy, even the equivalent middle class back then, seemed much poorer. A home would maybe have a few rooms, some furniture, a bookshelf, a fireplace, a radio, and that was it. There were few or no appliances, and it was still not uncommon for homes to not have running water.

Overall, even though things were much cheaper in the ’30s, due to a combination of low interest rats, high wages, and technological innovation, living standards are higher today, especially for Americans in professional lines of work who are able to invest their incomes in stocks and real estate.