So I was wrong when I said the DOJ would not sue Google; they did. Here is the full suit, weighing in at 64 pages. Should google shareholders, executives, or employees be concerned? Absolutely not. The alleged violations are very easy to remedy on Google’s end and will not impact its ad business much, if at all.

It is way easier to file a lawsuit than to win or get any sort of settlement or concession. Ask anyone who has tried to sue Facebook or Google and successfully extracted any money from said companies: it is virtually impossible. Of course, the US government has far greater resources, but faces an uphill battle given Google’s great size and legal firepower.

Although the DOJ technically won the Microsoft case, after an appeal and a long negotiation process, in 2001, the concessions Microsoft made in order to settle the case were so small that they amounted to a slap on the wrist. A federal judge initially ordered Microsoft to be broken up, but that was reversed in appeal–a major win for Microsoft and effectively setting a precedent for tech companies to keep getting bigger.

The timing of this lawsuit sucks, with just three more months remaining in Trump’s first term. If Trump loses, the lawsuit will likely be quashed. So if you need a definitive, concrete reason to vote for Trump, this is it. Unlike a wall, ‘returning jobs to America,’ or deportations, this is something that is in the realm of feasibly.

There is no guarantee it will go to trial. Conditional on Trump being reelected, I think there is a good likelihood Google will settle by making the necessary changes. Crucially, the lawsuit does not recommend Google be broken up, not that it would ever stand anyway.

The lawsuit mostly focusses on anti-competitive practices regarding the Android operating system and distribution channels and anti-forking. The DOJ alleges that through various agreements with hardware manufactures, that Google funnels users into Google-owned properties. These complaints are easy to fix, such as allowing the otherwise open-source Android to be forked, with minimal expected loss of revenue for Google. The fact that Google stock actually rose on this is news, gaining 1.5% in trading on Tuesday, shows the insignificance of this lawsuit as far as Google’s ad business is concerned. The lawsuit does not impact Google’s contextual ad business, which is the main driver of profit. Google ads are everywhere , so even if Google is forced to relinquish some control over its channels, Google’s ads are still going to be displayed on 3rd-party websites.

Further weakening the DOJ’s case, Microsoft engages in a similar funneling practice in regard to all new PCs coming with Bing preinstalled and as the default browser, so it’s not like people to not have choice in regard to choosing between Chrome or Internet Explorer, nor is Google the only company that engages in such a practice: Apple does it too in regard to its app store, Safari, and iTunes being pre-installed on its computers and phones.

Microsoft has had nearly 2 decades to built a superior search engine, browser, and ad platform–given Microsoft’s billions of dollars, brand awareness, and having its browsers preinstalled and the default setting on all new PCs–but failed to do so. Mozilla Firefox also at one point, in mid 2000s, had browser dominance over Chrome and Internet Explorer, but relinquished this lead to Chrome: 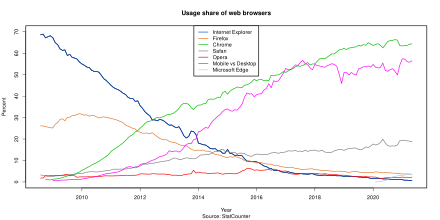 It is not because Google is choking off competition, but because Google offers a superior user experience. Users found Firefox and Internet Explorer to be slow, bloated, and buggy compared to the sleek and nimble Google Chrome. This is corroborated by speed tests that show that Chrome is faster than its competitors. Anyone has the option of installing Firefox or or alternatives to Chrome on their phone, but choose to use Chrome anyway. As quoted by Kent Walker, Google’s senior vice president of global affairs, in a blog post, “people use Google because they choose to, not because they’re forced to, or because they can’t find alternatives.”

So in summary, I am not concerned.

Next , I want to talk about Section 230 and how it is commonly misunderstood by some on the right. Just as that word does not mean what you think it does, section 230 does not imply what you think it implies. According to eff.org, Section 230 says that “No provider or user of an interactive computer service shall be treated as the publisher or speaker of any information provided by another information content provider.” So in the early days of the internet, if someone posted a death threat on a CompuServe or AOL chatroom or other property, neither company would be liable for it. This relived a major burden, because it is difficult for providers with thousands or more users to moderate all content at all times. However, content moderation is a separate issue and is mutually exclusive from liability–that is the absolution of liability and the discretion to moderate one’s platform (exercise one’s freedom of association) are separate issues and do not conflict. Twitter having a demonstrable bias against conservatives does not conflict with 230.