Martin put out this video about “Why Colleges Are Collapsing,” arguing that certification is a better deal than getting a degree.

Predictions of the collapse of the college/higher-ed ‘bubble’ due to Covid are vastly premature, and possibly wrong.

I predict there will be no mass closures of colleges, no bursting of any bubbles as a consequence of Covid. I also predict there will no cancellation of student loan debt as a consequence of Covid either even though many want it. The GOP is the party of personal responsibility, so if you take out a bunch of debt for a degree and then your classes are cancelled due to the virus but you are still on the line for the loans, ‘tough shit’ as they say; it was your responsibility to know in advance there would a one-in-a-century pandemic. [1] Like the 2008 crisis, those hit hardest by Covid-related job loss are low-income workers, who lack much credentials or skills. This means that there will likely be huge demand for college in the aftermath of the crisis, as millions laid-off employees try to gain the necessary credentials for employment in an increasingly efficient and competitive economy.

The crisis has accelerated the US economy to a more efficient state. Every time unemployment gets too low–such as pre-911, 2006, 2019, etc., and economic efficiency begins to fall–a crisis is suddenly and inexplicably invoked to accelerate efficiency again. The crisis is always short-lived but the economic effects are permanent, and has the effect of accelerating pre-exiting trends. Post-Covid will thus see the college wage premium rise to even new highs in spite of the popularity of online courses. Post-Covid, colleges will make even more money by transitioning to low-overhead online classes while charging even higher tuition, and collecting bailout money to fund endowments. What an awesome deal.

In spite of high tuition, the data shows that even the least lucrative degrees from the lowest ranking of colleges still confer a lifetime earnings premium over non-grads. Martin mentions that the typical grad has $30,000 in debt, which may seem like a lot, but that is roughly the cost of a new car (yet there is much less media protest over a ‘car bubble’ or protests over exorbitant car costs), but unlike a new car, which loses 30-50% of its value after you drive it off the lot, a degree pays for itself in terms of higher inflation-adjusted wages. So although tuition has exceeded inflation, so have college grad wages too, which the media ignores. Real wages for grads have surged, especially since 2008 ,relative to non-grads (and not surprisingly, ‘some college’ is as useless as no college, but you get all the debt of having still attended): 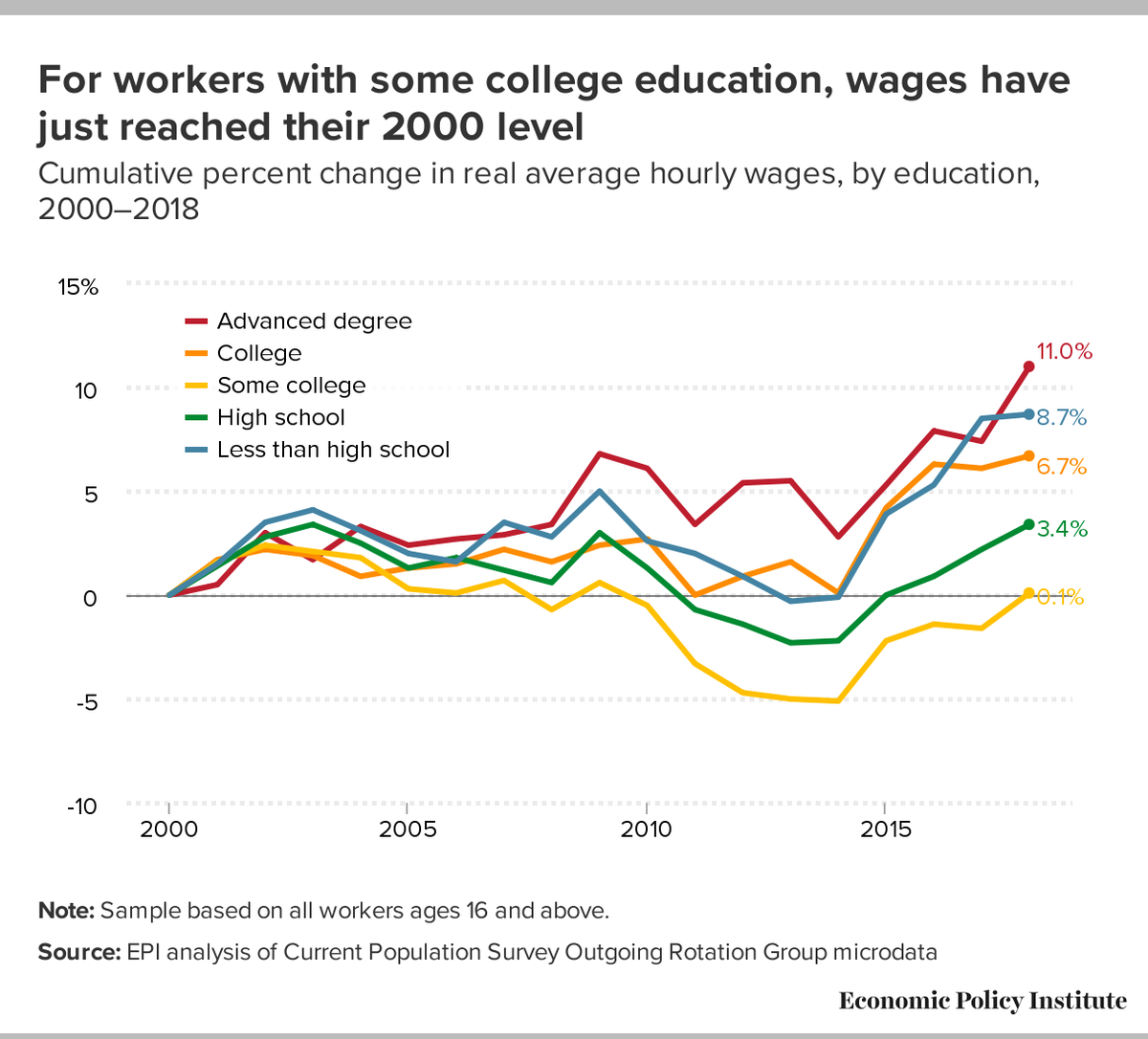 I predict this trend will accelerate due to Covid.

Martin also mentions certification as being a solution. He mention that Google now considers Coursera to be as valid for hiring purposes as a degree. Martin says that if he could redo things, he would not have gotten a degree, but this sounds like hindsight bias. This is indeed true: Google is giving out Coursera scholarships. However, the problem is, the hiring rate is probably very low, way lower than for degree holders. This seems similar to coding bootcamps, which are notorious for overstating their completion, competency, and hiring rates. The nice thing about a college diploma is that all employers consider it a valid credential. Like a form of currency, it is universally accepted and valued everywhere. A B.A. degree will always be a B.A. degree–sure, there is variation in terms of school, major, or GPA—but it is a universally recognized credential. But that 6-week coding bootcamp certificate that cost $10,000? Almost certainly not. Martin also mentions that certificate holders may need to attend additional classes (which means spending more money and time) to keep their skills current, or else it is effectively useless as far as getting a job is concerned. That would be like getting a degree in anthropology and then having to periodicity return to college to learn about the latest developments in anthropology, or else your degree is voided, and you have to pay for these additional courses. Certification does not sound so great now, does it.

[1] Some on the ‘right’ such as Vox Day and Mike Cernovich support student loan forgiveness, but if student loan reform and forgiveness is an issue of superlative importance, the only way you will have any shot of getting it is to vote blue. You will never get it from a republican, ever. It is just one of those things where you have to decide if this single issue is of importance enough to support a candidate for which you otherwise would disagree on every other issue.