It seems like everything has been accelerated. 2020 may go down as one of the most eventual years in recent history, or even the past 50 years.

1. 2020 presidential election , which will probably be the biggest, most contentious, and most costly to date, pitting two over-sized septuagenarian egos against each other, a nation more divided than ever, all while showered with billions of dollars in non-stop political ad spending targeting maybe 15 states.

2. Worse pandemic in possibly 100 years that will probably claim 200k American lives, or about 6x as worse as a typical flu season, and this is WITH all these drastic measures being put in place.

3. Econ crisis , unemployment crisis, quarantines, shutdowns. Records being set in terms of acute job loss. Records set in terms of stimulus spending. The treasury spending trillions at whim and inflation doesn’t even budge despite the insistence by pundits that such spending is not sustainable.

4. Nationwide unrest due to death of George Floyd, possibly the worst unrest since the Rodney King riots.

The last three were compressed into just 4 months: Feb, March, April, and May.

If there is a possible upside to Trump losing, it will be an attenuation of the culture wars, however small. Trump’s actions have created greater reverberations than anything any prior president has done in terms of media coverage, outrage, and hype. It makes Bush and Obama seem tame by comparison.

Trump’s twitter is blowing up. His engagement has gone up 5x from this time last year, I think, in terms of likes, retweets, and comments. Same for Elon Musk, whose Twitter engagement has also surged by 2-5x fold since January due to controversial comments regarding the knockdowns and quarantines, and also hype over the SpaceX Falcon 9 rocket launch.

Everything has been dialed up by 5-10x in terms of the media and outrage from both sides in regard to the virus, the 2020 election, the riots, etc. I have never seen anything like this, even the days following 911 was not as intense as this. It is total pandemonium as far as the culture wars are concerned. It’s like a false vacuum bubble nucleation process expanding in all directions at the speed of light, enveloping and destroying everything in its path. You cannot escape it.

This can be visualized by the graph below (not to scale). 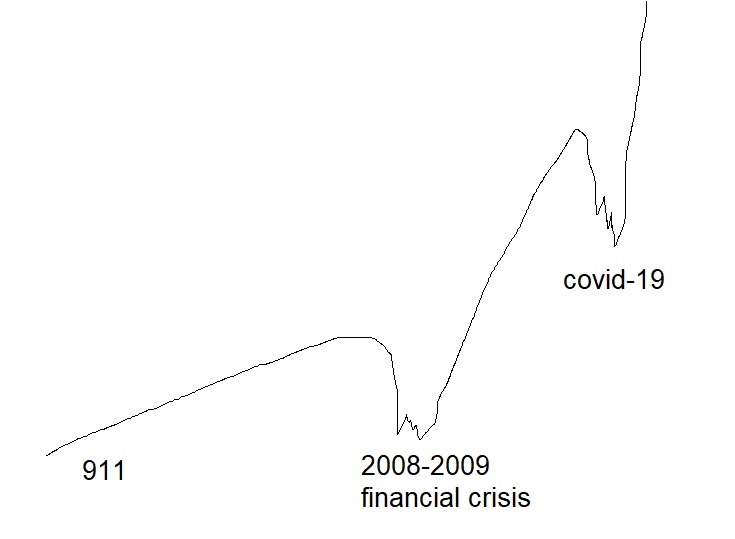 In terms of the economy, billionaire wealth is the highest ever in spite of the virus, due to large multinationals such as Walmart and Amazon posting large gains and taking business from dying smaller retailers. The wealth of tech billionaires of companies such as Google, Amazon, Microsoft, Zoom, Shopify, Netflix, Apple, Facebook, etc.–has also made new highs in spite of the virus. All of the pre-exiting, pre-Covid trends are in place but accelerated: more twitter engagement, more media hype and divisiveness, more outrage in politics, higher tech valuations, more economic efficiency and productivity, higher wage premium between college grads vs. drop-outs, etc.

Does this mean society will collapse as predicted by accelerationist philosophy? No, it is sustainable. Rather than the economy and society collapsing, it is being restructured and reorganized to a more efficient and robust (in terms of the US economy, stock market, wealth creation, capitalism, etc.) yet simultaneously more chaotic (such as these protests and riots) state. It means that elites will continue to split off, forming enclaves within the US and also overseas in New Zealand and Ireland, which are tranquil and safe. The US will continue to split between the tech/creative-elite and everyone else as this acceleration process unfolds.