In regard to the Minnesota riots and Black Lives Matter protests, it’s funny how the rules of social distancing and mask wearing do not apply to the causes that the left cares about. Why isn’t anyone scolding BLM for not practicing social distancing, yet hair salon owners are being arrested. The media completely flipped, from non-stop virus coverage to now non-stop coverage over this death, and also Twitter vs. Trump. Suddenly 100,000 dead and and potentially many more, has been eclipsed by this single death. It just goes to show how much of this virus hysteria was mostly media generated hype. As evidence of this, the stock market has nearly recovered all of its pandemic-related loses. The virus was just the latest media narrative/fad rather than the crisis they portrayed it as, only to be superseded by an even bigger crisis, that being the death of George Floyd.

Trump, in expressing his sympathies, keeps trying to pander to the black vote. It’s not going to work: blacks (with few exceptions) and the left still hate him as much as ever. Trump does however risk alienating white voters. The conservative narrative for the past three years was that Trump had somehow miraculously mended black vs. police relations as shown by a temporary reduction of black unrest compared to the Obama years, but this riot puts to rest that tired talking point.

I somewhat disagree with people like Ramz and Vox, who argue that this has a racial angle, in that diversity is to blame for these riots. The blame goes to the police for not doing anything. I agree with the implication that without blacks, violent crime and unrest in the US would go down, but race is not a good predictor of unrest globally. There are generally three ingredients necessary for unrest: a population or group with deep-seated grievances and possible proclivity (due to cultural and or biological factors) for violence, a trigger, and an inadequate police/govt response. In regard to race, this sort of shit happens all over the world such as Brazil, France, Italy, Greece, Chile, Lebanon, Spain, etc. that have all experienced civil unrest in recent years. It’s not like this is uniquely a black problem. France, in particular, despite being mostly white has considerably more violent unrest on a per-capita and incident basis than the US, and whites in Northern Europe are no strangers to unrest and are liable to protesting on a hair-trigger. Greece had non-stop rioting from 2010-2015. Antifa, which is mostly white, has also committed acts of vandalism although not to the same degree as in Minnesota. Or what about those soccer riots and stampedes. The 2011 England riots were especially bad:

The 2011 England riots began on August 6th, 2011 in Tottenham, London as a response to the murder of Mark Duggan who was killed by police. The protests quickly escalated into violent protests with widespread arson, looting, and vandalism in Tottenham with several police vehicles being destroyed. The riots quickly spread to other cities in England such as Liverpool, Nottingham, and Manchester. By August 11th, the protests had ceased after thousands of arrests by the police with over 1,000 rioters charged with criminal offenses. The riots left five people dead and 186 police officers nursing injuries. The protests forced the British government to look into the factors which may have fuelled the violence with unemployment, police harassment and social exclusion being noted as key contributors.

In regard to crime, Italian Americans, despite being white, invented organized crime in America. Whites in the Old West, all way through the roaring ’20s, robbed stagecoaches and banks with near impunity, outgunning the local sheriffs until the FBI was finally created in 1908, with the necessary firepower, to do something about it. Property crime such as theft is also common in these purportedly high-trust Nordic countries, but also in the UAE despite Islamic law forbidding it. I was at a shopping mall at Dubai once, and one thing that surprised me is that if you have any open shopping bags before entering certain stores, the staff will staple them shut, so evidently Sharia Law and hand amputation is not a good enough deterrent at theft..

From https://en.wikipedia.org/wiki/Crime_in_the_United_States Wiki, this is pretty surprising…was not expecting this:

According to a 2004 study by the Bureau of Justice Statistics, looking at the period from 1981 to 1999, the United States had a lower surveyed residential burglary rate in 1998 than Scotland, England, Canada, the Netherlands, and Australia. The other two countries included in the study, Sweden and Switzerland, had only slightly lower burglary rates. For the first nine years of the study period the same surveys of the public showed only Australia with rates higher than the United States. The authors noted various problems in doing the comparisons including infrequent data points. (The United States performed five surveys from 1995 to 1999 when its rate dipped below Canada’s, while Canada ran a single telephone survey during that period for comparison.)[44] 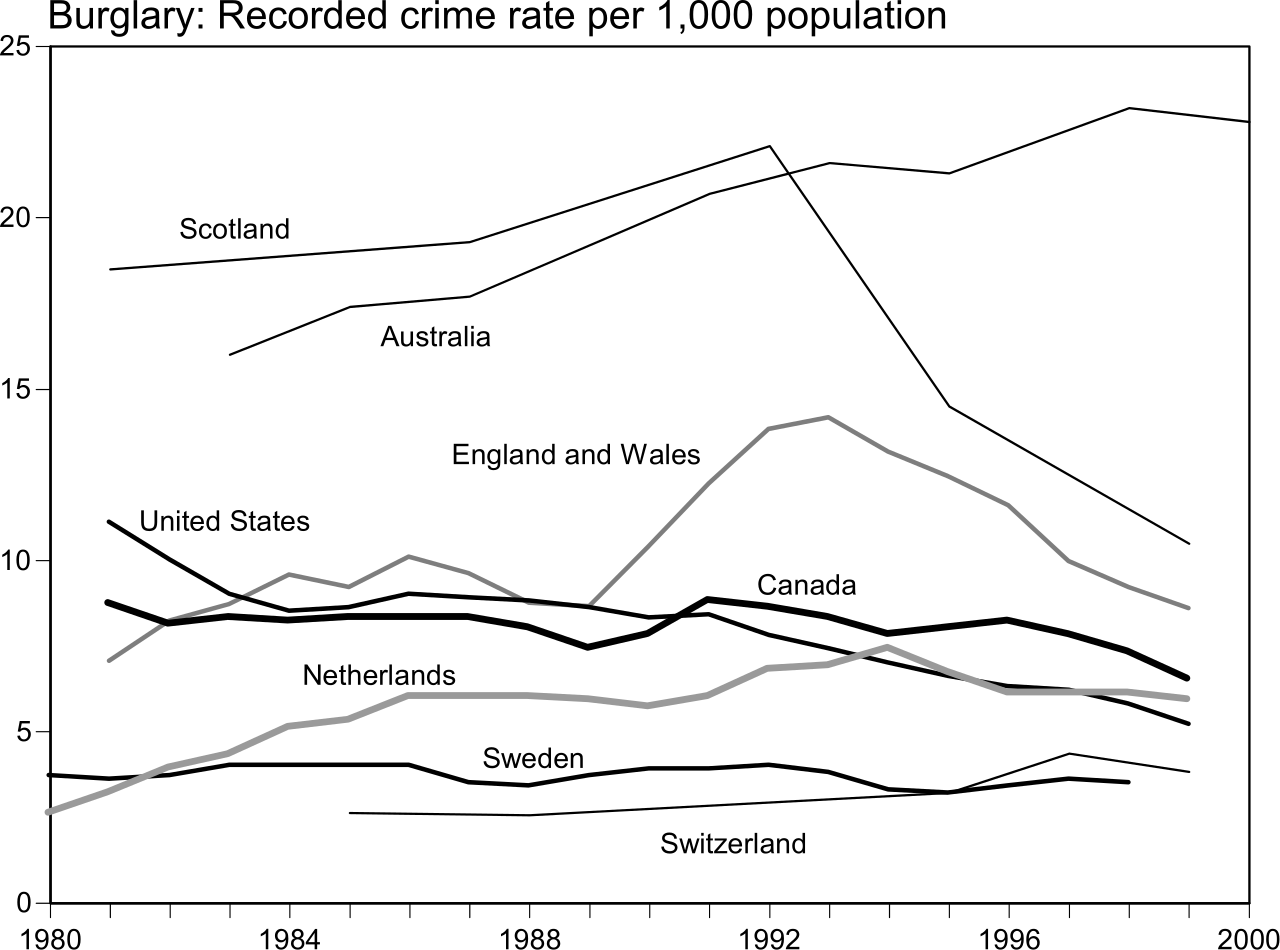 So in spite of a large black population, the US ranks lower or equal to developed countries in terms of property crime, beating by a huge margin mostly-white Scotland. And this was before the recent wave of non-white immigration into Europe, so the crime rates are likely  even higher.

According to Comparisons of Crime in OECD Countries , the US, despite its diversity, ranks much lower than Belgium, France, Portugal, Chile, and the UK in terms of per-capita burglaries and violent crime:

Astonishingly, Sweden has 4x the reported assault rate as the US. 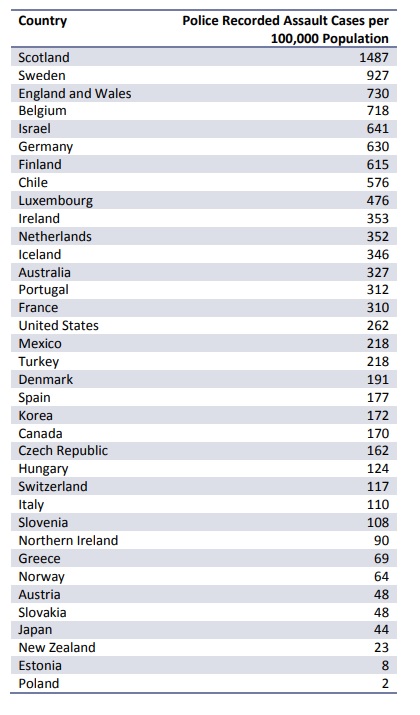 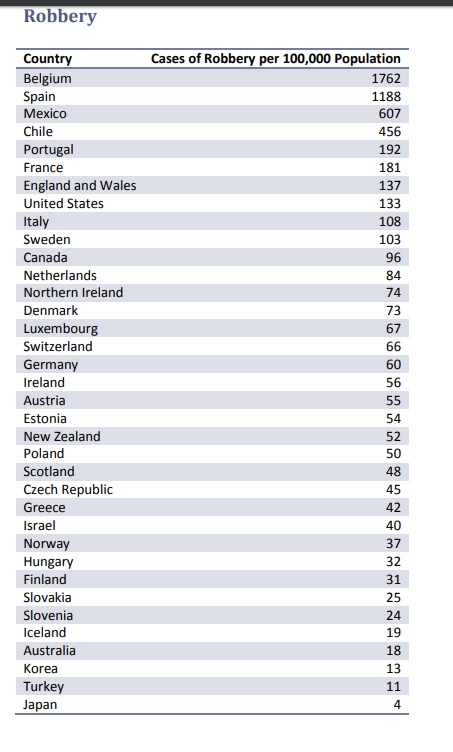 Maybe blacks are likely likely to commit impulsive acts of violence such as looting or homicide whereas non-blacks are more inclined to commit crimes for monetary gain that require planning such as robberies, insurance fraud, or credit card theft.

I think the US is unique in the world in having a sizable Protestant, Anglo-Saxon population that has been culturally conditioned to be compliant and disinclined to crime or unrest, compared to whites elsewhere in the world.