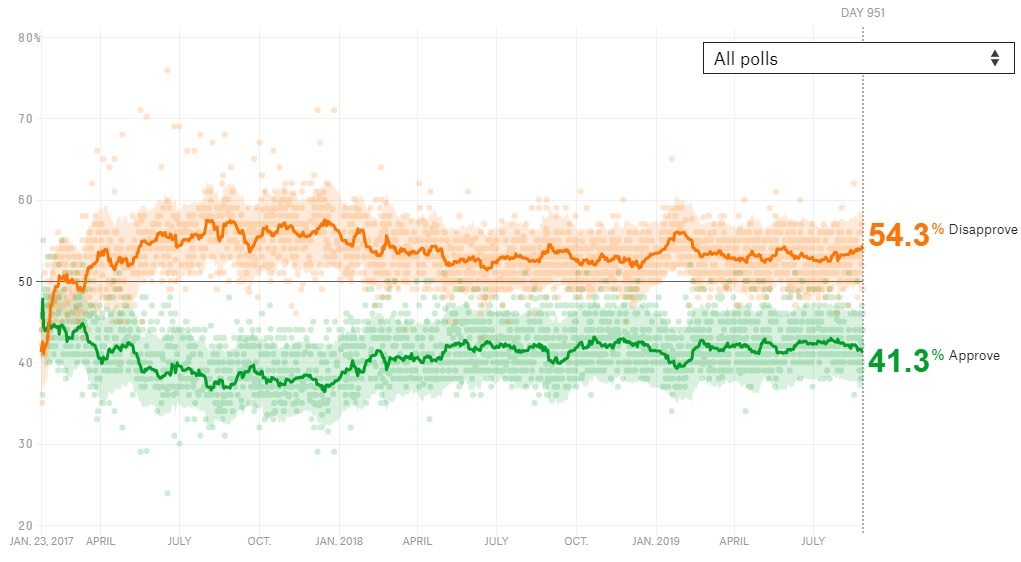 This is indicative of many things: a political climate that is very polarized, with roughly half the country supporting Trump and the other half not, with strong convictions on either side. This trend of increased polarization probably began in the ’90s under Clinton with the rise of cable news and talk radio. As heated and angry as politics may seem now, it was also pretty bad back then too, such as over Hillarycare, abortion, ‘don’t ask don’t tell’, the war on drugs, etc.

Things got worse under Obama and the rise of the Tea party movement, which I think exacerbated the problem. Both sides dug in in their heels, whether it was over Obamacare, immigration, taxes, the threat of socialism that always looms yet never materializes, the debt ceiling, etc. Obama was an especially polarizing president, and this carried over to Trump.

But America has always been divided. Some say it was ‘Reagan country’ in the ’80s, but not really. Although he won by electoral landslides, his disapproval rating hovered around the low 40’s for much of his presidency. Despite the sort of deification of Reagan in recent years, lot of people didn’t like him and still don’t, evidently. Same for Bill Clinton, whose approval rating averaged around mid 50’s despite the media narrative of how popular he was (and still is). Interestingly, H.W. Bush, despite only serving a single term and being considered an unpopular and forgettable president, had strong approval ratings for much of his first term, only for it to plummet in the final year due to recession.

People’s minds are made up early and tend to remain fixed. Those who supported Trump in 2015, when he announced his candidacy, likely still do; those do who didn’t, still don’t (except for most House republicans, who have warmed up to Trump). But this was not the case with G.W. Bush, H.W. Bush, and Carter, all of whom saw large reversals in popularity. This probably because none of them were able to cultivate the sort of cult of personality and following that Clinton, Reagan, Obama, and Trump were able to. Reagan and Clinton survived numerous scandals, with their favorability remaining intact. Clinton’s approval rating actually spiked during his impeachment proceedings, peaking at just over 70%.

Given how tight things are and how people’s minds tend to be fixed, this makes undecided voters in swing states more important than ever. Both the left-wing and right-wing media are spending billions of dollars, with more to be spent in 2020, to convert these handful of invaluable voters. It’s estimated that Trump won by a margin as small as 100,000 people spread out over several states. So that is roughly $10,000-20,000 spent by political groups, campaigns, media, etc. per voter.

As shown by the above graph, neither side is capable of moving the needle much despite millions of social media postings, media coverage, and billions of dollars in media spending. Fox news has Tucker, YouTube has has Shapiro, Twitter has Candace Owens, and CNN has Lemon, and they are locked in this culture war tug-of-war stalemate. On twitter, in the comments, such as when either AOC of Trump tweets, is like watching two warring armies of termites or ants build their mounds, which are washed over and subsequently rebuilt when new tweets are made. It just seems like a wholly unproductive use of time, for either side. Imagine how many tens of thousands of man hours are spent doing this, that could be otherwise spent on more productive stuff. What if the billions of dollars spent trying to convert undecided voters was spent on other things. If both sides mutually agreed to a social media truce, neither side would have anything to lose given how neither side is winning, yet would make the internet a much nicer and peaceful place in the process, and at the individual level free up a lot of time that could be spent on more edifying stuff.