A few days ago he re-tweeted yet another Tulsi tweet: 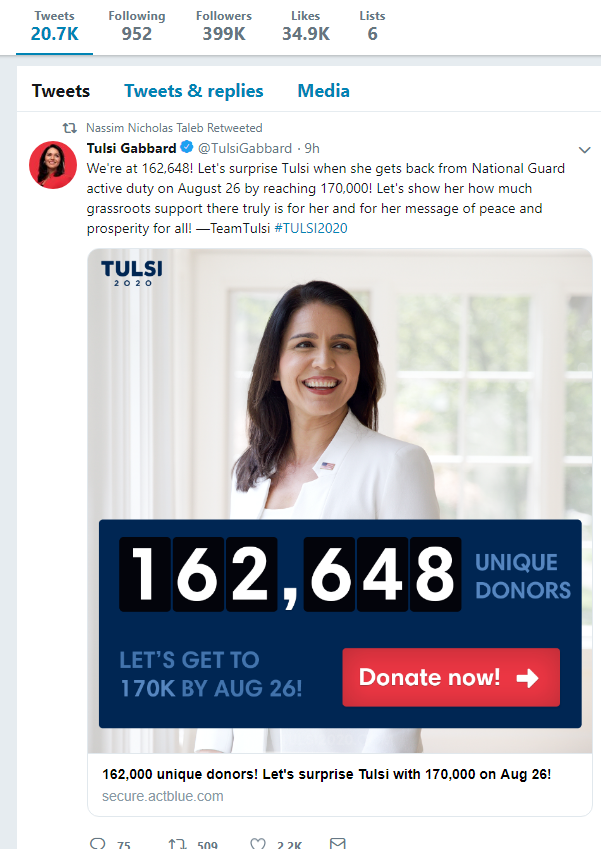 This is definitive proof that Taleb is a social justice warrior, which I have suspected for years. This is not 4-d chess, nor is he doing this ironically, but rather this is an unequivocal endorsement of the left. Taleb likely never supported Trump in 2015-2017, and now his true political colors are showing through his actions, whether it’s his attacks on IQ and libeling of Charles Murray, Claire Lehmann, and Stefan Molyneux, his attacks on nationalism, or his re-tweeting left-wing propaganda. He was never on ‘our’ side.

He also tweeted this: 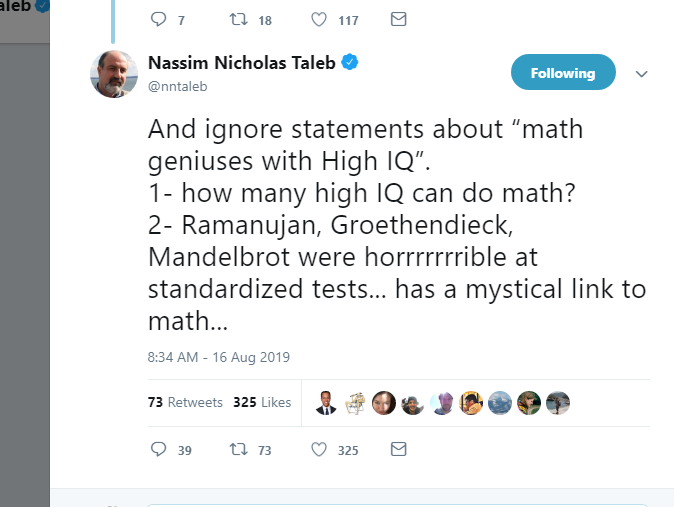 Obviously, not all high-IQ people are good at math, but virtually all mathematicians are high-IQ and scored really high on the SATs, particularly the math portion, which can be considered a type of exam. This subtlety is apparently lost on Taleb despite many people explaining it to him. He really hopes his few remaining fans on Twitter that he has yet to block will not notice. Just like SJW-left, Taleb will block or publicly insult anyone who challenges him on Twitter, and he ascribes racist motives to factual disagreement by his intellectual opponents. He is doing what the Middlebury protesters did to Charles Murray, but behind a faux veneer of libertarianism (he is not a libertarian) and intellectualism (he is neither an intellectual, nor is he that smart).

Regarding the three mathematicians listed in that tweet, Nassim Taleb is a compulsive bullshitter and cannot stop making misconstructions in order to advance his anti-IQ , left-wing agenda.

First, regarding Mandelbrot, according to Wiki “In 1944, Mandelbrot returned to Paris, studied at the Lycée du Parc in Lyon, and in 1945 to 1947 attended the École Polytechnique, where he studied under Gaston Julia and Paul Lévy. From 1947 to 1949 he studied at California Institute of Technology, where he earned a master’s degree in aeronautics.[2] Returning to France, he obtained his PhD degree in Mathematical Sciences at the University of Paris in 1952.[13]”

The École Polytechnique “is the most prestigious engineering Grande Ecole in France.” Admission is heavily based on exams, based on my reading of the biography of Michael Foucault, who also attended. “The admissions exams: a second selection based on results of written and oral exams in maths, physics and a general scientific knowledge.” So this pretty much debunks the claim made by Taleb that Mandelbrot was ‘horrrrrible’ at exams (and apparently Taleb is horrrrrible at spelling).

Regarding Ramanujan, another misconstruction. As someone who has studied Ramanujan and his his work on infinite series, I immediately knew Taleb was parroting an old falsehood: Although Ramanujan flunked most of his exams, he passed his math ones with flying colors. This is confirmed by his biographers: ‘Ranganathan states that he found Ramanujan’s mark in one of those volumes and saw that he had “really scored a very high percentage of marks in mathematics. His failure was due to poor marks in the other subjects. This is the true story.”’

Regarding Grothendieck, wiki says “After the war, the young Grothendieck studied mathematics in France, initially at the University of Montpellier where he did not initially perform well, failing such classes as astronomy,” but this is not the same as him failing important mathematics exams. If he did fail, it was because he attended a class that was initially too advanced for him, but he rapidly made progress and became a leading expert. To have been awarded his PHD, which he was in 1953, he would have had to pass qualifying exams, which pretty much refutes Taleb’s claim anyway. So that is strike three.