This is pretty fascinating:

The book concerns education in Australia for exceptionally gifted children. Terence Tao, who was born in Australia but since 1999 has been math professor at UCLA, is mentioned in the book.

And the related table of reading and talking ages for exceptionally gifted children (IQs>160): 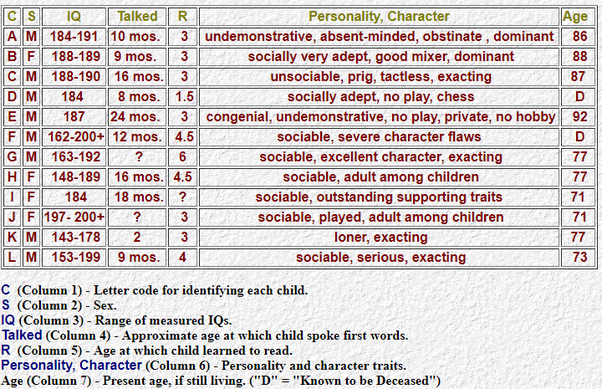 (I have no idea which study this table came from, but given how old it is, these are ratio (mental age) scores, which was how IQ was commonly measured for the first half of the 20th century, not normal scores, meaning that as discussed here, purported IQs are not as rare as normal scores. I think Terrance Tao, for example has a legit 1-in-a-million IQ, but some of these subjects may only be 1-ten-thousand or so rarity despite having purported IQs in the 160-200 range.)

If anyone is still convinced that individual differences in IQ and cognitive tasks, such as reading and speaking, are wholly attributable to environment (the so-called ‘blank slate’), the above case studies of profoundly gifted children, should disabuse such notions. IQ is almost entirely a product of genes rather than environment. No amount of parental intervention can produce these results, such as speaking and reading at such an exceptionally young age. Given that all parents speak and read to their children, and that children under the age of two two three are obviously much less influenced by environmental factors compared to as adults, it is plausible only IQ or some other innate/biological trait can account for why some children demonstrate acquisition of superior verbal skills months or even years before the general population average. It’s not like 18-month-olds have 10,000 hours of practice or special prep schools. Just as IQ follows a normal distribution, so does reading and speaking age.

It’s not that surprising, I think, that IQ on the extreme right side of the bell curve is large genetic, but a more applicable and useful question is, can people with average IQs be be trained to learn skills that may come more easily for high-IQ people. Given that there seems to be a point of diminishing returns to IQ vs. adult ability [1], this may allow people of only above IQS to catch up even if as children they lag considerably.

[1] So for example, a 5-year-old with a mental age converted IQ of 200 reading at a 10-year-old level, is impressive and rare, but to say that as a 20-year-old he reads at a 40-year-old level is a meaningless statement. Anything beyond 20-years-old or so, is simply an ‘adult reading level,’ although high IQ people may read faster, can read more difficult texts, and retain more of what they read, though.