This is the most shared story by far for the day: College Admissions Scandal: Actresses, Business Leaders and Other Wealthy Parents Charged.

I saw five blogs and a whole bunch of Reddit subs posting about it, which way more than even Trump-related stuff. The fact that parents are willing to part with such large sums of money for a shot at having their child admitted to an elite college, speaks to the value of these institutions. Not educational value, but in terms of connections. This is obvious.

Joe Bonavolonta, special agent in charge of the FBI Boston Field Office, said 300 special agents fanned out across the country early Tuesday and arrested 38 people. He said seven others were working to surrender to authorities and one is being actively pursued.

They are not messing around. Such coordinated arrests on such a large scale are usually reserved for massive , egregious frauds and criminal matters , such as drug rings and underage pornography. It reminds me of the controversy over steroids in Major League Baseball many years ago, in that the response seems disproportional to the harm done. It makes me wonder if the FBI is flexing its muscle on low-stakes cases to create the illusion of being effective but ignoring much bigger abuses, such as companies knowingly hiring undocumented workers (which is technically illegal but seldom enforced).

A common response is that such scandals are an affront to the meritocracy, but in a pure meritocracy, instead of one’s success being so heavily dependent on being admitted to an elite school that owes its prestige to artificial scarcity, it would be based on actual demonstrable merit, without artificial scarcity. The fact that these schools confer such a huge boost in terms of status and earnings potential that parents are willing to spend so much money to get their kids is, shows that the meritocracy may be broken.

Sitting very still and wearing a dark suit, he described how he arranged for students’ SAT and ACT results to be falsified by sending them to take the exams in Houston or Los Angeles, where he had bribed test administrators. He described the students as believing they were taking the tests legitimately, but said that his test proctor would correct their answers afterward. Mr. Singer said he would tell the proctor the score he wanted the student to get, and he would achieve that score exactly.

I see cheating on the SAT as a separate problem than bribing universities, and probably much more widespread than revealed by this scandal. Cheating on the SAT debases one of the last vestiges of the meritocracy.

I have been seeing this meme lately that anti-antisemitism and criticism of Israel has become increasingly tolerated in the US, as evidenced by the rise of Ilhan Omar. Ross Douthat writes:

This history supplies one way to understand the stakes in the controversy over Ilhan Omar, the Muslim congresswoman who keeps using anti-Semitic clichés in her criticisms of the American-Israeli relationship. The part of the American left that’s defending her, or at least mitigating her offense and accusing her conservative critics of bad faith, doesn’t see itself as defending Jew-hatred, and since many of those defenders are Jewish — including the arguable front-runner for the Democratic nomination, Bernie Sanders — it’s reasonable to take them at their word.

In America, being accused of antisemitism today packs as much of a punch as it always has. Society has not become inured to it. The reason why Omar can get away with it is because her jobs is guaranteed, being that she is in an elected position of power that cannot be revoked unless she breaks the law or is voted out.

Josh Brown reflects on the 10-year anniversary of the post-2009 bull market, which is the longest ever.

My forecast today is the same as it always was, even as far back as 2011: the market will keep going up. In 2014, I was one of a handful of people who correctly predicted the market would keep going up and there would be no recession. Predicting this stuff and understanding how things work is not that hard, whether it’s stocks, the economy, foreign markets, forex, or crypto currency. [1] Interest rates are low and only rising very gradually, exports are strong, taxes and inflation are both low, consumer speeding is strong, and as shown below, companies are making tons of money: 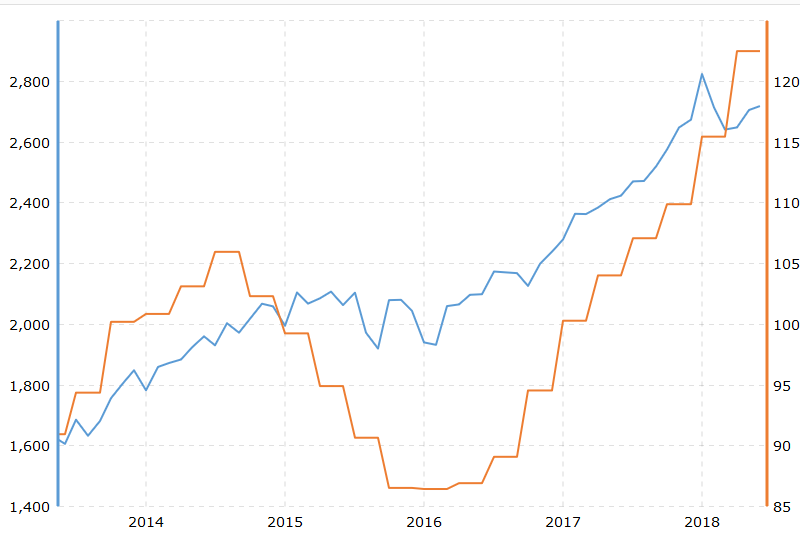 Earnings (in orange) have increased 40% since mid-2013, and prices (in blue) are up 70%. Although stocks are not cheap by historical standards, they are not that that expensive either. I can easily see the S&P 500 rising 15%/year for the next decade, and no recession. Just as so few people in 2009 foresaw such a huge recovery and expansion, few expect it to go on for another decade, but count me in. This is part of the transition to a type-1 civilization in which the stock market and economy becomes so fine-tuned that business cycles may become a thing of the past.

[1] Out of all of finance and economics forecasts for the past five years, I was only wrong once, which was Snapchat. That is like a 95% track record. There are always clues if you pay attention, but analyzing a lot of companies is a lot of work, but if one pays attention , the clues are easy to pick up, especially in conference calls. Many months ago I said to short Ethereum when it was at 200 (now at 135). I listened to a few conference calls and there was no energy and no enthusiasm and a poor group dynamic, and it seemed like there were problems that would later reveal themselves, which they have. There is always forewarning in these situations. I think Ethereum is going to single digits soon and has no future.