These are just anecdotes, but the data tell a similar story. In 2005, Florida’s Broward County began administering a test to all second graders to identify gifted and talented students. The number of black and Hispanic students in those classes both promptly tripled, and those minority students performed very well in the gifted programs. When the testing regimen was ended in 2010 due to budget cuts, the racial disparities re-emerged. Broward’s episode suggests that American institutions are bad at identifying talent, especially among minority students.

Broward’s experience is far from unique. Looking at 11 states that started requiring (and paying for) high school students to take the ACT or SAT tests since 2001, economist Joshua Hyman found that large numbers of poor students scored as college-ready who otherwise would not even have taken the tests. This hidden talent increased the pool of college-ready poor students by 50 percent. Other papers found that mandatory testing increased college enrollment rates among disadvantaged students.

I think an area where I and at least some reasonable liberals can find agreement on is gifted education. Noah Smith is a liberal, yet I agree with him here.

As I discuss in Reviving the American Dream with ‘Purple Policies (and here and here), the fact that the far-left side of the Bell Curve (IQ < 80) gets far more public education funding than the far-right (IQ > 120 ), despite the later contributing far more to society, as well both extreme scores being equally represented in the general population, is an example of a sub-optimal allocation of resources. One can argue that the less intelligent need more help, but from a ROI perspective, a dollar spent on remedial class does not go as far as dollar spent on enrichment. Furthermore, the trend of dumbing-down the SAT hurts the gifted poor and middle class, by making it hard to identify exceptional talent with such tests [earlier versions of the SAT are harder than recent versions]. But the obvious problem is more testing will further highlight racial disparities in achievement. More gifted funding will mean more gifted minorities getting help yet at the same time more inequality.

But regarding disparities, what about the Broward County study Noah cites?
Unfortunately, Noah undermines his credibly a bit by omitting a key detail, which is that in recent years gifted programs are relying less on IQ testing for admission, instead relying more on a more holistic approach, and in other instances lowering the minimum IQ for enrollment for gifted programs from 130 to 116.

For decades, the state of Florida has tried to increase access to gifted education. Broward is one of many Florida counties that maintains two sets of standards for gifted students. Most children have to score at least 130 on the state-mandated IQ test — roughly in the top five percent — to qualify. But children still learning English, and those from low-income households, only have to score 116.

Of the 300 additional gifted students identified at the height of the screening program, about 240 were low-income or English-learning children who scored at least 116 on the IQ test. Among those 240 children from disadvantaged backgrounds, about one-fifth showed exceedingly high IQ scores, over 130. All of these genius-level children, according to Card and Giuliano, would not have been caught by the old system of recommendations.

For the Adams 1-Mapleton, CO gifted program, in which blacks are only slightly underrepresented relative to population, IQ testing is not required.

From the study Underrepresentation of Minorities in Gifted and Talented Programs: A Content Analysis of Five District Program Plans:

Defining giftedness influences assessment processes, portability, screening, and evaluation methods. Because gifted programming is not a federal mandate, politicians,
researchers, and practitioners at national, state, and local levels have created definitions of giftedness. A conservative view relies heavily on standardized testing and strictly intellectual definitions of intelligence. An example of this conservative view is Terman’s definition “the top 1 percent level in general intellectual ability as measured by the Stanford-Binet Intelligence Scale or a comparable instrument” (Renzulli, 1986, p. 258). This type of definition makes it difficult for students who do not have the specific IQ score to be identified as gifted (Renzulli, 2002). Most researchers and policy makers lean towards a more liberal type of definition (Renzulli, 2002). NAGC’s definition of gifted represents a more liberal view because it includes the idea of multiple intelligences. The definition is as follows:

Blacks are almost universally underrepresented when adjusting for population versus Whites and Asians for gifted programs when IQ testing is used and the threshold is not lowered. For Douglas County, CO, blacks are 3% of the student body but have just .3% representation in gifted enrollment. 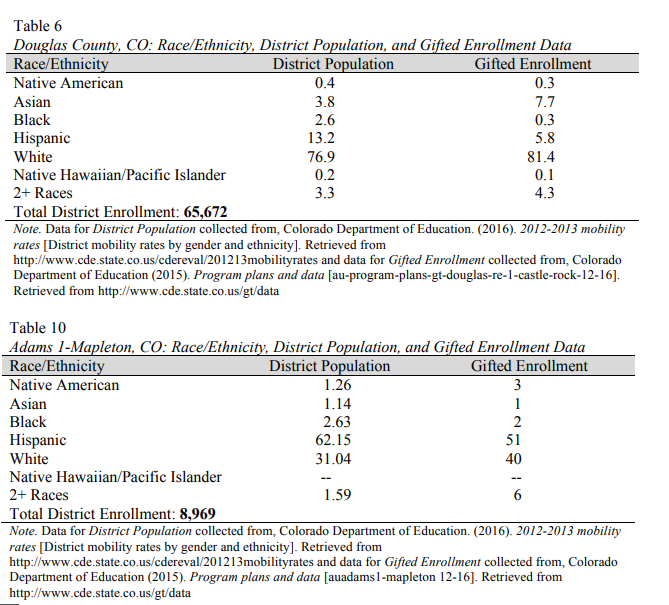 It seems overly optimistic to assume more aggressive screening will ameliorate disparities if there is an underlying biological cause such as IQ, without having to lower standards or accept inequality. The irony is, attempts to make gifted education more fair by lowering standards is unfair to those who meet the standards, and reduces the efficacy of the program, hurting the very students it is intended to benefit. Promoting opportunity while at the same time hoping to maintain equality of outcomes and representation, are incompatible.