It links to the article The Next Financial Calamity Is Coming. Here’s What to Watch.

This chart immediately stands out: 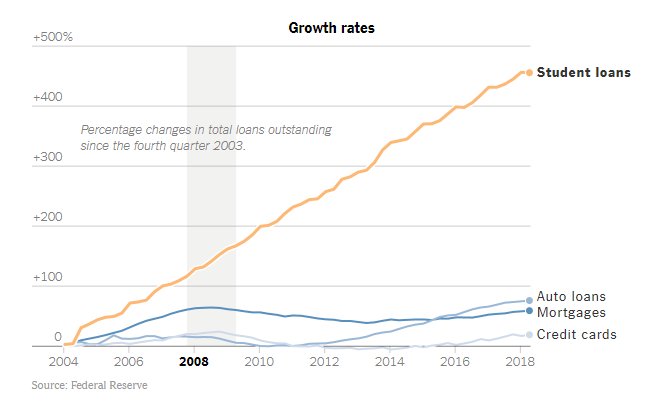 One may mistakenly believe that this is total debt outstanding, but the faint description actually says it is the number of loans. So in theory it could be a bunch of $1 student loans. Who knows. But the New York Times, intentionally, chooses a chart that appears to show the most dramatic change, but it is actually not that important because it tracks the percentage change of the number of loans issued instead of the total dollar amount, which is more important.

The top chart shows “total student loans outstanding,” but unlike the chart above, they don’t compare it to mortgage, credit card, or auto loans. How come? Why is that data omitted? Probably because it would not seem so dramatic if put in the context of other types of debt.

As it turns out, although student loan debt has seen the greatest percentage increase since 2003 of all types of debt, relative to mortgage debt, it is still very small:

It would appear that student loan debt started out from an abnormally very low amount in 2003 and then caught up with credit card and auto debt.

One of the major reasons why there is so much student loan debt is that, unlike credit card and auto loans, the lending requirements are much less stringent, because the federal government, not the private sector, is backing the vast majority of student loans.

But this does not explain why student loan debt has increased so much in recent years, especially after 2008. There are two ways of looking at this: college is a bubble (conventional wisdom) or that college was/is undervalued in spite of the high tuition and debt. The second possibly deserves more consideration and can explain to some degree why the student loan ‘bubble’ refuses to pop despite that thousands of predictions by the media that it should. My take is, we’re seeing this sudden huge upsurge in loans and debt due to people taking advantage of the higher wages and lower unemployment a college degree bestows, rather than, say, taking out loans for electronics, a home, or a new car, which (as I discuss here) loses value, unlike a degree, which gains value due to higher real wages. Unlike credit card debt, mortgage debt, or auto debt, a degree cannot be repossessed, and the rates are much more favorable than a car loan or a credit card.

Although student loans typically cannot be discharged in bankruptcy, there are tons of deferment, forgiveness, and payment plans. Given the low interest rates, deferment programs, immunity to repossession, and higher wages–student loan debt, compared to other types of debt, is a ‘good deal’. So it’s understandable why there is so much demand for it.

As more and more employers require a degree and due to an increasingly competitive labor market, college becomes a better deal. The obvious downside is credentialism, because degrees are required for jobs that don’t necessitate college. But it may have the positive unexpected benefit of more competent employees and increased productivity (because a degree screens for above-average IQ, and IQ is strongly correlated with job performance). Thus, employers and consumers benefit. However, this is bad for those who are not smart enough to get a degree, which is a lot of people if the average IQ of a college graduate is 110 [although I’m not entirely sure about this statistic which is attributed to Charles Murray and I have to do more research], and for those who graduate with too much debt and are unable to find a decent job.

Another problem is, the education-industrial-complex is dependent on these loans. These loans are effectively a form of stimulus that adds to consumer spending and goes into GDP, except instead of a fighter jet or an aircraft carrier, it’s education. So cutting off loans would mean cutting off a source of economic growth and employment. Limiting federal college loans to only applicants with IQs above 120 or so would significantly reduce the number of drop-outs, and further limiting loans to only STEM majors would further boost the ROI, but the odds of anything like that happening are pretty much zero. This is why any practical solution to the student loan ‘crisis’ is doomed to fail, because there is too much money and jobs at stake.