Usually the news cycle is slow, especially around the holidays, but there is a ton of stuff going on.

Those who possess the devices, which make it easier to fire rounds from a semi-automatic weapon by harnessing the gun’s recoil to “bump” the trigger faster, will have 90 days to turn in or otherwise destroy them from the date that the final rule is published in the federal register — likely this Friday — according to senior DOJ officials.

Not a smart move. Trump is already getting enough criticism from the ‘right’ for not building the wall, and the last thing he needs is to alienate his core NRA constituency. From what I have heard, bump stocks are not even that effective because they significantly impair accuracy.

2. Ann is wrong regarding prison reform:

Let's just hope Van Jones votes for Trump to make up for the millions of deplorables he's lost with this bill. https://t.co/y5HzpEURVb

In invoking Scott Adams, the prison reform bill is a ‘win’ for Trump because although some on the right oppose it, it’s a much-needed legislative accomplishment and it helps him win moderates and blacks. It shows a compassionate side to Trump, much like how he granted clemency to Alice Marie Johnson. Also, the bill the hardly a ‘get out of jail’ card, but rather reduces some sentences from ‘life’ to 25 years, and according to Vox, even if the bill passes, its effect on mass incarceration will be relatively small.

3. Facebook is in the news again for privacy concerns. As Facebook Raised a Privacy Wall, It Carved an Opening for Tech Giants: Internal documents show that the social network gave Microsoft, Amazon, Spotify and others far greater access to people’s data than it has disclosed

4. What Happens When Facebook Goes the Way of Myspace?

For years, going as far back as 2008, pundits have been comparing Facebook to Myspace or have called Facebook a fad. And they keep being wrong. Myspace is a terrible website that at its peak was hardly usable, full of of spam and browser-crashing CSS layouts and was not even profitable. Facebook is superior to MySpace in every way, and generates billions of dollars of profit a quarter. People said the same thing about TV, personal computers, and the iPhone. “Who is going to spend $700 on a phone?” Apparently a lot of people. Facebook’s longevity is attributable to the fact that 2 billion people use it, versus only 50 million for Myspace at its 2007 peak. This means in order to connect with anyone, you need Facebook, because that is where everyone is.

The S&P 500 is now 15% off its September 2018 highs. Such corrections are normal and not a cause for concern. Remain long. Compared to bull markets, bear markets and recessions tend to be brief and shallow: 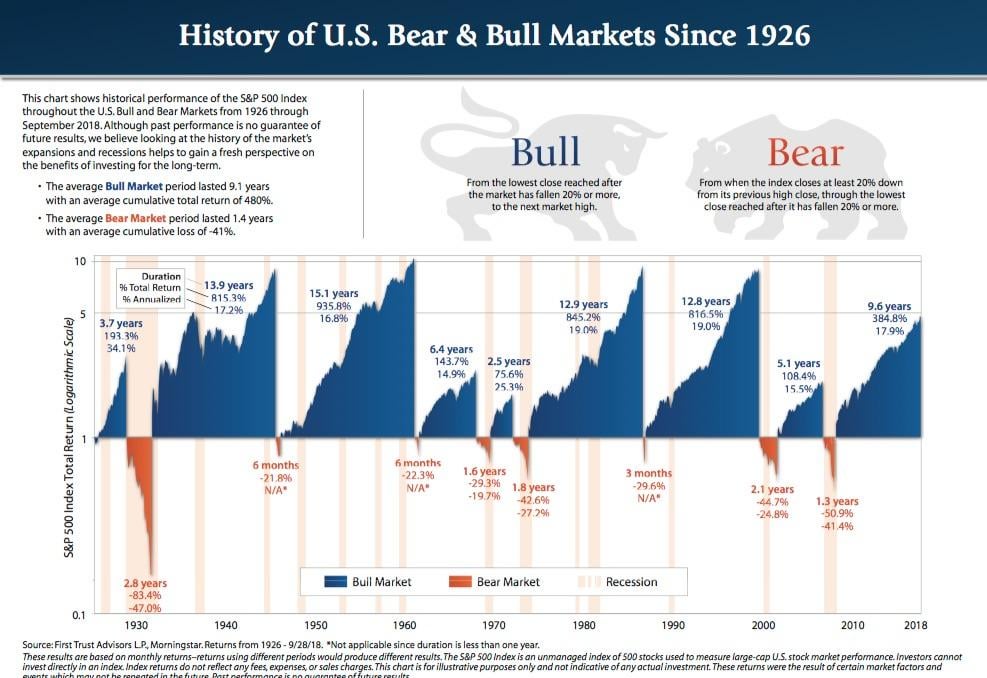 The left is hoping for a recession and bear market in time for 2020 election. Not gonna happen. Buyers will step in and prevent the market from falling the 20% required for a bear market by the official definition.

Nothing has been passed yet. Have no idea what will happen, but any government shutdown will be brief, as they always are. Trump may compromise by appropriating funding for “border security” instead of specifically a wall. Even if there is funding, that’s no guarantee a wall will be built. It’s likely that during his reelection campaign Trump will promise to use the funding for a wall if reelected. In the eyes of most voters, Trump securing funding will be a win even if the wall is not built or if the wall resembles a short barricade or fence.