A year ago Ann Coulter, Vox Day, and James Woods predicted that if Trump didn’t build the wall, his popularity would fall and he would likely not be reelected.

Bannon is correct, but he is only stating the obvious. I have been saying this since before the Inauguration. To ensure reelection, Donald Trump needs to do one thing, and one thing only: BUILD THE WALL.

Everything else is irrelevant in comparison. Build the Wall and win handsomely, fail to build it and risk losing.

James Woods made a similar prediction in April 2018.

However, as I wrote on November 2017, Trump is focusing more on the economy, the stock market, defense, and homeland security, because those are the issues that voters care the most about and where Trump can demonstrate the most progress. He can point to the multi-decade low unemployment rate as evidence of the success of his administration. Furthermore, due to political inertia and logistical problems, I predicted the wall would not be built, and that Trump failing on his campaign promise to build the wall would not hurt his popularity or reelection hopes.

The economy still matters the most to voters:

But the reason for being elected is not the same as being reelected. Provided the country isn’t in recession, reelection is almost always easier than being elected. What one has to keep in mind, as discussed earlier, is that politics is tribal/identity first and issues second. Because identity and signaling play such a large role in politics, even more so than issues, Trump’s failure to pass legislation won’t hurt him much among his ‘base’, but pundits such as Derb and Ann may be annoyed. Symbolic gestures such as Trump’s comments about the NFL or Pence walking out of a football game carry more weight than policy.

Trump keeps talking about the stock market making new highs, tax cuts, ‘defeating ISIS and terror’, and how strong the economy is–much more so than immigration and walls–and this is a good strategy in terms of reelection (even if the far-right wish he focus on immigration and disengage in interventionism), because voters’ perceptions of the economy are important. The economy, terrorism, and foreign policy consistently rank among top issues for voters, not immigration. Among Trump voters, the economy and terrorism edges out immigration by 11% and 10%, respectively:

So, a year later, was I right? The evidence suggests I was. No wall or even a blueprint, yet Trump’s approval rating is at 42.5%–a gain of 4% from a year ago: 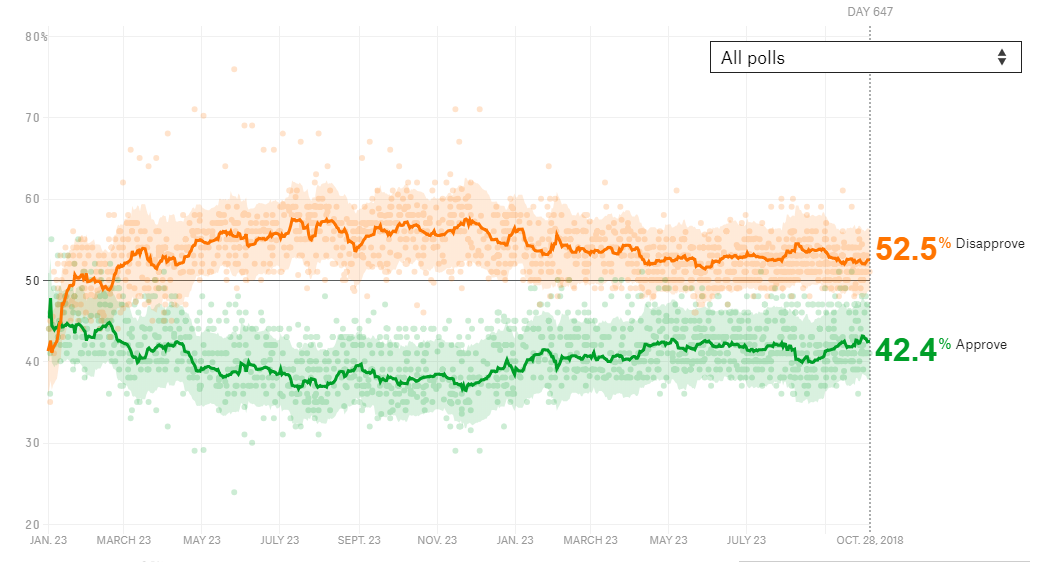