Anti-IQ articles tend to be of dubious quality. A recent article from Nauseous magazine Your IQ Matters Less Than You Think, which went viral, is no exception. I am sharing this only because it was so viral and generated some interesting discussion.

Regarding the apparent failure of the famous Terman study to produce ‘unambiguous exemplars of genius,’ the author writes:

Now comes the bad news: None of them grew up to become what many people would consider unambiguous exemplars of genius. Their extraordinary intelligence was channeled into somewhat more ordinary endeavors as professors, doctors, lawyers, scientists, engineers, and other professionals. Two Termites actually became distinguished professors at Stanford University, eventually taking over the longitudinal study that included themselves as participants. Their names are Robert R. Sears and Lee Cronbach—and nowhere are they as well-known as Ivan Pavlov, Sigmund Freud, or Jean Piaget, three obvious geniuses in the history of psychology.

The goal of the Terman study was not to find future Nobel Prize winners, but to ‘examine the development and characteristics of gifted children into adulthood.’ By many quantifiable metrics, Terman’s subjects were more successful than controls. The average income of Terman’s subjects in 1955 was an impressive $33,000 compared to a national average of $5,000.

From the post The Bell Curve is becoming reality, part 2:

Here you can see the obvious income gap: 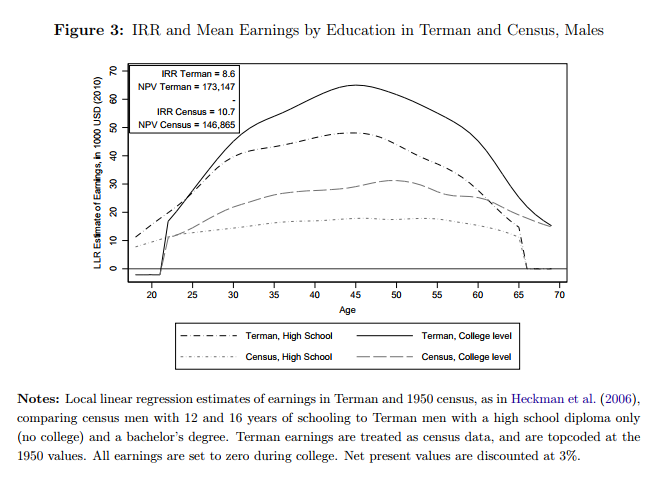 In most dictionaries, the entry for “genius” provides multiple definitions. And getting a score of 140 on an IQ test is not the only one. Here’s another also given by the American Heritage Dictionary: “Native intellectual power of an exalted type, such as is attributed to those who are esteemed greatest in any department of art, speculation, or practice; instinctive and extraordinary capacity for imaginative creation, original thought, invention, or discovery.” That definition definitely fits the top creators in Cox’s 301, but it fails to apply to any of Terman’s 1,500-plus Termites. If you’re smart enough to score 140 or better on an IQ test, then all by all means go that route. Given that you can take this test when you’re only 2 years old, this may be the best choice if doable. A 2-year-old doing what 3-year-olds can do is not that difficult. You can get it over with while still a toddler and then spend the rest of your life basking in the glory of certified geniushood.

What the author is describing are the limitations of childhood ratio IQ scores, which as anyone who knows anything about IQ can attest, are less accurate in adulthood than standard deviation tests. This does not invalidate IQ, but rather shows the possible pitfalls of extrapolating a childhood ratio score to adulthood. Similar to what Nassim Taleb (another vocal opponent of IQ and HBD) does, the author rehashes old, tired arguments to refute what the experts have known all along, yet presents this information as ‘new’ and hitherto unknown, when it’s not.

This does not make ratio scores useless, but can explain why, perhaps, more Terman subjects did not become ‘super-achievers.’ A score of 140 on a modern test is more impressive and more indicative of high intelligence than a score of 140 on an early 1900’s ratio test. I discuss this in more detail in Studies of exceedingly high IQs. A 1950’s study of >180 IQ subjects (although I cannot find the link to the study’; I think it was in Google books) found that by adulthood when retested they had ‘regressed’ from one-in-a-million IQ rarity (180) to ‘only’ 1-1000 (145-150). They did not become less intelligent, but very high childhood ratio scores regress to less impressive-but-still-high normed scores by adulthood. Due to the limitations of sample size and number of test questions, modern IQ tests do not reliably measure IQs above 3 standard deviations (145).

The story goes from bad to worse. Of the many rejects—the children with tested IQs not high enough to make it into the Terman sample—at least two attained higher levels of acclaim than those who had the “test smarts” to become Termites. Here are their stories:

The fact Luis W. Alvarez and Shockley missed the cutoff by a few points but were so successful, affirms the link between high IQ and success, because they came so close. It’s not like they only had 1Qs of 100. Because these exceptions are used so often to ‘discredit’ IQ (and also Richard Feynamn, who reportedly ‘only’ scored 123 on a childhood IQ test), rather then refuting the rule, only prove it. And in the aggregate, the correlation between high IQ and scientific talent holds, in spite of outliers. As shown below, SAT-Math scores at age 13 predict adult outcomes of academic success: 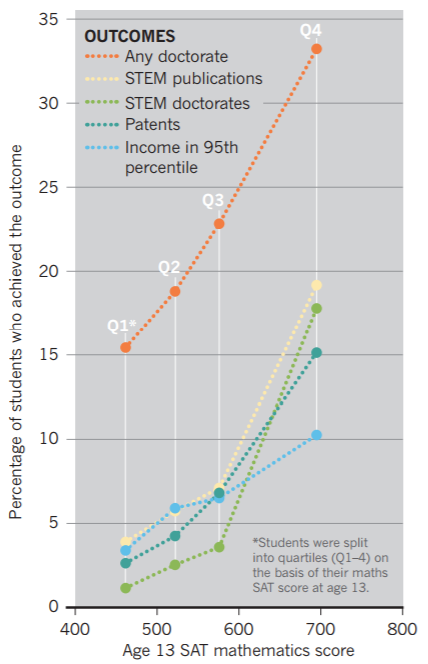 Furthermore, in refutation of Gladwell and others, there is no ‘IQ ceiling’ for success. 13-year-olds in the top 1% are vastly more successful as adults than those only in the top 25%, even though the latter is still well-above average.

One of Terman’s ‘failures’, Lee Cronbach, from the comments, is the “48th most cited psychologist as of 2002” and President of American Psychological Association. Another writes “Yeah, the article talked about ‘only’ becoming Stanford professors… maybe the author doesn’t realize how incredibly hard and rare it is to be a professor at a tier 1 research institution, not to mention being as prolific as Cronbach. The kids didn’t become Nobel laureates but… so? That’s an insane expectation for high achievement.” Compared to Einstein or Freud, Terman’s subjects come up short, but such fame is so exceedingly rare that IQ alone cannot account for it. There were many scientists as smart or smarter than Einstein, yet Einstein and Feynman get the most accolades.

Because the IQ-eminence correlation is so low, even if positive, other psychological factors must be involved that have nothing to do with intelligence. Cox herself revealed as much. Besides assessing her 301 geniuses on IQ, she also took a subset of 100 geniuses for whom the biographical data was particularly good and then measured them on 67 personality traits. Motivational traits emerged as especially critical—persistence standing out above the rest. As she put it: “High but not the highest intelligence, combined with the greatest degree of persistence, will achieve greater eminence than the highest degree of intelligence with somewhat less persistence.” In a sense, the highly eminent are overachievers, attaining more distinction that would be expected from their IQs alone. Natural ability entails not just intelligence, but both passion and perseverance—or what some contemporary psychologists call “grit.”

No one says persistence does not matter, but the evidence also suggests IQ is a necessary but possibly insufficient quality. No amount of persistence will make a person with a low lactic acid threshold and a low VO2-Max a professional endurance athlete, or a dwarf a professional basketball player. Effort allows one to achieve their potential, but such potential is determined by genes. Unfair, maybe, but that is how biology works.

In most dictionaries, the entry for “genius” provides multiple definitions. And getting a score of 140 on an IQ test is not the only one. Here’s another also given by the American Heritage Dictionary: “Native intellectual power of an exalted type, such as is attributed to those who are esteemed greatest in any department of art, speculation, or practice; instinctive and extraordinary capacity for imaginative creation, original thought, invention, or discovery.” That definition definitely fits the top creators in Cox’s 301, but it fails to apply to any of Terman’s 1,500-plus Termites.

Also, one should not lump ‘artistic geniuses’ with intellectual/science geniuses, as has become commonplace. When a 4-year-old scribbles on a piece of paper, his mom displays it on the fridge. When a 40-year-old does it, it’s displayed in a gallery as ‘modern art’. That’s not genius. Submerging a shark in a tank of formaldehyde is not genius, sorry. A definition of genius that is so inclusive that it can include anyone or anything, is meaningless and deprives/devalues recognition from those who are most worthy of it.