On March 1, 2018 Trump announced his intention to impose a 25% tariff on steel and a 10% tariff on aluminum imports.[32] In a tweet the next day, Trump asserted, “Trade wars are good, and easy to win.”[33] On March 8, he signed an order to impose the tariffs effective after 15 days.[2] The EU, Canada, Mexico, Australia, Argentina, Brazil and South Korea were temporarily exempted from the order under a carve-out provision.[34] But Canada, Mexico and the EU became subject to the steel and aluminium tariffs later in an announcement on May 31, 2018.[2][35][36] On March 28, 2018 South Korea became the first country to be granted a permanent exemption from the steel tariff,[37][38] followed by Australia, Brazil, and Argentina on May 2, 2018.[39]

The stock market plunged 10% in early February of 2018, likely in anticipation of the tariffs. I correctly advised people to buy the dip; since then, the S&P 500 has recovered all its losses.

Morgan Stanley estimated that Trump’s tariffs on steel, aluminum, washing machines, and solar panels, as of March 2018, covered 4.1% of U.S. imports.[10] The tariffs measures were poorly received by the vast majority of economists; almost 80% of 60 economists surveyed by Reuters believed that tariffs on steel and aluminum imports would be a net harm to the U.S. economy, with the rest believing that the tariffs would have little or no effect; none of the economists surveyed believed that the tariffs would benefit the U.S. economy.[11]

You can count me in that 20%. I correctly predicted that the economic effect of the tariffs would prove to be minimal or non-existent.

Here is a screenshot of a bunch of headlines from early 2018 about how the tariffs would be bad for Trump and the US economy: 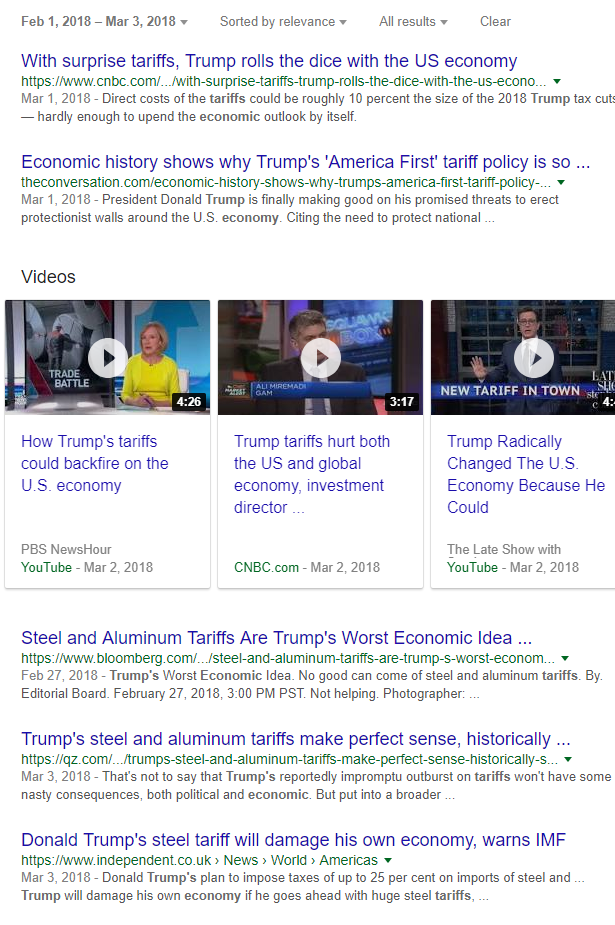 So far, 6 months later, the S&P 500 is at new highs and unemployment is at 3.9%, which is the lowest in over 16 years. Core inflation has only budged a little and is within historical norms:

There is zero evidence the tariffs have hurt the economy.

The difference between experts and everyone is that experts are paid to be wrong, whereas ordinary people pay at their own expense. These overpaid pundits and shills think they know better than the US consumer, better than HBD and IQ. They think that some 2% price hike on some tires, aluminum siding, and washing machines (which hardly anyone will notice or care) will somehow unravel the US economy, which with the rise of the technology sector is moving away from tangible goods and manufacturing anyway.

The experts in 2016-2017 were also wrong about Trump being friendly/deferential to Russia. The exact opposite has transpired. Trump recently imposed sanctions on Russia and also Turkey. Although the tariffs and sanctions have had only a nugatory effect on the US, Mexico, and China, they have hurt these smaller and weaker countries (in agreement with the HBD investing thesis). But all the experts thought China and Mexico would suffer the most under Trump.