Everyone is now talking about Trump being a candidate for the Nobel Peace Prize, from blogs to major media publications. A Google search yields numerous top-stories about the possibility, when just a month ago it wasn’t even a consideration: 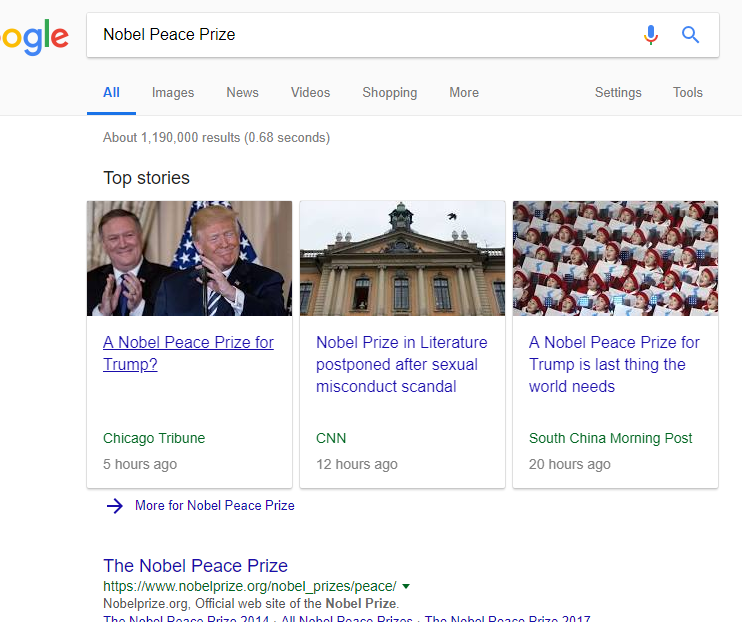 In post from April 21st, weeks before the story picked up, Biggest winners of the Trump administration: centrists, moderates; biggest losers: the far left, I concluded by envisaging the possibly of Trump being a Nobel contender.

Although I cannot take credit for predicting it, it’s further evidence of how this blog tends to be one or two steps ahead of everyone else. If I say something is going to be a certain way or is, that’s usually how it is.

Second, in the post Conveying action is as effective as action, also published almost a month ago, I predicted that Amazon stock, which was battered by Trump’s tweets accusing the retailer of ‘stiffing’ the US Post Office, would quickly recover, which it has. The trend has always been for Trump to talk a tough game but give no follow-through or to capitulate easily, and this time involving Amazon was no different. It’s like “durr dur Amazon costing post office big money durr” Amazon is sure trembling at that barely cogent tweet. In fact, there have been very few stories in the past three weeks since Trump’s original tweet, suggesting no follow-through or intent to pursue it further. Of course, that does not mean there isn’t stuff going on behind the scene, but if past trends are of any predictive value, nothing will come of it and it will be forgotten. Trump already accomplished his goal , which is creating the illusion of taking action against Amazon and also signaling to his base, which is good enough.

So that is two correct predictions in the span of a month. Not bad. It does not require any special skill–just a basic understand of how things work, some psychology, and so on.