An NBER study Goal Setting, Academic Reminders, and College Success: A Large-Scale Field Experiment, which demonstrates that goal-setting programs do not boost college GPAs, went viral, having been shared and up-voted many times on Reddit. The paper was published in August 2017, but didn’t get attention until only a week ago.

This paper presents an independent large-scale experimental evaluation of two online goal-setting interventions. Both interventions are based on promising findings from the field of social psychology. Approximately 1,400 first-year undergraduate students at a large Canadian university were randomly assigned to complete one of two online goal-setting treatments or a control task. Additionally, half of treated participants also were offered the opportunity to receive follow-up goal-oriented reminders through e-mail or text messages in an attempt to test a cost-effective method for increasing the saliency of treatment. Across all treatment groups, we observe no evidence of an effect on GPA, course credits, or second year persistence. Our estimates are precise enough to discern a seven percent standardized performance effect at a five percent significance level. Our results hold by subsample, for various outcome variables, and across a number of specifications.

Normally such a study would not get so much attention, but it directly involves Jordan Peterson’s self-authoring program, which Dr. Peterson supplied free of charge for study. The problem is, the self-authoring program failed, at least according to this study, to boost GPAs, even for bottom-quintile students (whom would presumably stand to benefit the most from the program). Here is a screenshot of the most important part of the paper: 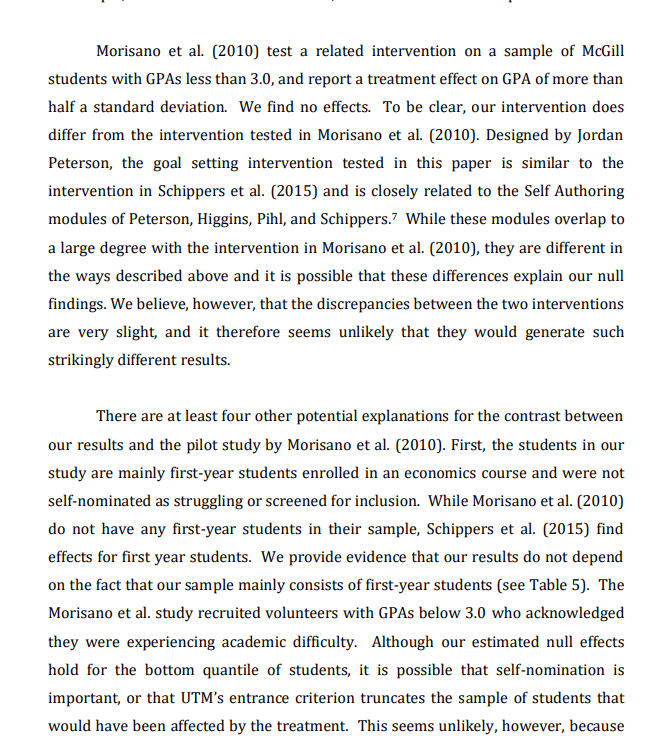 Even as a Jordan Peterson supporter, it’s hard to sugarcoat this. The results are null, nugatory for all GPA quintiles. Without knowing the results of the study beforehand, I would have expected at least a modest .25 GPA boost, but it didn’t even do that.

This confirms what I have suspected about IQ being way more important than study habits in terms of university success, or any sort of cognitive endeavor. The ability to memorize is very g-loaded and is not something that can be improved easily through study, as some may think. Same for writing ability, reading comprehension, and other important skills for college success.

Initially I assumed that the self-authoring program makes no promise of boosting academic performance, but according to the homepage of selfauthoring.com it does:

He should probably redact that claim. At best, it’s inconclusive if self-authoring improves GPA. The Morisano (2010) study showed improvement, but a replication using Dr. Peterson’s self-authoring program did not.

Dr. Peterson’s problem is that he has to reconcile his deterministic views of IQ, which are correct, with his message of self-improvement and ‘becoming oneself’, which are possibly more erroneous. To “become one’s self” is deterministic, as one’s capacities are predetermined by the limitations imposed by IQ and other properties intrinsic to the individual, but people with average IQs probably don’t want to be told they have to settle for a mediocre-paying, low-status job. Such a program would not sell that well.

The unpleasant truth is, no amount of conscientiousness will allow some who is less intelligent to grasp abstract concepts as readily as individuals who are much more intelligent, all else being equal. That’s why in a video, as an example, Dr. Peterson advises that someone with an IQ of 100 should not become a lawyer…he doesn’t say it’s impossible, but someone with an average IQ would be outmatched by his much smarter peers, assuming he even gets into law school. But, yes, even the smartest person has to study at least once, but the returns are diminishing beyond a certain point, and that point is set by IQ.

People who are less intelligent require more repetition, and sometimes in spite of this the concept never ‘clicks’. This is analogous to radio-frequency waves vs. gamma waves, in which a higher IQ corresponds to a shorter wavelength. It’s a myth that one can get cancer from cellphones and microwave ovens; you cannot, and this is because radio waves ( non-ionizing radiation) are not short enough to cause cellular damage. No amount of exposure non-ionizing radiation will alter the DNA of cells. Repeated exposure to long-wave radiation is like a car impacting a wall at 1 MPH 100 times, whereas short-wave exposure is like a single impact at 100 MPH. The latter is enough to total the car, but the former results in superficial damage (such as scratches to the paint). Likewise, for the less intelligent person, repeated exposure to the material is never enough to forge the necessary mental connections that give rise to understanding.