In March 2014, after French economist Thomas Piketty released the English version of his doorstop of a book Capital in the Twenty-First Century (much of which has been discredited [even the NY Times admitted so]), I made two predictions: that wealth inequality would keep widening and that it would not pose a threat to the economy. Nearly four years later, as the S&P 500 crosses 2650 (a 30% gain from early 2014) and the post-2009 bull market and economic expansion enters its 9th year (the longest ever), not only has wealth inequality widened to widths never before imagined, but there are no signs of revolt, crisis, or recession due to such inequality. So I was right again there, too. Piketty’s findings are probably correct in certain instances, in which the growth of capital exceeds national economic growth, but this is only limited to certain economies, regions, and industries (such as tech and Silicon Valley), does not pose a threat to the greater economy, nor is it a pressing economic problem or unsustainable.

Rising wealth inequality is simply the manifestation or byproduct of an economy that is becoming increasingly efficient, globalized, and centralized among a handful of important multinational firms (such as Google and Facebook), where the out-sized contributions of a handful of individuals (such as Amazon CEO Jeff Bezos) is equal to the contributions of millions or even billions of people. If five tech firms control a third of the global economy, it would not be a surprise if the people who run these companies are wealthy, and if one person creates a company that creates a trillion dollars of economic value (both directly and indirectly), such a person is the richest person in the world, similar to John D. Rockefeller in 1902.

Many on the left will show a similar graph as the one below, of how wealth inequality is wider now than before the Great Depression, suggesting that therefore history must repeat itself: 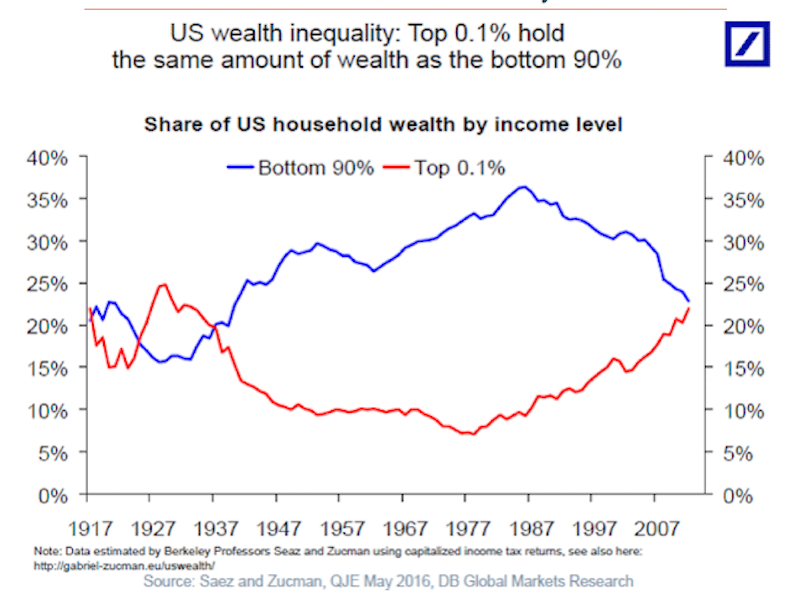 However, conditions in the late 20’s were very different than they are now. Leverage was much higher, there was no globalization or inter-contentedness, and only limited help from major central banks [1]. Also, the market was about 50% more overvalued (PE ratio of 30 vs 20 today). The Great Depression saw a significant contraction of economic activity and a massive rise in unemployment, yet every economic indicator shows America is nowhere near similar circumstances. Even if the stock market were to contract, one would need a long and deep recession in order for such selling to be sustained. Also, given the severity and rarity of the Great Depression, it’s unlikely it will ever happen again and can be disregarded as an outlier or coincidental rather than causal.

[1] Although the Federal Reserve was established in 1913, it was ineffective during the Great Depression because it failed to provide liquidity as it was supposed to:

But in 1928–32, the Federal Reserve did not act to provide liquidity to banks suffering runs. In fact, its policy contributed to the banking crisis by permitting a sudden contraction of the money supply. During the Roaring Twenties, the central bank had set as its primary goal “price stability”, in part because the governor of the New York Federal Reserve, Benjamin Strong, was a disciple of Irving Fisher, a tremendously popular economist who popularized stable prices as a monetary goal. It had kept the number of dollars at such an amount that prices of goods in society appeared stable. In 1928, Strong died, and with his death this policy ended, to be replaced with a real bills doctrine requiring that all currency or securities have material goods backing them. This policy permitted the US money supply to fall by over a third from 1929 to 1933.[10]

When this money shortage caused runs on banks, the Fed maintained its true bills policy, refusing to lend money to the banks in the way that had cut short the 1907 panic, instead allowing each to suffer a catastrophic run and fail entirely. This policy resulted in a series of bank failures in which one-third of all banks vanished.[11] According to Ben Bernanke, the subsequent credit crunches led to waves of bankruptcies.[12] Friedman said that if a policy similar to 1907 had been followed during the banking panic at the end of 1930, perhaps this would have stopped the vicious circle of the forced liquidation of assets at depressed prices. Consequently, the banking panics of 1931, 1932, and 1933 might not have happened, just as suspension of convertibility in 1893 and 1907 had quickly ended the liquidity crises at the time.”[13]