Among boomers and even gen-x, the correlation between wealth and IQ isn’t very strong, or at least it isn’t nearly as strong as it is with millennials and gen-z. There are plenty of rich medium and low-IQ boomers–often blue collar entrepreneurs, pensioners, real estate owners and developers, or those who simply saved and invested money. But for millennials and gen z.- due to the Bell Curve becoming reality, automation and outsourcing potentially depressing real wages, the decline of unions and pensions, and also due to entrepreneurship being too difficult and rent and other expenses being too high–the correlation between IQ and wealth has never been higher. Easy access to capital and a less competitive economic environment allowed less intelligent but ambitious boomers to become wealthy, but those days are gone, and only the smart make lots of money, but more importantly, keep it. Post-2008 economic trends favor assets over entrepreneurship and middle-income wages. The ‘middle-class squeeze’ that many write about is really just a squeeze on the less intelligent, or even individuals of average intelligence.

Although millennial celebrities can make good money in spite of having average or below-average IQs, they are outliers, and they tend to have trouble keeping their money, due to conspicuous consumption and impulsivity that comes from having a high time preference and not being smart. Trade schools, despite the hype, involve a lot of debt and the the certificates are not only expensive and time consuming to obtain, but often useless [1], and there is also a lot of nepotism in the trades.

Contrary to the popular leftist narrative that all millennials are poor and neck-deep in debt, when you stratify millennials by IQ, the picture changes dramatically. High-IQ millennials are not only doing well–aided by nearly a decade of unprecedented asset inflation and the biggest and longest bull market in stocks ever, a strong real estate market, and an economic environment that favors smarts–they are running laps around their less intelligent peers, but also even boomers, who had five decades of post-WW2 economic prosperity. High-IQ millennials are getting wealth and recognition through:

–Stock trading and investing. On popular subs such as /r/investing and /r/wallstreetbets, it’s not uncommon to find posts by millennials who have high five and six-figure trading accounts with substantial gains in tech stocks and other investments. Here are some examples taken from the front page, and there are dozens or even hundreds more like those, so it’s it’s not like I’m cherry picking. These are smart millennials who pick the best stocks and sectors, such as tech, and avoid poor performing low-IQ sectors such as energy and mining, They also make lot of money with STEM jobs, that they use to fund their stock accounts. There is evidence that high-IQ people are better at market timing and stock picking, but also that fund managers from prestigious schools (which select for high IQ) have higher returns: 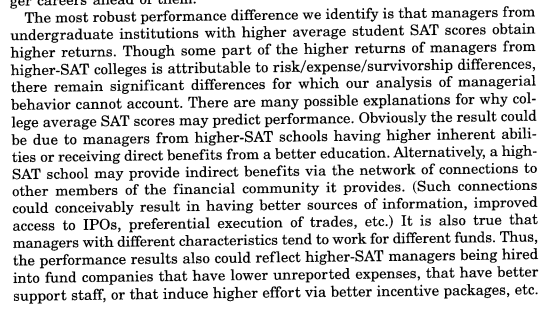 –STEM jobs, especially coding, but also finance. Despite all the hysteria over high living expenses, a frugal tech worker living in Silicon Valley will have a lot of disposable income. These jobs have also seen the highest inflation-adjusted wages since 2009 and are the most impervious to inflation, unlike retail jobs.

–Legal, healthcare, government, and lucrative NGOs such as think tanks and consulting. Federal and state governments hire lots of math and econ PHDs and pay them well. Lawyers and doctors, despite the debt, as always, make good money. Secretive and elite NGOs and proprietary firms headquartered in Manhattan and Connecticut pluck high-IQ millennials, often right out of graduation from their elite colleges. Such jobs not only pay well but bestow connections later.

–Web 2.0 and other tech start-ups (very rare, although the payoffs can be huge)

–Coding, math, and physics jobs and teaching. These may not pay as much as above, but they bestow a lot of status online, and there is compelling evidence status is worth as much as money. A decade ago, being good at math was low or medium status; now it’s high status, especially on blogs, on Reddit, and sites such as Math Overflow and Physics Overflow.

–Social justice and the liberal arts. Like above, although these occupations don’t pay much, they bring a lot of status and recognition such as on Twitter and in print and digital media, but some activists make solid incomes on Patreon, by giving speeches and talks, and writing books and columns. Many on the ‘right’ say women’s studies is a ‘useless degree’, and I agree it’s useless in terms of value to society (unlike, say, civil engineering), but if you get paid to do what you like (and there is evidently a large market for social justice), and you get a lot of recognition and status too, then at the individual level how useless is it really. Given how so many people willingly donate to social justice causes and read social justice columns, these activists and justice-warriors are responding to a market demand. Philosophers, lit majors, and historians also have a lot of status online as part of the post-2008 intellectualism boom, and such degrees, although they don’t pay as well as STEM, are still valuable in terms of being intellectually enriching and bestowing status to whoever holds them. This is also related to the decline of new atheism in that the monastic, ascetic pursuit of intellectualism is respected.

–Speculative assets such as Bitcoin and other currencies. The total value of all Bitcoins and alt-coins exceeds $180 billion, a 1,000% gain from just a year ago. There are hundreds, maybe even thousands, of millennials who have quietly amassed fortunes in these currencies. A 9-5 worker worker would have to work half a century (at $20/hour and 40 hours/week) to have the pre-tax wealth of someone who merely bought a couple hundred dollars of Bitcoin in 2010-2012 and didn’t sell. Isn’t that like winning the lottery? No, because this is something anyone could have conceivably done by either buying Bitcoin or mining them, unlike guessing correct numbers, which is pure chance. Although there is a luck factor in terms of identifying investment opportunities early, that is not the same as randomness and chance. That’s why you have to keep your eyes peeled to new opportunities.

–Social media and brand building, such as through Instagram, YouTube, Vine, Tumblr, and Twitter. This includes fitness and bodybuilding Instagram accounts, YouTube makeup tutorials, and women posting pictures online. Many millennials, who were unpopular or ‘geeky’ in high school, are finding fame and fortune through social media. This combines wealth and individualism of the wealth-individualism-intellectualism triad. From the post, The Gift of Autism:

Philip E. Mason, a British scientist with a PHD in chemistry, known as Thunderf00t on Youtube, is one such example of a ‘STEM celebrity‘, with thousands of followers, who rose to online stardom not only for his knowledge of science but his willingness to skirt political correctness in much overdue criticism of SJW-feminism, which until the likes of Thunderf00t and Sargon of Akkad, for years went unchallenged. It doesn’t even have to be autism – it’s simply the ability to appeal to logic and reason over political correctness.

For example, I would be willing to wager that all these ‘Tumbler teens‘ who have hundreds of thousands of followers and are making more money than their parents, are probably ‘nerds’ in real life, only to become the center of the world in these burgeoning online ‘ecosystems’. Meanwhile, offline, people who may have been popular in high school in the 70′s and 80′s, decades later, deal with inflation-lagging wages, bills unpaid, all the while toiling in obscurity in unfullfilling jobs and a paycheck or two away from homelessness.

None of these involve ‘starting a store/shop,’ as would have been the case for boomers decades ago. Everything is digital, financial, and or cognitive, and the returns on an inflation-adjusted basis are much more substantial, as well as much more status. Even as recently as a decade ago, few 20-30 year olds, unless they were celebrities or born into money, had so much wealth, yet the liberal media keeps insisting that all young people are poor, which may have been the case 30-50 years ago, but not anymore. That’s also why Bernie Sander’s campaign failed, not only because Hillary and the DNC ‘rigged’ it, but because his defeatist, impractical nostalgia for a return to overpaid unions jobs doesn’t gel with reality. People want a message of opportunity and hope, not how bad things are (even if, for the less intelligent, they aren’t that good). But also, successful, smart donors don’t want to be made to feel guilty for the success they earned.

Meanwhile, less intelligent millennials who were ‘popular’ in high school are toiling away in anonymity in low-paying, low-status service sector jobs that don’t keep up with inflation. What a reversal of fortune. Some are in construction or energy, which pays better than the service sector, but such jobs have high occupational hazard risks and are very sensitive to macro economic uncertainty [hundreds of thousands of blue collar workers were laid off in 2008 and 2014 due to the housing and fracking busts, but tech, legal, and professorial jobs have proven far more resilient].

[1] Several for-profit schools, including Corinthian Colleges and ITT Technical Institute, have shut down in recent years after regulators cracked-down.