A certain political tribe likes to make the augment that if America adopted Australia’s gun control laws that gun homicides would fall. From Vox The Weeds: Australia solved its gun problem. Could America?

Through that program, the government was able to get rid of about 650,000 guns. But as Sarah notes, the program went further still, introducing a ban on automatic and semiautomatic weapons, putting in new licensing requirements, and making people wait 28 days before they purchased a gun.

The proposal worked, with suicide rates in Australia dropping about 57 percent after the reforms were implemented, and homicide rates dropping 47 percent, according to studies by Harvard researchers.

But was it really a success, or is such purported success a coincidence or even non-existent? The first thing to note is how suicides are now lumped with homicides. This seems like moving the goalposts: the left initially arguing for gun control to prevent homicides, but if homicides don’t fall enough, touting suicide reduction as evidence of success of the program.

For example, Australia’s decline in homicides mirrors an overall global trend that began in the 90’s: 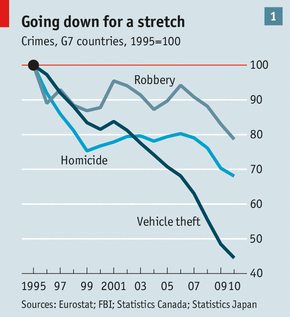 Although suicides fell precipitously after 1996, firearm homicides didn’t budge much: 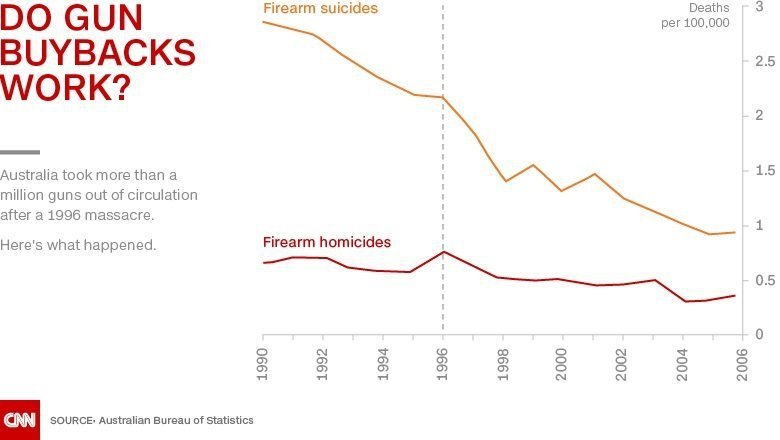 Again, you can see how it didn’t fall that much: 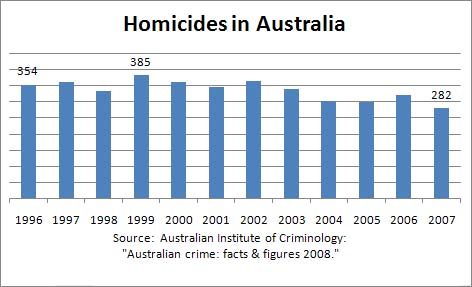 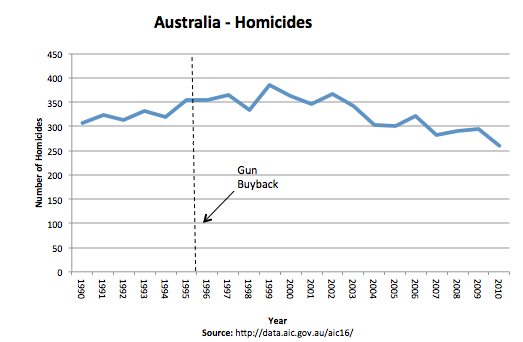 You can see how the decline in deaths is part of a longer-standing trend, so any success of the 1996 law may merely be coincidental: 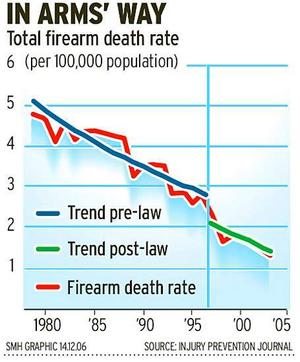 Using the same +-7 year span before and after the Australian gun “ban,” all other things being equal, the theory states that America’s homicides would have gone wildly higher since Americans were continuing to buy guns in annually increasing numbers.

Hillary is not going to be happy. As the chart demonstrates, homicides fell faster and further in America than Australia. Given Oz’s relatively low starting homicide rate, they perhaps had less free fall room than the United States. But this decline occurred during a period when America went from 16 to 36 states (32% to 72%) that allowed people to carry concealed firearms in public, and for which many of the states rolled back firearm restrictions. 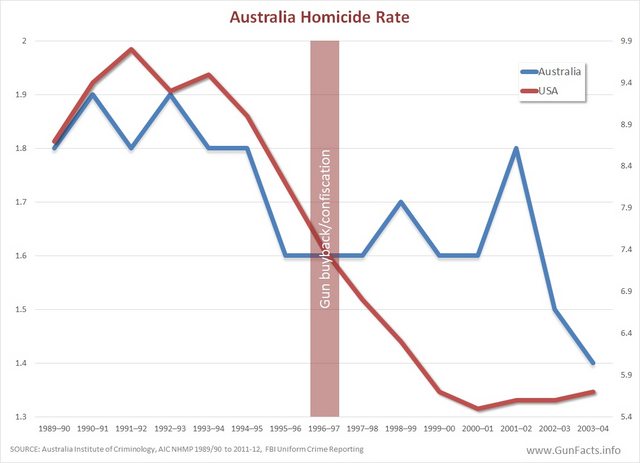 From a 2009 report, RESULTS OF THE ’96/’97 AUSTRALIAN GUN LAWS & BUYBACK, regarding gun suicides, the decline is also likely the continuation of a long-standing trend:

One may wonder (from looking at the graph) if a trend in gun suicide had started from ’93 to ’96, in which case it could be argued that gun suicide dropped abruptly in ’97 and ’98, interrupting the trend. It is very possible. The ’93-’96 points lie very close to a straight line. Another year or two of data points along the line would have made it quite probably a trend. A trend of only three years cannot be well proven because the possibility of such patterns occurring from chance alone is too great. If ’93 to ’96 was a trend, the post-’96 trend still appears to be heading towards getting back on the ’93 to ’96 trend line in a few years. Note too that the values from ’01 to ’04 look much like a nonlinear trend, largely because of the small departures from the curve.

But most telling, armed robbery did not fall:

The evidence seems pretty conclusive that the 1996 Australia gun ban and buyback program had either no effect, or any decline in homicides and suicides may have been attributed to long-standing declines in crime than purported efficacy of legislation.