For reasons that are unknown to me, Taleb is still highly regarded by the ‘right’ despite being more anti-HBD than even the SJW-left.

OK, OK, I will say it publicly.

I viscerally don't like S. Pinker, but I will take every RISK to help him fight insidious censorship.

Viscerally..that’s a strong word, all for what? For the intellectual crime of believing that the world is becoming less violent? During the IQ wars, it was Taleb, not Pinker who started it:

Nicholas Nassim Taleb, an irascible liberal and ally of Malcom Gladwell, accused Pinker of falling for the fallacy of survivorship bias as well as other statistical oversights in his claim that the world had become less violent, as Pinker’s argument allegedly failed to account for ‘black swans’ such as nuclear war.

If not just Pinker who is the subject of Talebs’ liberal, anti-HBD ire: other targets include Sam Harris, Richard Dawkins, and Charles Murray (pretty much anyone who defends human genomic research and IQ research and doesn’t subscribe to a ‘blank slate’ view of humanity)

Taleb makes more money giving speeches, writing books, and and selling $7,000 ‘risk management’ seminars than actual option trading, whereas people like Dawkins, Harris, and Pinker actually practice what they preach and have actual skin in the game. There is actually no evidence Taleb has ever made money trading or with his purportedly superior’ risk management skills’.

Here are some recent tweets where he fallaciously equates GWAs studies with neural networks:

Friends, added an Appendix to the minority rule.
For comments.
Is it easy to grasp? pic.twitter.com/J0fCc91wf5

Going though the documents, he does not mention IQ or IQ genes at; he just throws up a bunch of math implying “dur dur I’m right dur”. He does this all the time. He expects everyone to be stupefied by his math knowledge and just nod along. He never explains anything explicitly because otherwise it would be too easy to show how he is wrong.

GWAS studies have shown a positive correlation between between national IQ and polygenic score:

Race and IQ: the Case for Genes

A review of intelligence GWAS hits: Their relationship to country IQ and
the issue of spatial autocorrelation 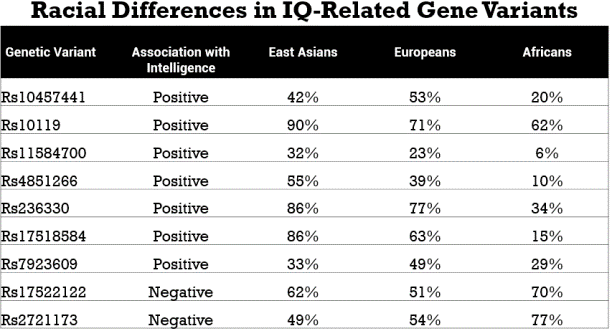 Taleb is saying that because we can’t prove ‘A’ it means ‘B’ is false even though the two are unrelated. Simulating a worm brain is a different problem than finding loci for intelligence, yet Talab is making a false equivalence and hoping no one notices the fallacy of this reasoning. Instead of reconstructing the neural pathways of the brain from scratch, all we need to do is sequence a bunch of genomes from different groups and see how they differ. As shown by the links above, progress has already been made. This is a problem that can be approximated in polynomial or linear time to the number of SNPs sequenced, not exponentially as Teleb erroneously assumes. [2] But most importantly, steady progress is being made in intelligence research despite Taleb’s insistence that such problems are computationally impossible. Taleb’s argument is a red herring/diversion to distract people from the fact he has no argument and is very biased against intelligence research and is intellectually dishonest.

[1] Taleb’s reasoning is fallacious because he forces Pinker to prove a negative (that there won’t be a black swam that will cause millions of deaths at once; obliviously, such a proof is impossible). Taleb’s argument hinges on the incidence of violence having an infinite and or indeterminate variance.

…regarding Pinker’s “Better Angels of Our Nature”, which argues that the world has become less violent, Taleb’s counters that we don’t know the ‘true’ variance of the distribution that underpins violence, meaning that Pinker is not accounting for possible black swans like nuclear war that may kill millions of people at once. Taleb uses this argument against all his critics, but the problem is, methodologically, such an argument is fallacious. Taleb is invoking the argumentum ad ignorantiam logical fallacy by forcing Pinker prove that there won’t be nuclear war or some black swan, and in the absence of such a proof Taleb must be right. Of course, such a proof is impossible. Whereas Pinker’s arguments involve empirical evidence of how the world is safer, Taleb waves it away by forcing Pinker to prove a negative: that nuclear war (or some other great crisis) won’t happen. this is probably my favorite anti-Taleb post I have written